Promises Obama couldn't possible keep before the the November election

was the mainstay of his State of the Union Address. A litany of legislation that

needs Obama's tutelage, or this nation is likely to perish from the face of the

earth. In his newest con job on the  American people Obama again promises

the world based on his failed policies, and economic immaturity. Well that should make

the 16 million or so Americans out of work very comforted. Careful to mention a kinder

irresponsibility is just pandering to the status quo. In conclusion this president doesn't care that

affected by. His middle class mantra is nothing more that a cheap trick to again fool those

most in need. Less leadership, more campaign, it's the Obama way.

Hats off to journalism with a responsibility to print the truth.

working citizens, who just happened to be successful?
Theodore Miraldi
The Bronx
***

able to make between the 99 percent and the 1 percent in our country.

Over and over again, Republicans will cry “class warfare” and call Obama “a divider.” But for over 30

years, Republicans’ trickle-down economics and perpetual call for permanent tax cuts for the rich have

widened the division between the haves and have-nots — their version of divisive class warfare.

The 2012 election should be all about strengthening the middle class and poor.

Here's a superb example of Obama's promise of transparency, as Michelle Malkin has peviously

stated,  "Hispanic civil-rights advocate as a win for the middle class.” Prior to her first

immigrants. How transparent does it get? Obama's stimulus package helped illegals acquire

low cost loans to help refinance mortagages they didn't qualify for to begin with. Promoting

public. Now we have a domestic policy advisor who's only agenda is to promote the rights of

the Hispanic middle class. It appears most of us have become second class citizens

Who says Obama has accomplished nothing.....

People are always saying B Hussein Obama hasn't accomplished anything. But contrary to popular belief, B Hussein O has an impressive list of accomplishments!

Posted by theodore miraldi at 7:56 PM No comments:

Loose lips sink ships, just ask some of the Republican candidates after being hijacked by cable

news and the drone of inane questioning from the mediocre moderaters. This over-exposure did little

to define a front runner as the results of the Iowa caucus accomplishes a big zero. Padded by Independents

more apt to vote for anyone but a Republican has once more shown its irrelevance. The 8 vote win by Romney

must have Obama licking his chops. The Republicans must take heed of the reality show disaster and come together

around one candidate. Like him or not Romney can beat Obama in a general election, and after all that's what the

American public wants in 2012. Romney and Allan West would give Obama the beating he deserves.

Do right by the kids: Demand quality teachers NYPost 1/9/2012

The Issue: The city and union’s failure to agree on a new teacher-evaluation system for schools.
***
I applaud Schools Chancellor Dennis Walcott for telling it like it is: The problem with education in

this city are the teachers and the unions (“Race to the Bottom,” PostOpinion, Jan. 3).

The teachers in the front of the classrooms are the reason our children perform so poorly.

In an effort to do everything possible to hold on to jobs they don’t deserve, teachers ruined the chance

to receive $60 million in federal funding for schools.

This is not rocket science, it’s sheer corruption. Poor-performing teachers equate to low-performing

students. Thanks to Walcott for putting a face on stupidity.


Read more: http://www.nypost.com/p/news/opinion/letters/do_right_by_the_kids_demand_quality_CvbQ3nao3FQgUxi5Q8P78L#ixzz1iy6jOp6K
Posted by theodore miraldi at 8:51 AM No comments:

Straight from the mouth of Warren Buffett...... 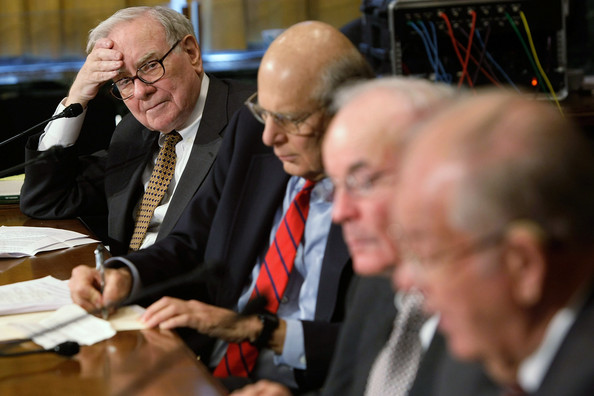 Warren Buffett, in a recent interview with CNBC, offers one of the best quotes about the debt ceiling:
"I could end the deficit in 5 minutes," he told CNBC. "You just
Pass a law that says that anytime there is a deficit of more
Than 3% of GDP, all sitting members of Congress are ineligible
For re-election.

The 26th amendment (granting the right to vote for 18 year-olds)
Took only 3 months & 8 days to be ratified! Why? Simple!
The people demanded it. That was in 1971 - before computers, e-mail,
Cell phones, etc.

Of the 27 amendments to the Constitution, seven (7) took one (1) year
Or less to become the law of the land - all because of public pressure.

Warren Buffet is asking each addressee to forward this email to
a minimum of twenty people on their address list; in turn ask
Each of those to do likewise.

In three days, most people in The United States of America will
Have the message. This is one idea that really should be passed
Around.
Congressional Reform Act of 2011 _

A Congressman/woman collects a salary while in office and receives no
Pay when they're out of office.

3. Congress can purchase their own retirement plan, just as all
Americans do.

4. Congress will no longer vote themselves a pay raise.
Congressional pay will rise by the lower of CPI or 3%.

6. Congress must equally abide by all laws they impose on the
American people.

7. All contracts with past and present Congressmen/women are void
Effective 1/1/12. The American people did not make this
Contract with Congressmen/women.
Congressmen/women made all these contracts for themselves. Serving in
Congress is an honor, not a career. The Founding Fathers
Envisioned citizen legislators, so ours should serve their
Term(s), then go home and back to work.

If each person contacts a minimum of twenty people then it will
Only take three days for most people (in the U.S.) to receive
The message. Don't you think it's time?
THIS IS HOW YOU FIX CONGRESS!
Posted by theodore miraldi at 8:50 AM No comments: