NEW YORK – Does a family photograph of a young Barack Obama posted on the president’s Facebook campaign page offer a clue to the identity of his real father?
A professional graphic artist who examined the 1973 photo believes the image of Obama’s mother, Ann Dunham, was airbrushed into the scene to cover up an African-American man who was standing next to Obama at the Honolulu airport.
Filmmaker Joel Gilbert, who commissioned the analysis, told WND there’s substantial evidence that the man in the original photograph was Frank Marshall Davis, the Communist Party member, pro-Soviet propagandist and pornographer who played a fatherly role in Obama’s teen years.
In his full-length documentary “Dreams from My Real Father,” Gilbert presents a compelling case that Davis was Obama’s biological father as well as his ideological mentor. He believes the Dunham family recruited the Kenyan student Barack Hussein Obama to act as the father, to cover up an illicit affair with a subversive political activist.
Gilbert posted a page on his website at the time this article was published with details of his find.
Joel Gilbert’s “Dreams from My Real Father” is on sale now at WND’s Superstore
Gilbert says the black male hand under Obama’s armpit is strikingly similar to the right hand of Davis.
“We know from Obama’s own writing and interviews with Davis’ neighbors, that Obama was a regular visitor to Davis’ house from age 10,” Gilbert told WND. “This doctored photo on Obama’s own Facebook page seems to be part of a pattern of document forgery by President Obama to hide his biological and ideological relationship to communist Frank Marshall Davis.”
Obama would have been about 12 years old at the time the photo was taken. The image also shows Obama’s half-sister, Maya, and his grandfather, Stanley Dunham.
After Gilbert saw the photo on Obama’s Facebook page, he found a clearer version on the Web that he used in his video. The image used in his video has not been enhanced.
Gilbert commissioned Robert Nikolakakis, a professional graphic artist and illustrator from Montreal, Canada, to examine the photograph.
See the detailed analysis of the Obama photo by Robert Nikolakakis
“There seem to be several suspicious anomalies in this family photo depicting President Obama as a child along with his half-sister, mother and grandfather,” Nikolakakis wrote in a report.
“All suspected alterations to the photo seem to point to the cutting, pasting and airbrushing of Barack Obama’s mother, Ann Dunham, into the photo to cover up someone of African-American origin,” he wrote.
Nikolakakis, with 21 years experience as an illustrator and graphic designer, has created websites, corporate identities, editorial illustrations, photo retouches and photo-manipulations for television shows, film studios, magazine publishers and photography studios. He as also served as a consultant for old-age special-effects makeup and has contributed to tutorials on photo manipulation. 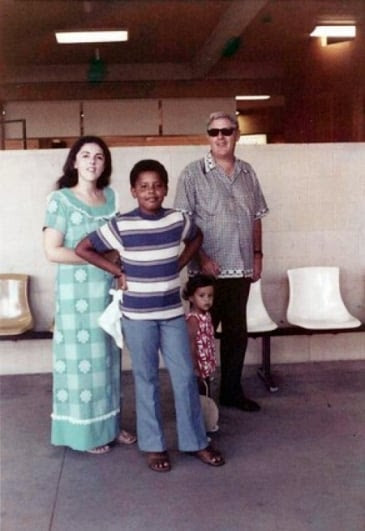 A clearer version of the photo on Obama's Facebook page
His analysis of the Obama photo found at least half-a-dozen anomalies:
“This photo forgery appears to be part of Obama’s ongoing campaign to minimize, misdirect and outright lie about damaging information about his past,” Gilbert said. “I hope the media will now demand that he come clean about his family background, his political foundations and fully reveal his agenda for transforming America.”
In his film, Gilbert shows how Davis indoctrinated Obama with a political foundation in Marxism and an anti-white worldview. 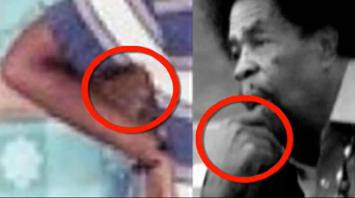 Screen grab from Joel Gilbert video shows comparison of hand in Obama family photo with photo of Davis
“This is a known phenomenon in the radical left, referred to as “red diaper babies” or “hand-me-down Marxism,” he noted.
He pointed out that much of the leadership of 1960s Marxist groups such as Students for a Democratic Society and the Weather Underground were children of Communist Party USA members, including Katherine Boudin and Jeff Jones.
President Obama’s chief campaign adviser, David Axelrod, also is a “red diaper baby,” Gilbert said.
As WND reported Tuesday, a new book by Paul Kengor, “The Communist: Frank Marshall Davis: The Untold Story of Barack Obama’s Mentor,” documents Davis’s work for the Communist Party and his influence on Obama.
Weekly visits
As WND reported, Gilbert discovered racy photos published in vintage fetish and bondage magazines of Obama’s mother, Stanley Ann Dunham, that he believes were taken by Davis. The photos, he says, bolster his belief that Dunham had an intimate relationship with Davis.

Frank Marshall Davis
In his film, Gilbert documents that Ann Dunham gave her father, the “Gramps” of Obama’s autobiography, instructions to make sure her young son would be taken regularly to visit Davis while she was in Indonesia.
Obama mentions “Frank” 22 times in his autobiography, “Dreams from My Father,” without using his full name.
Gilbert believes the only scenario in which Obama’s weekly visits as a child to Davis’ home would make sense is if Davis was the biological father
Much of what Obama has told the American public of his childhood has been proven false, he said.
“We now know that the family did not stay together in Hawaii until 1962, when the Kenyan Barack Obama went to Harvard to begin his graduate studies as Obama claimed,” said Gilbert. “Ann Dunham took her infant son with her to Seattle a few weeks after his birth and began studies at the University of Washington, while the Kenyan Obama remained in Hawaii for another year before leaving for Harvard.”
The evidence, he said, “points to the conclusion that Ann Dunham’s relationship with the Kenyan Obama was a sham marriage designed to cover up an illicit affair with Frank Marshall Davis in which an infant was conceived.”
Obama’s election was not a sudden political phenomenon, Gilbert maintains.
“It was the culmination of an American socialist movement that Frank Marshall Davis nurtured in Chicago and Hawaii and has been quietly infiltrating the U.S. economy, universities and media for decades,” he said. “To understand Obama’s plans for America, look no further than communist Frank Marshall Davis.”