A Nation in Disgrace... 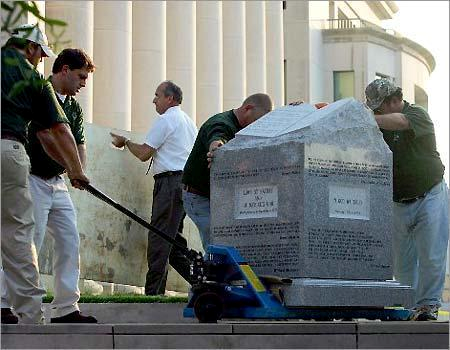 (Picture of 10 commandments monument being removed from government building)

This may be the only image voters need to see that correctly states the position of the Obama administration and liberal/ progressives that wish to mold the world in their own image. Before Monotheism who ever was in power dictated to their subjects the morals and ethics they must follow.
As leadership changed, these rules of society changed leaving behind a population that lived in anomie. Our Founding Fathers saw the necessity to follow universal principles rather than those made by man alone. Humanism has no stability as proven through thousands of years in human history. This is an affront
to our Institutions by an Administration headed by a Christian? A Muslim? Or, just another narcissist who thinks he is God!
theodore miraldi

This post was inspired by  Kimber Chitwood
Posted by theodore miraldi at 11:59 AM