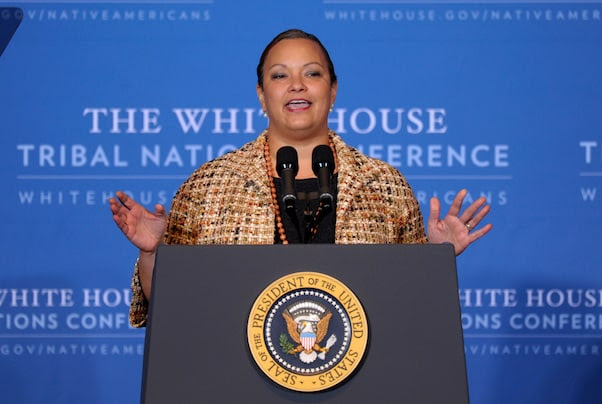 Susan Walsh/AP - EPA Administrator Lisa Jackson speaks at the 2012 Tribal Nations Conference earlier in December.Jackson, who pushed through the most sweeping curbs on air pollution in two decades, announced Dec. 27, 2012 that she will resign her post.
Environmental Protection Agency Administrator Lisa P. Jackson, who pushed through the most sweeping curbs on air pollution in two decades, announced Thursday morning that she will resign her post.
Jackson, who will step down shortly after President Obama’s State of the Union address next month, has not accepted another job, according to several individuals who have spoken with her. Many expected that she would not remain for the administration’s second term; Jackson herself joked about it recently.
Outspoken on issues including climate change and the need to protect disadvantaged communities from experiencing a disproportionate amount of environmental harm, Jackson pressed for limits on emissions from coal-fired power plants as well as the dumping of mining waste into streams and rivers near mines.
The slew of rules EPA enacted over the past four years — including the first-ever greenhouse gas standards for vehicles, cuts in mercury and other toxic pollution from power plants and a tighter limit on soot, the nation’s most widespread deadly pollutant — prompted many congressional Republicans and business groups to suggest that Jackson was waging a “war on coal.” But it also made Jackson a hero to the environmental community, who viewed her as their most high-profile advocate within the Obama administration.
In a statement, Jackson thanked Obama “for the honor he bestowed on me and the confidence he placed in me four years ago this month when he announced my nomination,” and noted that the agency had taken action on issues ranging from global warming to water quality.
“So, I will leave the EPA confident the ship is sailing in the right direction, and ready in my own life for new challenges, time with my family and new opportunities to make a difference,” she said.
The president issued a statement praising Jackson.
“Under her leadership, the EPA has taken sensible and important steps to protect the air we breathe and the water we drink, including implementing the first national standard for harmful mercury pollution, taking important action to combat climate change under the Clean Air Act, and playing a key role in establishing historic fuel economy standards that will save the average American family thousands of dollars at the pump while also slashing carbon pollution,” Obama said.
It remains unclear how ambitious an agenda EPA will pursue in Obama’s second term, although environmental leaders have called on the president to limit greenhouse gas emissions from existing power plants. EPA will soon finalize the first carbon standard for new power utilities, but the White House has yet to decide whether to impose limits on existing facilities, according to several individuals who have been briefed on the matter but asked not to be identified because no final decision has been made.
The EPA has delayed making a contentious decision on whether to classify coal ash as a hazardous waste and is fighting in federal court to reinstate rules governing cross-state air pollution from coal plants in the eastern half of the United States.
http://www.washingtonpost.com/national/health-science/epa-head-jackson-to-resign-post/2012/12/27/50637f50-4fda-11e2-8b49-64675006147f_story.html?wpisrc=al_comboNP_p
Posted by theodore miraldi at 12:26 PM