Limits on Unions Pass in Michigan, Once a Mainstay 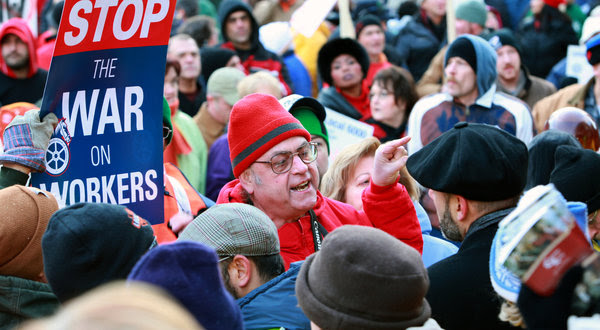 Fabrizio Costantini for The New York Times
Protesters argued on the steps of the Michigan Capitol on Tuesday as state lawmakers considered right to work legislation.
As thousands of incensed union members filled the Capitol rotunda and poured out onto its lawn chanting “shame, shame,” labor leaders and Democrats said they would immediately mount an intense, unceasing campaign to regain control of the state Legislature and governor’s office by 2015. But advocates of legislation, which outlaws requirements that workers pay fees to unions as a condition of employment, lauded the day as a historic turning point for economic health in Michigan, and some Republicans predicted their victory here would embolden other states to enact similar measures.
The measure, which Gov. Rick Snyder, a Republican, signed almost immediately, is the latest in series of setbacks to organized labor in states, like Indiana and Wisconsin, where it has traditionally been strong. National labor leaders predicted a backlash and said they were weighing options in the courts or future election campaigns.
“We are not going to end it today,” said Lee Saunders, the president of the American Federation of State, County and Municipal Employees. “We will be in the streets,” he said, adding later, “If we have to work it through 2014 and change the makeup of the legislatures, that’s what we’ll do.”
Some were talking about the potential of calling for some sort of ballot initiative, aimed at bringing the issue before voters as union supporters had successfully done in Ohio in 2011 after efforts to sharply limit collective bargaining there, though other recent history suggests such efforts can be difficult. In Wisconsin, an effort to recall the governor over his cuts to collective bargaining failed this year.
Though Republicans control the state Capitol, Mr. Snyder, a former businessman who had not held public office before his election in 2010, had regularly sidestepped the most divisive issues — including so-called right to work legislation — with talk of “relentless positive action.” This chapter came as a surprise to many here and seemed to open a new, wide gulf. Some lawmakers grew tearful, choked with emotion, as they argued over the matter on the House floor. Outside, exchanges between people turned tense, leaving some screaming curses at one another and jabbing fingers into the air.
By evening, two large canopies — that had belonged to supporters on opposite sides of the debate — lay crumpled on the Capitol lawn, the police said, and at least two people were arrested, said to have tried to press past one of the large clusters of state troopers that stood guard at the door to the George W. Romney building, which houses the governor’s office. And at least one police officer had used a substance similar to pepper spray during the protests.
“Today is a game changer for Michigan, for its workers, and for our future,” said Jase Bolger, the Republican House speaker, who had helped lead efforts to make Michigan the nation’s 24th state — and only the second one, along with Indiana, in the traditional Midwestern manufacturing belt — to ban requirements that workers pay fees for union representation.
The legislation here, which will go into effect next year, bans any requirement that most public- and private-sector employees at unionized workplaces be made to pay dues or other fees to unions. In the past, those who opted not to be union members were often required to pay fees to unions that bargained contracts for all employees at their workplace.
But the change means vastly different things depending on whom you talk to. Advocates say it is attractive to businesses looking to relocate companies and allows workers to make their own choices about unions. “This is the day when Michigan freed its workers,” Lisa Posthumus Lyons, a state House Republican, who said her family included union members, told colleagues during the intense debate on Tuesday which ended with votes along mostly party lines.
Next Page »
http://www.nytimes.com/2012/12/12/us/protesters-rally-over-michigan-union-limits-plan.html?nl=us&emc=edit_cn_20121211
Posted by theodore miraldi at 9:15 PM