In the continuing fiscal negotiations between President Obama and House Republicans, both sides have, from the very beginning, agreed on one point: Taxes on the middle class must not rise. But maybe it’s time to reconsider this premise. An unwavering commitment to keep middle-class taxes low could be one reason the political process has become so deeply dysfunctional. 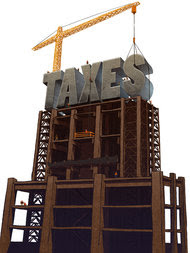 Let’s start with the problem: the budget deficit. Under current policy, the federal government is spending vastly more than it is collecting in tax revenue. And that will be true for the next several decades, thanks largely to the growth in entitlement spending that will occur automatically as the population ages and health care costs increase. As a result, the ratio of government debt to the nation’s gross domestic product is projected to rise, substantially and without an end in sight.
That can happen for a while, or even a long while, but not forever. At some point, investors at home and abroad will start questioning our ability to service our debts without creating steep inflation. It’s hard to say precisely when this shift in investor sentiment will occur, and even whether it will strike in this president’s term or the next, but when it does, it won’t be pretty. The United States will find itself at the brink of an unprecedented financial crisis.
Republicans and Democrats agree on the nature of the problem, but they embrace very different solutions. My fear is that both sides are engaged in an excess of wishful thinking, with a dash of mendacity.
If Republicans had their way, they would focus the entire solution on the spending side. They say that reform of the entitlement programs can reduce their cost. The so-called premium-support plan for Medicare, from Paul D. Ryan, the 2012 Republican vice-presidential candidate, would let older Americans use their health care dollars to buy insurance from competing private plans. (Interestingly, it’s similar to the system envisioned for the nonelderly by President Obama’s Affordable Care Act.) The hope is that competition and choice would keep health care costs down without sacrificing quality.
The premium-support model may well be better than the current Medicare system, but its supporters oversell what it would be likely to accomplish. The primary driver of increasing health care costs over time is new technology, which extends and improves the quality of life, but often at high cost. Unless the pace or nature of medical innovation changes, this trend is likely to continue, regardless of structural reforms we enact for Medicare.
Democrats, meanwhile, want to preserve the social safety net pretty much as is. They balk at any attempt to reduce this spending, including even modest changes like altering the price index used to calculate Social Security benefits. They focus their attention on raising taxes on the most financially successful Americans, contending that the rich are not paying their “fair share.”
Fairness, like beauty, is in the eye of the beholder. Unfortunately, people’s judgment is often based on anecdotes that distort rather than illuminate. The story of the undertaxed Warren Buffett and his overtaxed secretary looms larger in the public’s mind than it should.
Here are some facts, so you can judge for yourself:
In 2009, the most recent year for which data are available, the richest 1 percent of Americans paid 28.9 percent of their income in federal taxes, according to the Congressional Budget Office. (That includes income taxes, both individual and corporate, and payroll taxes.) Members of the middle class, defined as the middle fifth of households, paid 11.1 percent of their income in taxes.
Some of this difference in tax rates is attributable to temporary tax changes passed in response to the recent recession. But not all. In 2006, before the financial crisis, the top 1 percent paid 30 percent of their income in taxes, compared with 13.9 percent for the middle class.
These data suggest that the rich are not, as a general matter, shirking their responsibilities to support the federal government. To me, the current tax system looks plenty progressive. Others may disagree.
One point, however, cannot be disputed: Even if President Obama wins all the tax increases on the rich that he is asking for, the long-term fiscal picture will still look grim. Perhaps we can stabilize the situation for a few years just by taxing the rich, but as greater numbers of baby boomers retire and start collecting Social Security and Medicare, more will need to be done.
Which brings us back to the middle class. When President Obama talks about taxing the rich, he means the top 2 percent of Americans. John A. Boehner, the House speaker, talks about an even thinner slice. But the current and future fiscal imbalances are too large to exempt 98 percent or more of the public from being part of the solution.
Ultimately, unless we scale back entitlement programs far more than anyone in Washington is now seriously considering, we will have no choice but to increase taxes on a vast majority of Americans. This could involve higher tax rates or an elimination of popular deductions. Or it could mean an entirely new tax, such as a value-added tax or a carbon tax.
To be sure, the path ahead is not easy. No politician who wants to be re-elected is eager to entertain the possibility of higher taxes on the middle class. But fiscal negotiations might become a bit easier if everyone started by agreeing that the policies we choose must be constrained by the laws of arithmetic.
Posted by theodore miraldi at 11:50 AM