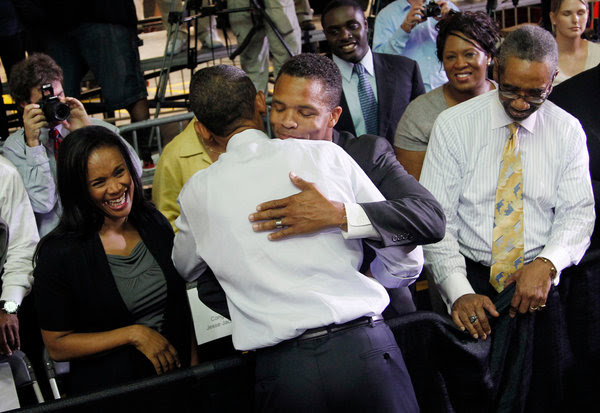 By JODI KANTOR and MONICA DAVEY

When Barack and Michelle Obama were married in Chicago two decades ago, Santita Jackson, a daughter of the Rev. Jesse L. Jackson, sang at their wedding. When Mr. Obama ran for his first national office, he made sure he was not stepping on the ambitions of her brother, Jesse L. Jackson Jr., who later became a co-chairman of his 2008 presidential campaign.

Now the younger Mr. Jackson, 47, who served 17 years as a congressman representing his hometown, is most likely headed to prison for campaign fraud, trailed by a string of problems from an extramarital affair to mental illness. Although the fates of Mr. Jackson and Mr. Obama could not be more different, their stories, and those of their families, are bound together. The rise of the current leading black political family in the United States is inextricable from the unraveling of an older one, with the two tangled in shifting alliances, sudden reversals of fortune and splits.

Decades ago in Chicago, Mr. Jackson was seen as a far more promising figure than his friend Mr. Obama — one the heir to a legend, the other an outsider seeking to surpass the father he barely knew. If Mr. Jackson had decided to run for the United States Senate in 2004, Mr. Obama most likely would not be president. That year and again in 2008, Mr. Obama, seeking to bolster his credibility with African-Americans, enlisted the younger Mr. Jackson for crucial help.
But along the way, the Jackson father and son helped define what the future president did not want to become: a black politician mired in the old urban-ethnic mold; a leader tainted by personal transgressions or a dysfunctional family. Mr. Obama, who saw the Jacksons’ problems up close, increasingly kept his distance from both men. Now, the Obama administration’s Department of Justice is poised to send the younger Mr. Jackson — who came under investigation after he pursued but failed to obtain Mr. Obama’s old Senate seat — to prison.
“The beginning of Jackson’s star being tarnished was the beginning of Obama’s star rising,” Eric Adelstein, a Chicago political consultant, said in an interview. “You can plot it on a chart: as Obama ascends, Jackson descends.”
Decades before Mrs. Obama worked on her husband’s presidential campaigns, she saw the process through the races of the elder Mr. Jackson. Her father, Fraser Robinson, was a city water worker and ward captain, but Ms. Jackson, the oldest daughter of the most important black politician in the country, was one of her closest friends.
“Michelle used to come to the house all the time,” Mr. Jackson recalled in an interview. (The White House declined to comment for this article.)
The man she eventually married was a stranger to Chicago, who had to pound the sidewalks of the South Side to collect signatures to run for a lowly State Senate seat in 1996. Mr. Obama would regularly attend weekly meetings of Mr. Jackson’s Rainbow/PUSH organization, and the Jacksons tried to be helpful with advice and opportunities — for example, giving him chances to “get his speaking legs,” said Hermene D. Hartman, publisher of an African-American newspaper, N’DIGO.
“I don’t think the Jacksons were threatened particularly,” said Don Rose, a longtime political consultant.
They had no reason to be. Jesse Jackson Jr. was already a sensation: at just 30, he had defeated more established politicians for a Congressional seat. His father proudly raised money and campaigned on his behalf, at one point distributing buttons that read “A new generation.” Some in Chicago saw strengths in Mr. Jackson that they had not seen in his father — crossover appeal to white voters, expertise in both politics and policy, an ability to move between the civil rights movement and elite institutions like St. Albans, his prestigious Washington school. Soon, People magazine named him sexiest politician.
“If I wanted to be an elected official, that’s not enough,” Mr. Jackson told The Chicago Tribune in 1995, speaking of the expectations he faced. The jobs he talked about pursuing were mayor of Chicago or speaker of the House, but his father and others went even further, Mr. Jackson noted: “One day, son, you may be president.”
It is not clear why he did not run in 2004 for a Senate seat that some thought could be his and gave Mr. Obama the go-ahead instead. Some say Mr. Jackson had set his sights on other offices; others say he did not think Mr. Obama, who had been trounced in a 2000 Congressional race, had a chance of winning.
Next Page »
http://www.nytimes.com/2013/02/25/us/politics/crossed-paths-chicagos-jacksons-and-obamas.html?nl=us&emc=edit_cn_20130225&_r=0

Posted by theodore miraldi at 7:48 PM