Chicago man killed because of the way he wore his hat 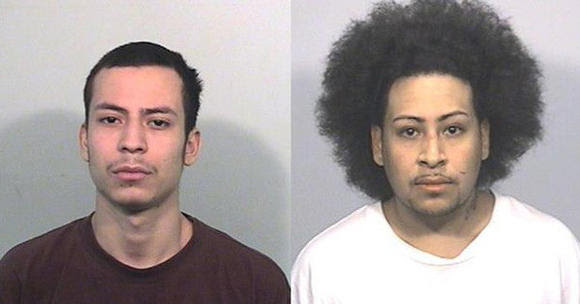 Jose M. Garcia, left, and Jose Rebollar-Verara. (Lake County Sheriff's Office photo)
By Ruth Fuller
Jose M. Garcia, 18, of the 600 block of Deepwoods, Mundelein, and Jose Rebollar-Verara, 24, of the 500 block of N. Carol Lane, Round Lake Park, thought that the tilt of Gabriel Gonzales’ hat indicated that he was a member of a rival gang, said Lake County Assistant State’s Atty. Ken LaRue.
Gonzales was leaving the One Stop Food and Liquor store, at 1015 Fairfield Road at about 12:45 a.m., when Garcia and Rebollar-Verara followed him outside and began flashing gang signs, LaRue said. Gonzales turned to run away and Garcia shot at him ten times, hitting him once in the back, LaRue said.
Gonzales took one step before he fell over and died, LaRue said. He was transported to Advocate Condell Medical Center in Libertyville, where he was pronounced dead at 1:52 a.m., according to a press release from Round Lake Beach Police.
Two witnesses provided information and identified Garcia and Rebollar-Verara, LaRue said. Police are searching for a third man who was with them, also flashing gang signs but remained on the curb, LaRue said.
There is no information that Gonzales was in a gang, LaRue said.
Garcia has 30 previous arrests as a juvenile and adult - including six convictions for domestic battery, LaRue said. Rebollar-Verara has eight previous arrests, including two weapons convictions, he said.
Both men are being held in the Lake County Jail on $3 million bond each. A crowd of about 25 people, including Gonzales’ tearful mother and girlfriend, were in attendance at today’s bond hearing, LaRue said.
http://www.chicagotribune.com/news/local/suburbs/grayslake_gurnee_round_lake/chi-round-lake-shooting-20130312,0,7515323.story
Posted by theodore miraldi at 11:54 AM