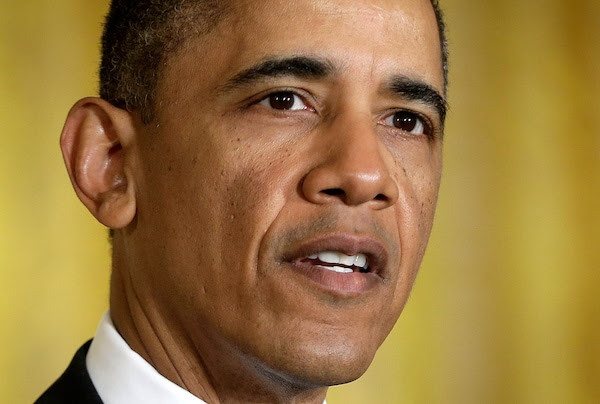 By Jon Cohen and Karen Tumulty

The afterglow of President Obama’s reelection and inauguration appears to have vanished as increasingly negative views among Americans about his stewardship of the economy have forced his public approval rating back down to the 50 percent mark, according to a new Washington Post-ABC News poll.
In December, just after he won a second term, Obama held an 18-percentage-point advantage over congressional Republicans on the question of whom the public trusted more to deal with the economy. Now, it’s a far more even split — 44 percent to 40 percent, with a slight edge for the president — but the share of those saying they have confidence in “neither” has ticked up into double digits. 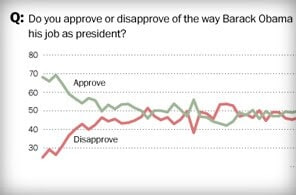 The poll contains ample evidence of the disillusionment voters feel toward both sides amid a sense of continuing dysfunction in Washington, which since December has been grappling with fiscal crises and deadlines of its own making.
Almost two weeks into the automatic across-the-board budget cuts known as the sequester, a slim majority of Americans dis­approve of the reductions. At the same time, nearly three-quarters say they are feeling no impact on their lives, and fewer than half expect a toll on their family finances if the cuts continue.
Still, large majorities expect that the sequester will eventually damage the economy, the military and the government’s ability to provide basic services. Most, 68 percent, say they would like the two sides to work together to come up with a deal to stop the cuts. The desire for cooperation is widely shared across party lines.
Asked who is responsible for the sequester, 47 percent say Republicans in Congress and 33 percent say Obama.
The poll suggests a closer divide on which side the public trusts in the battles over issues such as immigration and gun control — closer, perhaps, than the public’s policy preferences would indicate. Americans largely support the administration’s stand on new measures to curb gun violence, but on basic trust on the issue, the president and Republicans in Congress fare about evenly.
Obama’s overall job-approval rating stands at 50 percent, down five points from before he took the oath of office in January. Looking along partisan lines, the slippage since then has been particularly pronounced among political independents. Two months ago, independents tilted clearly in his direction, with 54 percent approving and 41 percent disapproving. Now, half of independents express a negative opinion of the president’s performance; just 44 percent approve.
The president has also seen an erosion in confidence among groups that he has counted as core supporters. Compared with a Post-ABC poll in December, the share of liberals who place their faith in Obama over Republicans when it comes to dealing with the economy is 14 points lower; there has been a 12-point slide among women.
At 50 percent, Obama’s overall standing in the poll is lower than that of most other modern second-term presidents at this point in their terms. Of the seven second-term presidents who have been in office since Harry S. Truman, only George W. Bush had a positive rating as low as 50 percent at this stage.