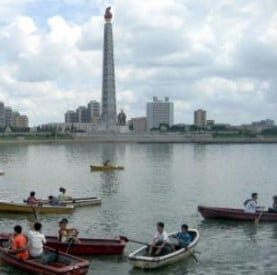 
Editor’s Note: The following report is excerpted from Joseph Farah’s G2 Bulletin, the premium online newsletter published by the founder of WND. Subscriptions are $99 a year or, for monthly trials, just $9.95 per month for credit card users, and provide instant access for the complete reports.
WASHINGTON – China may be appearing frustrated with North Korea’s latest brinksmanship and antics as a ploy to drive a wedge between the U.S. and its Asian friends in what some experts call the Washington-Seoul-Tokyo alliance, according to a report in Joseph Farah’s G2 Bulletin.
South Korea was impressed by China’s recent vote in the United Nations Security Council to approve increased sanctions on North Korea for its disregard of a ban forbidding more missile and nuclear weapons tests.
In effect, North Korea, as a member of the U.N., has snubbed demands by the permanent members of Security Council of China, Russia, the United States, Great Britain and France. Germany is a non-permanent member.
Experts say Washington’s relationship with Seoul and Tokyo is a critical element in its recent Asia-Pacific policy tilt.
All the countries one way or another have serious maritime disputes with Beijing, but experts say that Seoul appears to be closer to China than Japan is.
Indeed, there even are disputes in the Washington-Seoul-Tokyo alliance, particularly over the issue of wanting missiles and possibly to develop nuclear weapons, despite the decades of assurance Washington has given to both to include them under its nuclear umbrella. South Korea especially wants to begin a civilian nuclear program that could be used as a basis for fuel for a future nuclear weapons program.
That policy now appears to be coming under challenge as North Korea has threatened both countries with a nuclear attack. Pyongyang also has threatened the U.S. homeland with a pre-emptive nuclear attack.
Asian expert Sunny Seong-hyon Lee told Asia Times that Beijing senses a growing resentment from Seoul toward Washington over developing a civilian nuclear program.
“China also senses that the (South) Korea-U.S. alliance is facing challenges as Seoul tries to reposition itself in the global order in a manner commensurate with its rising global status,” Lee said. In relation to Washington, that means Seoul is “trying to find its own voice.”
China also has noticed Seoul’s questions about the credibility of the U.S. nuclear deterrence against a nuclear-armed North Korea, as well as differing expectations between them over what it would take for the U.S. to get involved in a conflict between North and South Korea.
“While U.S.-ROK (Republic of Korea) relations are at a historic high, the alliance is evolving in a time of geostrategic and economic shifts in the region,” Lee said. “Seoul feels that its alliance with Washington must overcome a ‘fairness’ issue.”
This refers to an issue in which Washington let Japan produce its own nuclear fuel but hasn’t allowed Seoul to do it.
Meantime, Beijing has given platitudes to newly elected South Korean President Park Geun-hye. She speaks Chinese and has what is described as an affinity for Chinese philosophy.
Park apparently has a direct line to Chinese President Xi Jinping. According to Lee, she wanted to discuss North Korea, and got through. Jinping’s predecessor, Hu Jintao, never had such a relationship with Park’s predecessor, Lee Myung-bak, suggesting a new approach by the newly selected Chinese president.
“Beijing’s charm offensive toward Park is meant to influence her early in her presidency as she fine-tunes her foreign policy,” Lee said.
Seoul wants China to go along with a South Korean-led form of reunification with the North. There are conflicting views, however, whether China is on board with a South Korean-type of reunification that includes democracy at its doorstep. Other analysts, however, believe it could pay off, but it will take some time.
Analysts believe Seoul also may be trying to woo China in an effort to send a message to Washington to come to terms on its long-outstanding issues.
Seoul’s pressure on Washington comes despite U.S. assurances that the country comes under the U.S. nuclear umbrella as well as the permanent positioning of some 28,500 troops, most of which would be in harm’s way should North Korea launch an artillery and missile barrage on Seoul, only 30 miles from the Demilitarized Zone. North Korea also has almost a million of its own troops opposite the U.S. troops, who one U.S. intelligence analyst told WND would be only a “speed bump” to a massive onslaught troop invasion from the North.
Beijing also may hope that Seoul decides against joining the Asian version of a U.S.-led missile defense system.
Keep in touch with the most important breaking news stories about critical developments around the globe with Joseph Farah’s G2 Bulletin, the premium, online intelligence news source edited and published by the founder of WND.

Posted by theodore miraldi at 9:10 AM