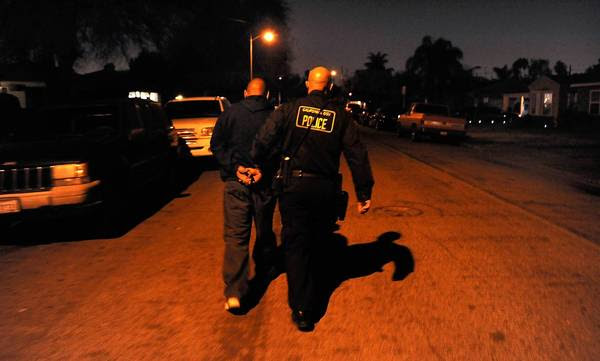 A man is escorted to a vehicle after being arrested by a Department of Justice law enforcement officer in Whittier on suspicion of illegally possessing a handgun. (Wally Skalij / Los Angeles Times / February 10, 2013)


SACRAMENTO — The state Assembly approved $24 million Thursday to speed up the confiscation of guns from Californians who are not allowed to own them because of criminal convictions or serious mental illness.
A day earlier, lawmakers rejected a plan to allow school districts to train teachers and administrators to use guns to protect campuses.
Legislators said the money they allocated would pay for 36 additional agents to capture 39,000 guns from people who bought them legally but were later disqualified because of a subsequent conviction or court order.
The new funds, according to Assemblyman Robert Blumenfield (D-Woodland Hills), will allow the state Department of Justice to clear its backlog, accumulated during budget cuts, in the next three years.
Thursday's action came after Congress rejected a package of gun-control measures.
"Congress' failure is our opportunity," Blumenfield said. The state measure is aimed at "keeping guns out of the hands of people clearly identified as folks who should not have guns in their possession."
Some Republican lawmakers opposed the funding measure, arguing that it was improper to pay for the confiscations using a surplus of fees paid by gun buyers to cover the cost of background checks.
"This fee is not for this purpose," said Assemblyman Brian Jones (R-Santee). "This bill will be tied up in court for years."
The measure, SB 140 by state Sen. Mark Leno (D-San Francisco), has passed the state Senate but heads back there for approval of some noncontroversial amendments.
On Wednesday, lawmakers killed a bill offered by Assemblyman Tim Donnelly (R-Twin Peaks) in response to the massacre at Sandy Hook Elementary School in Connecticut. Only one of the seven Assembly Education Committee members voted for the bill, AB 202.
Arming teachers could compromise student safety, said Assemblywoman Joan Buchanan (D-Alamo): "I wouldn't want my child in a classroom with a teacher who had a gun."
Donnelly said criminals would not know which teachers might have firearms, and his proposal would be a deterrent to campus violence.
"It would send a very clear signal to a would-be deranged killer," Donnelly said.
http://www.latimes.com/news/local/la-me-guns-california-20130419,0,4420858.story
Posted by theodore miraldi at 8:11 AM