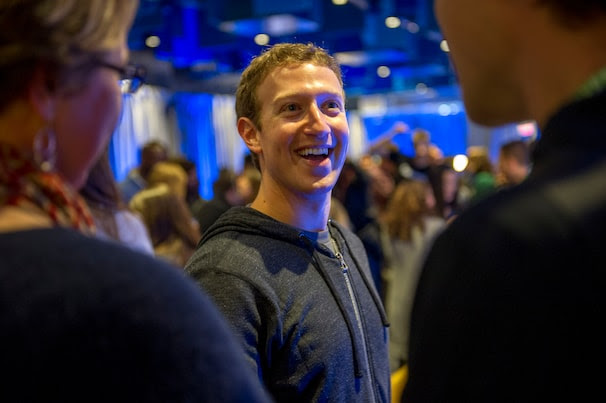 David Paul Morris/BLOOMBERG - Mark Zuckerberg, chief executive officer of Facebook, chats with attendees during an event in California on April 4, 2013. Zuckerberg unveiled a new organization last week with the goal of improving the country’s immigration policy.

Facebook founder Mark Zuckerberg generated international attention last week for his entry into Washington politics. In launching a new political group, he positioned himself as a leading advocate to help aspiring entrepreneurs and other ambitious immigrants achieve the American dream.

Yet behind the scenes on Capitol Hill, Facebook lobbyists were engaged in another form of politics: pressing to insert a few new words helpful to Facebook’s business interests into a sprawling legislative proposal.
Key provisions expected in immigration legislation See what is likely to be included in the bill.
More business news

Howard Schneider
Debt problems could prolong the region’s downturn and risk a return to more acute crisis, according to report.

On immigration, a step forward for start-ups

More business news
The deft maneuvering came during the drafting of the new bipartisan Senate immigration proposal being released this week. It underscores the rising clout of a young company that is following the road paved by such technology forebears as Microsoft and Google, moving from indifference toward Washington to persistent, sophisticated engagement.
The payoff on the immigration provision could be substantial, allowing Facebook and other technology companies to avoid a requirement that they make a “good-faith” effort to recruit Americans for jobs before hiring from overseas. Facebook could also sidestep proposed rules that would force it to pay much higher wages to many foreign workers.
The new measures are part of a compromise between the tech industry, which says it faces a shortage of qualified engineers and other high-skilled workers in the United States, and critics, including some labor unions, who say the H1B visa program has been abused by firms seeking cheaper labor to maximize profits. The new carve-out for Facebook and other firms, critics fear, could help companies evade the stricter proposed regulations being hailed by lawmakers as a way to crack down on ­abuses.
Facebook officials declined to comment on the specific H1B provision, instead couching the company’s lobbying on the issue as part of a broader push to improve the country’s economy. They said any new wage requirements would have “little or no impact” on Facebook because it pays engineers a “competitive wage that is well enough above the lowest level required by current law.”
“Modernizing the immigration system so it helps the U.S. economy and responsibly promotes innovation is a top priority for Facebook and all of our tech colleagues,” Jodi Seth, a Facebook spokeswoman, said by e-mail. “We are working with the Hill and others to explain how our businesses work and to make sure reforms don’t have unintended consequences that might undermine the purpose of the bill.”
Facebook faces stricter regulations because the company recently surpassed a key legal threshold and is now considered to be “dependent” on H1B visas. The U.S. government classifies companies as dependent when more than 15 percent of their workers hold H1Bs. Facebook said it is “just over” the 15 percent line.
The new H1B regulations in the Senate deal are aimed largely at big outsourcing firms — most of them based in India — that employ tens of thousands of new H1B workers each year. More severe limits would be placed on companies with more than half of their workers on the visas, including stiff fees and an outright ban to take effect in 2016 on these firms hiring additional H1B workers.
http://www.washingtonpost.com/business/economy/facebook-flexes-political-muscle-with-carve-out-in-immigration-bill/2013/04/16/138f718e-a5e7-11e2-8302-3c7e0ea97057_story.html
Posted by theodore miraldi at 9:39 AM