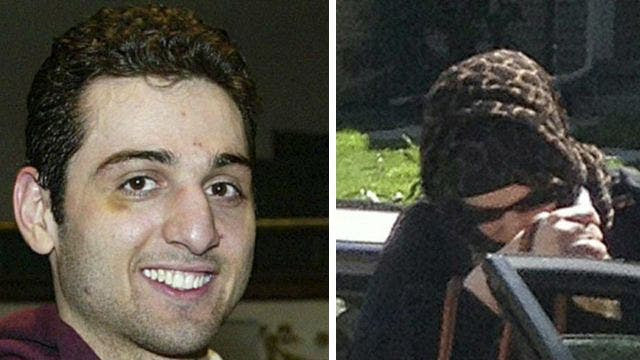 Homeland Security Secretary Janet Napolitano said Tuesday that the government's internal system "pinged" when Tamerlan Tsarnaev left the U.S. for Russia last year, in a statement that appeared to conflict with earlier suggestions that the trip went unnoticed.
The accounts of how closely the Boston bombing suspect, who was killed in a police shootout last week, was followed are sure to raise questions at a closed hearing set for this afternoon on Capitol Hill. The Senate Intelligence Committee has summoned the FBI to explain why that 2012 trip didn't raise alarm, considering the FBI had already looked into his background at the request of the Russian government.
Napolitano addressed the matter during a hearing on immigration legislation before the Senate Judiciary Committee. Napolitano said "the system pinged when he was leaving the United States" for Russia in early 2012. But she noted: "By the time he returned, all investigations -- the matter had been closed."
Sen. Lindsey Graham, R-S.C., challenged Napolitano, saying the FBI told him they had no knowledge of the trip. Graham had earlier claimed that the suspect's name was apparently misspelled when he traveled, so it never went into the system. Another lawmaker suggested he could have traveled under an alias.
It is possible, though, that Tsarnaev "pinged" in a system known as the TIDE database. This is a vast repository of more than 500,000 names that have come up throughout various investigations and elsewhere. The actual terror watchlists are subgroups of names from the TIDE database, but Tsarnaev apparently was not on one of those lists.
The FBI has come under scrutiny after having been alerted in 2011 by a foreign government -- said to be Russia -- about Tamerlan Tsarnaev's activities.
"The request stated that it was based on information that he was a follower of radical Islam and a strong believer, and that he had changed drastically since 2010 as he prepared to leave the United States for travel to the country's region to join unspecified underground groups," the FBI acknowledged.
But the bureau said the suspect was interviewed and no "terrorism activity" was found.