Talk radio: You got some 'splainin' to do! 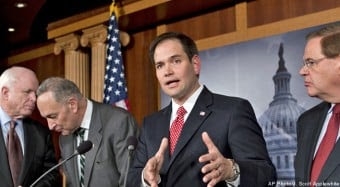 
WASHINGTON – In 2007, the Federation of Americans for Immigration Reform held a radio row event for talk show hosts to look at the idea of amnesty, and it didn’t happen under President Bush.
After Barack Obama became president, FAIR held another radio row event for talk show hosts, and when presidential spokesman Robert Gibbs said it was amnesty or nothing, the White House got nothing.

Now it’s happening again, with a couple of days of radio talk shows coming out of FAIR’s radio row in Washington, where the U.S. Senate’s “Gang of Eight” has been maneuvering for support for the members’ bill that includes … amnesty, according to a critic.
Organizers say the goal of the events in Washington is “informing the American people of the legislation they need to know about.”
FAIR President Bob Dane told WND, “We’re in a stage now of total political dishonesty.” And he said, “The big fix is in to pass a mass amnesty bill and the details are not of much interest to the big news networks.”
Therefore, he said, it is essential that the medium of talk radio be used “as an opportunity to get out and engage citizens who care passionately about this issue.”
He said, “They want to know why the Republican Party is abandoning the core principle that law is a cornerstone of citizenship.”
The senators – four from each political party and championed on the GOP side by party pop star Sen. Marco Rubio of Florida, introduced their plan this week, and found a buzz saw awaiting their efforts.
“I’ve never seen anything good come from a ‘gang,’” talk show host Phil Valentine told Politico.
Former U.S. Rep. Tom Tancredo, R-Colo., explains why the security of America’s borders is critical to the nation’s future, in “In Mortal Danger.”
“Rubio says it’s not amnesty because it doesn’t forgive anything, but that’s like saying if you rob a bank and you bring back a third of it, they’re gonna forgive you,” he said. “To me, anything short of E-Verify and cutting off the magnets doesn’t work.”
The magnets he dislikes are the offering of government benefits and jobs to illegal aliens.
“So you cut those off … they’ll deport themselves,” he said. “They’ll go where the jobs are. And if the jobs aren’t here, they’ll go back home.”
Bob Dane, the communications director of FAIR, described the two-day event as the “game changer” where the forces of pro-amnesty and anti-amnesty clash.
He said the strategy takes the discussion outside of the beltway in Washington to the American people to let them know such a plan is unacceptable.
According to a FAIR summary of the bill, it “creates three amnesty programs” – through the DREAM Act, through agricultural jobs and a blanket amnesty.
That’s called “registered provisional immigrant status” which would grant illegal aliens living in the United States before December 31, 2011, amnesty six months after the bill is enacted.
The bill runs 844 pages and was submitted at 2:30 a.m. on the morning of April 17.
The full text of the bill, called The Border Security, Economic Opportunity and Immigration Modernization Act of 2013, can be read online.
Among the talk show hosts, various congressional and political figures attending the event to speak with the hosts was former Congressman Tom Tancredo R-Colo., founder of Team America PAC and WND columnist.
He said he could not think of a “more timely moment for this event because of what has happened with the Gang of Eight.”
He said stopping the proposal is critical to the nation, because if the legislation succeeds, it will mark the completion of Barack Obama’s “mission to transform America.”
Tancredo warned there is a possibility it could pass the Senate, if it doesn’t get loaded up with amendments that make people mad. And he said he’s concerned it could pass the House, if Speaker John Boehner compromises with Democrats to pass a form of amnesty.
That, he said, would be the “absolute death knell” for the Republican Party and will lead to the emergence of a “strong third party” to challenge the GOP.
Tancredo, who ran as a third-party candidate for governor after retiring from the House, said he’s ready to go with that idea.
He explained that’s because if amnesty arrives, solidly GOP states like Texas and Arizona suddenly will be swing states.
Radio host Lars Larson of Portland, Oregon’s KXL told WND he’s for a simple solution: “Enforce the law.”
“If you’re illegally living in the United States, you shouldn’t be living and you shouldn’t be working here,” he said.
Larson said he’s been opposing amnesty for 17 years and he is appalled at the behavior of the Congress and the president.
Bob Vandervoort, executive director of Pro-English, told WND he was attending the FAIR events “to get the message out that we need to make English our official language and to encourage greater assimilation in this country.”
Pro-English describes itself as “the nation’s leading advocate of official English” and it has been instrumental in 31 states and countless cities and municipalities in securing English as the official language of the government.
Vandervoort said this topic is of critical importance because “one of the biggest problems we have is the push of multiculturalism and unless we can find things to bring us together, such as the English language, we’re going to be more divided than ever.”
He said the Senate plan lacks any requirements to participate in the English language.
According to a recent Rasmussen Poll he cited, 61 percent of Americans believe that English should be made the official language of America.
Vandervoort warned that if there are no requirements for learning English, America could one day mirror Canada as a bi-lingual nation, with a English speaking core and a regional bloc that speaks primarily Spanish.
Congressman Steve King, R-Iowa, has introduced H.R. 997, “The English Language Unity Act” in the House of Representatives, which, would “provide consistency among Americans by requiring all official functions of the United States to be conducted in English.”

Read more at http://www.wnd.com/2013/04/talk-radio-rips-dishonesty-behind-amnesty-plan/#Wjor7sLF1AxDFjWX.99
Posted by theodore miraldi at 5:04 PM