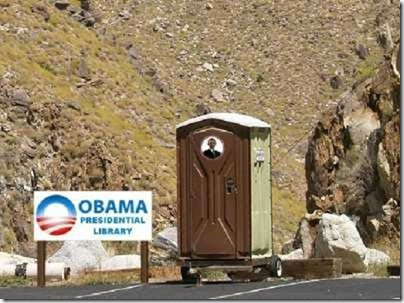 The George W. Bush Presidential Library is being dedicated and opened this week. This prompts a thought: what might the future Barack Obama Presidential Library look like?
Libraries dedicated to presidents are a combination of shrines, archives, monuments and sites meant to inspire. Wherever the site, it is never too soon to start the planning.
Here are some thoughts provided as a public service to my nation.
Presidential libraries usually have placards featuring memorable quotes from presidents. John Kennedy has "what can you do for your country" and many other quotes dreamt up by Ted Sorenson. Abraham Lincoln has the entire Gettysburg Address, "charity to all, malice towards none"; Franklin Roosevelt has "a date that will live in infamy"; "the only thing we have to fear is fear itself" and a slew of other ringing magisterial declarations.
And Barack Obama?
He rode a few cotton-candy words mainlined to Obama addicts in 2008 into the Oval Office: Hope, Change. Those two words will inflict visitors everywhere they stroll-despite the little-known fact that his own speechwriter cynically described these words, after Obama won, as so much fodder fed to the great unwashed. But since the library will clearly be immense -- as a testament to Obama's greatness -- there will be plenty of space for further quotes. Here are some that can be carved in stone in a way that befits a man we were told was sort of a God.

● "And it's not surprising then they get bitter, they cling to guns or religion or antipathy toward people who aren't like them or anti-immigrant sentiment or anti-trade sentiment as a way to explain their frustrations."
● "I'm not interested in suburbs. Suburbs bore me."
● "...so I know whose ass to kick" (regarding the Gulf oil spill)
● "I believe in American exceptionalism, just as I suspect that. the Brits believe in British exceptionalism and the Greeks believe in Greek exceptionalism."
● Americans have become "a little soft..." a little bit lazy..." "have lost our ambition, our imagination, and our willingness to do things that built the Golden Gate Bridge" before he became president.
● "Take off your bedroom slippers. Put on your marching shoes. Stop complaining. Stop grumblin'. Stop cryin'." (addressing a group of blacks decrying lack of support for their community.)
● The police "acted stupidly" and it is "just a fact'' that African-Americans and Latinos are disproportionately stopped by police (weighing in on the arrest of Harvard Professor Henry Louis Gates, Jr.)
● Elections are tight when you have a "funny name" like Barack Obama and don't "look like all those other presidents on dollar bills."
● "Typical white person."
● "They talk about me like a dog." (because, after all, Americans are inspired by self-pitying presidents).
● "I won"
● Republicans are "bomb throwers" and "hostage takers" who sip Slurpees while driving the economy into the ditch; they will "have to sit in the back of the bus". Republicans want to dig moats and fill them with alligators to kill Hispanics slipping across the border; they are "members of the Flat Earth Society."
● "No, no. I have been practicing... I bowled a 129. It's like -- it was like Special Olympics, or something." --making an offhand joke during an appearance on "The Tonight Show", March 19, 2009
● "Fat Cats" "I'm standing between you and the pitchforks."
● "I don't want to quell anger... what I want to do is channel anger."
● "You would think they'd be saying thank you" on Tea Party protesters who received tax cuts.
● "Companies like Solyndra are leading the way toward a brighter and more prosperous future."
● "You are the reason I ran for office." while addressing the Occupy Wall Street movement.
● To Latno voters: 'We're gonna punish our enemies and we're gonna reward our friends who stand with us on issues that are important to us.
And my all-time favorite -- so far:
● "Vote for Revenge"

One could go on in this vein but let's move onto to other sections of the Obama library.
There will be vast areas of empty space that normally would be allocated to showcase accomplishments that led to the presidency. There will be no shelves taken up with such things as college transcripts, the "lost" thesis from Columbia University, records from Obama's time as a state Senator (they also went "missing"; actually Obama has also said they were thrown out -- how convenient ); there will be scant records of legal writing from the man who was celebrated as the first black president of the Harvard Law Review and who went on to serve as a constitutional lecturer for years at the University of Chicago.
His work history at a Chicago law firm? Absent. Who were his clients, what work did he do (apparently not much, the founder of the firm said he spent much of his time with his feet up on his desk working on his autobiography while in his twenties; a book that was delivered late-like Obama's budgets). A record of voting present as a state senator speaks volumes -- or rather does not.
Think of the libraries dedicated to the following Presidents and the stories they tell of great people and a great nation: Lincoln, Reagan, JFK, FDR, Truman.
Then think of Obama's history or lack thereof.
Perhaps this can area can be called the "Great Void".
Finally, Barack Obama's promise of transparency is fulfilled.
Empty spaces can give an area a sepulchral feel -- as it does in the Rothko Chapel in Houston. They can inspire contemplation. Perhaps Americans can ponder how a man so lacking in any record of true accomplishment can ascend to the highest level in the land.
But some of this space can be put to use. The planners of the Obama library have options. Many people have seen the photo of the teenage Bill Clinton meeting President Kennedy. That was symbolic. However one may feel about Clinton he did pull himself up with his own bootstraps -- a story that resonates with Americans -- and his brush with Kennedy inspired him to work harder in school and then seek public office.
What picture of Obama's can symbolize his teenage years? How about this one -- the famous Choom photo from his pot smoking high school "club"?
Statues, photos, film clips are common features of Presidential libraries. Reagan's "tear down this wall" challenge, JFK's Inauguration speech, FDR's declaration of war. There are audios of interviews with legendary journalists.
Presumably, Obama's Presidential Library will have a statue of him with his typical lifted chin jutting upwards. There will be the ubiquitous Shepard Fairy "Hope and Change" posters. Photos of his meeting with other foreign leaders will be spread like so much wallpaper.
That is safe, predictable, boring, and sad.
Designers certainly have far more images they can work with that would give visitors a fuller appreciation of the Obama presidency. Why not take some risks for a man who came from nowhere and became president?
There can be statues on pediments of Barack Obama before a teleprompter, swinging a gold club, or a more action-oriented one of his frequent basketball games with NBA greats. Photos can show his history on the links, luxuriating on estates in Hawaii and Martha's Vineyard (while lecturing us about shared sacrifice), smiling and laughing while enjoying musical concerts in the East Room of the White House.
There will naturally be a photo of a pensive president in the Situation Room of the White House awaiting reports from the attack on Bin Laden. Why not offer some balance with a photo of the rapper Jay Z hanging out in the very same ultra-secret Situation Room?
Visitors should be allowed to hear those hard-hitting, penetrating Presidential interviews with The Pimp with a Limp or those with the enquiring journalists at "Entertainment Tonight."
Why worry about any Gotcha Questions from people who at one time may have been journalists or from people of the caliber of an Edward R. Murrow or Walter Cronkite when you can chat it up with Fake News comedian Jon Stewart or David Letterman?
Presidential libraries are panoramic portrayals of presidencies. What story might the Barack Obama library tell?
Well, how about this roundup regarding the one signal "accomplishment" associated with President Obama, namely ObamaCare? He said his health care law would not add one dime to the deficit. Instead, ObamaCare will add $6.2 trillion to the deficit Other aspects of his record to reflect upon include:
The slowest modern recovery of record boosted only by spending on the national credit card. More Americans are living in poverty than when Obama took office. A labor force so distraught that the labor participation rate has plummeted and families are being devastated by the consequences of long-term unemployment (family formation is being delayed, for example). The startling rise of disability in America due to people who are being encouraged to abuse the program by the Obama administration. More Americans than ever before are on food stamps.
The green energy mania that benefited so many of his cronies has cost taxpayers billions and can be symbolized by a Karma car-now available on the cheap from junkyards all over the country."
Sadly, none of these ideas will be considered by the creators of the Obama Presidential Library.
But they should.