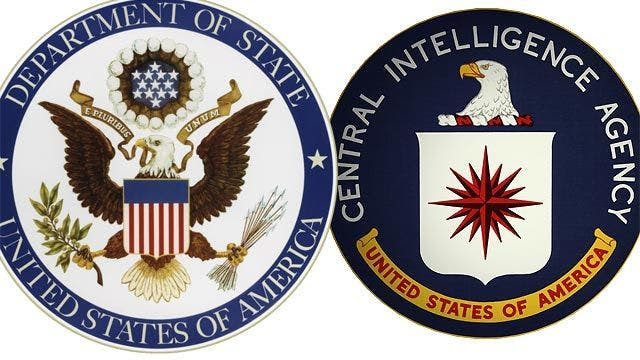 By James Rosen
At least four career officials at the State Department and the Central Intelligence Agency have retained lawyers or are in the process of doing so, as they prepare to provide sensitive information about the Benghazi attacks to Congress, Fox News has learned.
Victoria Toensing, a former Justice Department official and Republican counsel to the Senate Intelligence Committee, is now representing one of the State Department employees. She told Fox News her client and some of the others, who consider themselves whistle-blowers, have been threatened by unnamed Obama administration officials.
“I'm not talking generally, I'm talking specifically about Benghazi – that people have been threatened,” Toensing said in an interview Monday. “And not just the State Department. People have been threatened at the CIA.”
Toensing declined to name her client. She also refused to say whether the individual was on the ground in Benghazi on the night of Sept. 11, 2012, when terrorist attacks on two U.S. installations in the Libyan city killed four Americans, including U.S. Ambassador to Libya Chris Stevens.
However, Toensing disclosed that her client has pertinent information on all three time periods investigators consider relevant to the attacks: the months that led up to the attack, when pleas by the ambassador and his staff for enhanced security in Benghazi were mostly rejected by senior officers at the State Department; the eight-hour time frame in which the attacks unfolded, and the eight-day period that followed the attacks, when Obama administration officials incorrectly described them as the result of a spontaneous protest over a video.
“It's frightening, and they're doing some very despicable threats to people,” she said. “Not ‘we're going to kill you,’ or not ‘we're going to prosecute you tomorrow,’ but they're taking career people and making them well aware that their careers will be over [if they cooperate with congressional investigators].”
Federal law provides explicit protections for federal government employees who are identified as “whistle-blowers.” The laws aim to ensure these individuals will not face repercussions from their superiors, or from other quarters, in retaliation for their provision of information about corruption or other forms of wrongdoing to Congress, or to an agency’s inspector-general.
Rep. Darrell Issa, the Republican from California who chairs the House Oversight and Government Reform Committee, wrote to Secretary of State John Kerry on Friday to complain that the department has not provided a process by which attorneys like Toensing can receive the security clearances necessary for them to review classified documents and other key evidence.
“It is unavoidable that Department employees identifying themselves as witnesses in the Committee’s investigation will apply for a security clearance to allow their personal attorneys to handle sensitive or classified material,” Issa wrote. “The Department’s unwillingness to make the process for clearing an attorney more transparent appears to be an effort to interfere with the rights of employees to furnish information to Congress.”
The Obama administration maintains that it has been more than forthcoming on Benghazi and that it is time for the State Department to move on. At a recent hearing before the House Foreign Affairs Committee, Kerry noted that administration officials have testified at eight hearings on Benghazi, provided 20 briefings on the subject and turned over to Congress some 25,000 documents related to the killings.
“So if you have additional questions or you think there's some document that somehow you need, I'll work with you to try to get it and see if we can provide that to you,” Kerry told committee Chairman Rep. Ed Royce, R-Calif., on April 17. But Kerry added: “I do not want to spend the next year coming up here talking about Benghazi.”
Asked about Issa’s complaints about attorneys not receiving security clearances, State Department spokesman Patrick Ventrell on Monday indicated that – far from threatening anyone – the administration hasn’t been presented with any such cases. “I'm not aware of private counsel seeking security clearances or -- or anything to that regard,” Ventrell told reporters. “I'm not aware of whistle-blowers one way or another.”
Ventrell cited the work of the FBI – whose probe of the attacks continues almost eight months later and without any known instances of perpetrators being brought to justice – and the Accountability Review Board. The board was an internal State Department review panel led by former U.S. Ambassador to the United Nations Thomas Pickering and former Chairman of the Joint Chiefs of Staff Adm. Mike Mullen. An unclassified version of the board’s final report that was released to the public contained no conclusions that suggested administration officials had willfully endangered their colleagues in Benghazi or had misled the public or Congress.
“And that should be enough,” Ventrell said at Monday’s press briefing. “Congress has its own prerogatives, but we've had a very thorough, independent investigation, which we completed and [which was] transparent and shared. And there are many folks who are, in a political manner, trying to sort of use this for their own political means, or ends.”