Amid fears Iran about to cross so-called red line 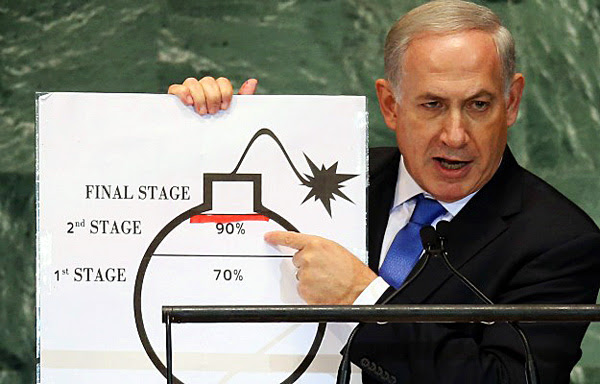 Israeli Prime Minister Benjamin Netanyahu draws a red line on the image of a bomb at the U.N. Sept. 27, 2012.

TEL AVIV – According to informed Middle Eastern security officials, U.S. Defense Secretary Chuck Hagel delivered a strongly worded message to Israel – do not attack Iran.
The officials told WND that Hagel informed the Israeli government the Obama administration will not accept any unilateral Israeli attack against Iran and that Israel must not strike Tehran without coordination with the U.S.
Hagel further told Israel that Prime Minister Benjamin Netanyahu cannot decide alone whether Iran has crossed the nuclear threshold, or the so-called Red Line previously outlined by the Israeli leader.
In a speech at the United Nations in September, Netanyahu drew a red line on a drawing of a bomb, depicting the point where he said Iran will have enough medium-enriched uranium to move rapidly toward building a nuclear bomb.
Netanyahu said at the U.N. that Iran could reach that point this spring or summer. By contrast, Obama has resisted setting any such deadlines.
Last week, Israel’s former military intelligence chief, Amos Yadlin, said, “If Iran continues to enrich uranium at its current rate, toward the end of the year it will cross the red line in a clear manner.”
The information comes after a former International Atomic Energy Agency senior nuclear inspector warned that Iran has discovered a way to circumvent Israel’s red line and that the red line may have already been passed.
Last fall, an IAEA report on Iran’s nuclear program showed a dip in the amount of 20 percent enriched uranium. Commenting on the report, the former deputy director-general for safeguards at the IAEA and senior nuclear inspector Olli Heinonen explained in a recent opinion article how this decrease is likely a gimmick.
He wrote that Iran has the capability to reconvert the uranium material back to the gas needed for its nuclear program. The converted 20 percent enriched uranium, now in a less worrisome oxide form, can “be converted back into centrifuge feedstock within a week.”
Heinonen warned that Iran may be able to convert the uranium without risk of detection.
If, through this process, Iran can disguise the quantity of enriched uranium it actually possesses, then Israel’s so-called red line may be artificial.
Heinonen further argued Iran has already passed Netanyahu’s red line of 250 kilograms of 20 percent enriched uranium, estimating Tehran possess as much as 280 kilograms, excluding any material that has already gone through the conversion process.

Posted by theodore miraldi at 6:15 PM