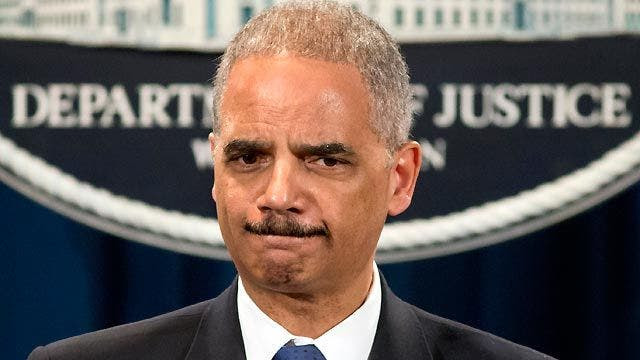 Fox News joined several other major media outlets Thursday in refusing to send a representative to a meeting with Attorney General Eric Holder on the department's surveillance of reporters if Holder continues to insist that the session be off the record.
Michael Clemente, Fox News' executive vice president, decided that Fox News will not attend the off-record talks. Fox News had been invited to a Friday session at the Department of Justice headquarters in Washington.
With the decision, the two news outlets known to have been targeted by the Justice Department for surveillance -- the other being the Associated Press -- are now declining to participate in the first phase of Holder's internal review over the controversy. Several other outlets are also refusing to attend.
Both the Associated Press and Fox News had their phone records pulled by the Justice Department, in the course of two separate leak investigations. The department went a step further in the Fox News case, seizing the personal emails of correspondent James Rosen, while accusing him of being a criminal "co-conspirator" in the application for the search warrant.
Holder, who agreed to conduct a review of DOJ guidelines over investigations that involve journalists, had set up meetings with members of the media for Thursday and Friday. He ran into immediate resistance, though, after calling for the meetings to be off the record, meaning the discussions would not be reportable.
AP media relations manager Erin Madigan White said that if the session is not on the record, the news cooperative will offer its views in an open letter on how Justice Department regulations should be updated.
If the AP's meeting with the attorney general is on the record, AP Executive Editor Kathleen Carroll will attend, White said. She said AP expects its attorneys to be included in any planned meetings between the attorney general's office and media lawyers on the legal specifics.
New York Times Executive Editor Jill Abramson said in a statement: "It isn't appropriate for us to attend an off the record meeting with the attorney general. Our Washington bureau is aggressively covering the department's handling of leak investigations at this time."
The Huffington Post also announced it would not attend the meeting at DOJ headquarters. CNN similarly said it would not attend an off-record meeting, but would agree to go if the attorney general made the session on the record. On Thursday afternoon, CBS News made the same call.
"CBS News does not plan to participate in the off-the-record meeting with Attorney General Eric Holder. We would be willing to consider an on-the-record discussion," CBS News spokeswoman Sonya McNair said.
Politico's editor-in-chief, John Harris, though, said on Thursday that he would attend. ABC News also announced that they would attend, but would press for the meeting to be held on the record.
The planned meetings are to take place over the coming weeks. The department said Holder plans to engage with news media organizations, including print media, wire services, radio, television, online media and news and trade associations. Discussions are to include news media executives and general counsels as well as government experts in intelligence and investigative agencies.
The meetings come as Holder faces intense scrutiny from lawmakers over his May 15 testimony in which he claimed to be unaware of any "potential prosecution" of the press, despite knowing about the investigation that targeted Fox News' James Rosen.
House Judiciary Committee Chairman Rep. Bob Goodlatte, R-Va., and Rep. James Sensenbrenner, Jr., R-Wis., voiced "great concern" in a letter to Holder on Wednesday, asking a number of questions about the department's dealings with the press, and alleging that the Fox News case "contradicts" his testimony at the hearing two weeks ago.
The committee confirmed earlier this week it was looking into Holder's testimony. Appearing before the House Judiciary Committee, Holder insisted that "the potential prosecution of the press for the disclosure of material" is not something he was involved in or knew about.
It emerged days later that the Justice Department obtained access to Rosen's emails -- after filing an affidavit that accused him of being a likely criminal "co-conspirator" in the leak of sensitive material regarding North Korea. Rosen was never charged, and never prosecuted. But he was effectively accused of violating the federal Espionage Act.
White House Press Secretary Jay Carney said on Wednesday that it appears Holder testified truthfully. He said President Obama "absolutely" has confidence in him.
Obama has asked Holder to report to him on any recommended policy changes on Justice Department investigations involving reporters by July 12.
The Associated Press contributed to this report.