Holder runs into roadblocks on off-the-record meetings on leaks 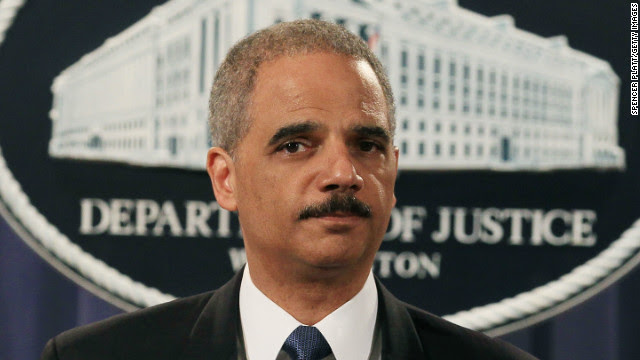 
Washington (CNN) - Attorney General Eric Holder's plans to sit down with media representatives to discuss guidelines for handling investigations into leaks to the news media have run into trouble.
The Associated Press issued a statement Wednesday objecting to plans for the meetings to be off the record. "If it is not on the record, AP will not attend and instead will offer our views on how the regulations should be updated in an open letter," said Erin Madigan White, the AP's media relations manager. The New York Times is taking the same position. "It isn't appropriate for us to attend an off-the-record meeting with the attorney general," executive editor Jill Abramson said in a statement.
Like the New York Times and the Associated Press, CNN will decline the invitation for an off-the-record meeting. A CNN spokesperson says if the meeting with the attorney general is on the record, CNN would plan to participate.
The Huffington Post's Washington bureau chief, Ryan Grim, also said he will not attend unless the meeting is on the record. "A conversation specifically about the freedom of the press should be an open one. We have a responsibility not to betray that," Grim told CNN.
But Politico posted an item on its website saying editor-in-chief John Harris plans to attend one of the meetings with Holder.
"As editor-in-chief, I routinely have off-the-record conversations with people who have questions or grievances about our coverage or our newsgathering practices," Harris said in the Politico item. "I feel anyone - whether an official or ordinary reader - should be able to have an unguarded conversation with someone in a position of accountability for a news organization when there is good reason."
MORE: DOJ says e-mails, letter prove it notified Fox of subpoenas
A Justice Department official said Wednesday the sessions would be off the record to encourage a full exchange of ideas.
President Barack Obama directed the attorney general to review guidelines for investigations involving leaks to the media and said Holder would be meeting with journalists to get their views.
This comes in the wake of disclosures that the government obtained AP phone records after the news organization reported classified details of a thwarted 2012 plot in Yemen to try to blow up a plane with a bomb. The government also obtained e-mails and phone records for a Fox journalist who allegedly received a classified report on North Korea from a former State Department contractor.
A Justice Department official said Holder would hold his first meetings with the media on Thursday and Friday.
Kerry must answer Benghazi questions, House GOP says
The official said the attorney general has a "longstanding belief that protecting and defending the First Amendment is essential to our democracy."
The official said the sessions would include print, television, radio, wire services and online media.
–Jesse Solomon, Jim Acosta and Kevin Bohn contributed to this report.
MORE: 5 things about the controversy surrounding AG Eric Holder
http://politicalticker.blogs.cnn.com/2013/05/29/holder-runs-into-roadblocks-on-off-the-record-meetings-on-leaks/
Posted by theodore miraldi at 11:00 AM