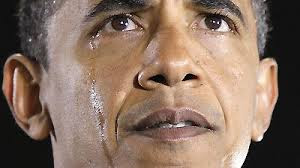 
President Obama will gain one more day of respite from the controversies that have crowded in on his administration Tuesday, as he tours the New Jersey coast to inspect the recovery and rebuilding efforts in the wake of Hurricane Sandy.
The Garden State visit follows a presidential speech Monday to mark Memorial Day at Arlington National Cemetery and a trip to tornado-stricken Oklahoma on Sunday.
Both weekend occasions permitted Obama to appear above the fray — the commander in chief and consoler in chief, respectively — rather than as a political figure pinned down in the Washington trenches.

The trip comes as his administration faces tough questions over a trio of controversies: the IRS political targeting scandal, the Justice Department’s leak probes and the handling of the Benghazi mission attack.
Tuesday’s New Jersey trip will be undertaken in the company of Gov. Chris Christie (R), a visit that will evoke memories of their joint tour of affected communities shortly after Sandy hit. At that point — late October last year — the presidential election campaign was in its closing days.
Some conservatives reacted with fury to Christie’s praise of Obama at the time, contending that any chance of GOP presidential nominee Mitt Romney riding a surge of late momentum was choked off by Sandy and its aftermath. Radio host Rush Limbaugh dismissed the New Jersey governor as “a fool.”
Last year’s Obama-Christie appearance was dramatic and high profile, but it is not unusual for the sharp edges of political partisanship to be softened in the wake of a disaster, as the president’s day in Oklahoma showed.
Two of the state’s most prominent Republicans, Gov. Mary Fallin and Rep. Tom Cole, accompanied Obama. Both expressed their admiration for the president’s actions in the days since a massive tornado ripped through Oklahoma City suburbs.
Late last year, Cole described Obama’s initial plan to avert the “fiscal cliff” of tax rises and spending cuts as “laughable” and “the most fraudulent position ever” in an interview with The Weekly Standard.
But after he and Fallin had seen Obama off on Air Force One for the trip back to Washington over the weekend, Cole told reporters gathered on the tarmac that the president had “made an awfully good impression on the people of Oklahoma.”
Obama, for his part, was able to make explicit what is often implicit in the role of a president, as he spoke next to the ruins of the Plaza Towers Elementary School in Moore, Okla., where seven children perished.
“I want to make sure everybody understands I’m speaking on behalf of the entire country,” he said. “I’m just a messenger here today, letting everybody here know that you are not alone, that you’ve got folks behind you.”
Obama’s Memorial Day address at Arlington also permitted the president to embrace the role of head of state rather than political player.
He even spoke of Washington itself in grander, more elevated terms than usual — especially for a man who often struggles to contain his contempt for the political culture of the nation’s capital.
“Beyond these quiet hills, across that special bridge, is a city of monuments dedicated to visionary leaders and singular moments in the life of our Republic,” Obama said. “But it is here, on this hallowed ground, where we choose to build a monument to a constant thread in the American character.”
Skeptics would note that fine words often bring little change. Obama has delivered well-received speeches at more intense moments of national trauma yet the basic political landscape has gone unaltered afterward. The two most notable examples came in the wake of the January 2011 shooting of then-Rep. Gabrielle Giffords (D-Ariz.) and after the massacre in Newtown last December.
The Memorial Day weekend did not bring a total cessation of political hostilities.
On Sunday, Sen. Rand Paul (R-Ky.) told ABC’s “This Week” that he believed the three controversies centered upon the IRS, Benghazi and DOJ meant that Obama was “really losing the moral authority to lead this nation.”
On “Fox News Sunday,” Sen. Lindsey Graham (R-S.C.) suggested that the IRS’s targeting of conservative groups had its roots in Obama’s own “take no prisoners attitude.”
The political arrows were not all being fired in one direction, either. Briefing the media aboard Air Force One on the way to Oklahoma, White House principal deputy press secretary Josh Earnest responded to a reporter’s question about what the disaster said about the role of government by first saying: "It’s not a day for politics.”
He then continued: “That said, I think it is evident to any impartial observer here what an important role the federal government can play in providing assistance to our people at their time of urgent need. And you talk about an agency like FEMA that, when this president took office, did not have a very good reputation.”
The jab at the president’s predecessor, George W. Bush, and the widely criticized response to 2005’s Hurricane Katrina was unmistakable.
Such moments fuel skepticism even among politically-unaligned observers.
“[Obama] can walk along what’s left of the boardwalk with Chris Christie, but if he then goes out the next day and starts jabbing Republicans in the House and the Senate, it doesn’t do anything to show he’s bipartisan or nonpartisan,” said Tobe Berkovitz, a Boston University professor who specializes in political communications.
Still, as he readies himself for Tuesday’s New Jersey trip, the president has plenty of reasons to savor another day’s break from politics as usual.