“When Malik Obama and Sarah Obama raised money in the United States as the respective heads of foundations claiming to be charities, not only did the Internal Revenue Service illegally grant one of them tax-deductible status retroactively, but these foundations have supported – to varying degrees – illegal operations that acquire funding for personal gain, philandering, polygamy and the promotion of Wahhabism, the brand of Islam practiced by Al-Qaeda.”

For the past two years, long before the current IRS scandals became public, WND has been reporting irregularities in two IRS-approved 501(c)3 organizations operated in the U.S. by Obama’s half-brother and step-grandmother in Kenya:
WND reported in September 2011 the Barack H. Obama Foundation apparently received IRS approval one month after an application was submitted in May 2011. The IRS determination letter June 11, 2011, granted a highly irregular retroactive tax-exempt approval only after the group came under fire for operating as a 501(c)3 foundation since 2008 without ever having applied to the IRS.
In October 2012, WND reported a separate foundation, the Mama Sarah Obama Foundation, created on behalf of Obama’s step-grandmother in Kenya, has transferred funds, 90 percent of which are raised from U.S. individuals and corporations, to send Kenyan students to the top three most radical Wahhabist madrassas in Saudi Arabia.
Since its founding in 2008, the Barack H. Obama Foundation, operating out of a commercial mail drop in Arlington, Va., has solicited tax-deductible contributions on the Internet, listing addresses and telephone numbers both in the U.S. and Kenya, without disclosing the group lacked an IRS determination letter.
In September 2011, the IRS confirmed to WND that the Barack H. Obama Foundation had received a determination letter in June 2011, awarding the group tax-exempt 501(c)3 status retro-actively to 2008
Tax-exempt polygamy?
On March 3, 2013, Andrew Malone, reporting for the London Daily Mail, documented that Malik’s youngest wife in Kenya, Sheila Anyano, 35 years his junior, had spent the past two years living with three of Malik’s other wives at the “Barack H Obama Foundation rest and relaxation center,” a restaurant complex that profits from visitors drawn by the family’s connection to the American president.
According to the Daily Mail, members of his extended family in Kenya have accused Malik, a practitioner of Islam and a polygamist, of being a wife-beater and philanderer. Malik is accused of seducing Sheila, the newest of his estimated 12 wives while she was a 17-year-old schoolgirl – a crime in Kenya where the legal age of consent is 18.
Malone tracked down Sheila’s mother, Mary, who explained to the reporter that Malik Obama had “secret trysts” with the girl after spotting her attending prayers at the mosque he has built in Kogelo, the family’s ancestral.
Sheila, now age 20, told Ambrose that marrying Malik, now age 55, was the “worst decision” of her life and confirmed that she and Malik kept their marriage “a secret” since she was 17.
“At first he was good, after he started speaking to me at the mosque,” Sheila told the Daily Mail. “But he has changed. Marrying him has been the biggest mistake of my life. He beats me, but mostly he’s just nasty and quarrelsome.”
Several sources report the “center” where Malik Obama houses his multiple wives is a “hotel” with a restaurant.
The Egyptian independent daily newspaper Al-Masry Al Youm, on Nov. 6, 2012, reported a meeting conducted in the only hotel in Kogelo, calling it the “Barack H. Obama Recreation and Rest Center.”
A Smithsonian Magazine article published in May 2011 distinguished the Barack H. Obama Recreation and Rest Center from then open and operating Kogelo Village Resort, a 40-bed hotel and conference center owned by Nicholas Rajula. The article noted Malik Obama, “the president’s half-brother and the oldest son of Barack Obama Sr., who had eight children with four wives,” had “invested a large sum in the soon-to-open Barack H. Obama Recreation Center and Rest Area in Nyag’oma Kugelo.”
On Jan. 18, 2013, the Christian Science Monitor noted Malik Obama was running for political office in Kenya. He lost running on a campaign slogan that played on his half-brother’s electoral success in the United States.
“Just as it is in the United States, I want it here,” he Malik told the Monitor.
The paper said he was speaking in his office in a recreation center he set up with the Barack H. Obama Foundation, described as “a charitable organization he founded to build houses for women and orphans.”
Shoebot charged that Malik Obama is abusing non-profit funds.
“There is no evidence to suggest that Malik is building any houses in Kogelo for widows and orphans as claimed,” Shoebat said.
Neither is there evidence that the Mama Sarah Foundation has built any homes for widows, orphans and HIV/AIDS victims.
“The only evidence where monies were spent involves the Barack H. Obama Recreation and Rest Center in Kenya, which housed Malik’s 12 wives in a facility that includes a restaurant and a mosque with a madrassa,” he said.
“While building mosques is legally considered charity, evidence shows the entire funding came directly from entities and individuals from Saudi Arabia, Qatar and Bahrain,” Shoebat said. “There is nothing of charitable nature to show for all the funds Malik raises from the United States. To date, there is no evidence for any accomplishments toward building homes for orphans, widows and AIDS victims in Kogelo or anywhere else in Kenya.”
Limited financial reporting
An IRS Form 990-EZ required for tax-exempt organizations was filed on May 23, 2011, only days before the IRS determination letter was sent. 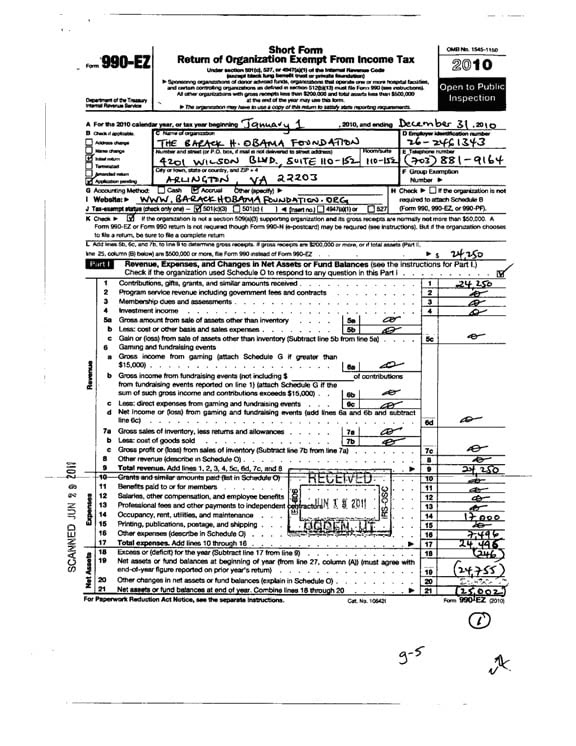 Barack H. Obama Foundation, Form 990-EZ, filed May 23, 2011, page 1
The Form 990-EZ appears to have been hand-written by Abongo Malik Obama himself, complete with an unorthodox page of calculations evidently included to back up the amounts entered into the form.
The Form 990 reported the foundation had received $24,250 total gross income for 2010, derived from contributions, gifts and grants.
“We were not very successful this year because of limited contributions,” Malik reported on the Form 990. “The Foundation sponsored a Youth Tournement (sic) and embarked on construction of community bridges.”
The Form 990 listed Samuel Andika Obiero of Arlington, Va., and Andrew Mboya of Hackensack, N.J., as directors, in addition to Abongo Malik Obama.
GuideStar.org, the private website that posts IRS documents of non-profit organizations, indicated that no audited financial statements were available for the Barack H. Obama Foundation.

Posted by theodore miraldi at 7:29 AM