Obama to Holder: Go probe yourself!

If this doesn't take stupid to a whole new level of human behavior, I don't know what does. Here's a corrupt president telling a corrupt attorney general to probe himself on the wire-tap scandals.
They must truly be below the Bell Curve when it come to intellect. Stupid is, as stupid does.
theodore miraldi 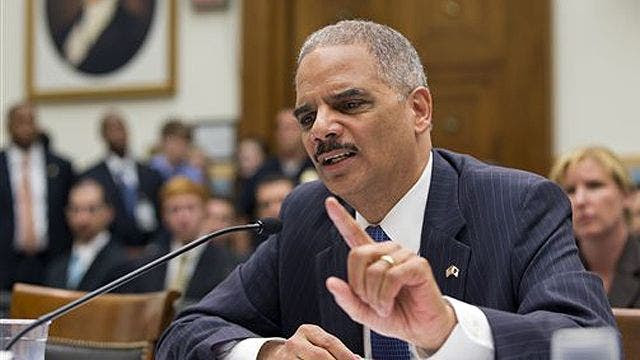 
President Obama, responding to mounting criticism of his Justice Department's seizure of reporter records, said for the first time Thursday that the administration would be reviewing its guidelines in response to the controversy. Obama said he's "troubled" by the developments and that journalists should not be "at legal risk" for doing their jobs.
Until now, administration officials have responded to the blowback by speaking generally about the importance of balancing national security -- and their ability to prosecute high-profile leaks -- with freedom of the press.
This explanation did not stem the criticism, which only built amid new revelations about the lengths to which prosecutors went to pursue leaks.
Not only did the department secretly obtain two months of phone records from the Associated Press, but it seized phone records from several Fox News lines -- and labeled one correspondent a criminal "co-conspirator" in its successful effort to seize his personal emails.
Obama, in a Washington address, said Attorney General Eric Holder has agreed to review the department's "guidelines governing investigations that involve reporters" and report back by July 12. He said Holder, who "shares" his concerns, will convene a group of media organizations to hear their concerns.
"As Commander-in Chief, I believe we must keep information secret that protects our operations and our people in the field. To do so, we must enforce consequences for those who break the law and breach their commitment to protect classified information," Obama said. "But a free press is also essential for our democracy. That's who we are, and I'm troubled by the possibility that leak investigations may chill the investigative journalism that holds government accountable.
"Journalists should not be at legal risk for doing their jobs. Our focus must be on those who break the law," he said.
He addressed the controversy in a speech otherwise focused on counterterrorism policy.
The information about the case involving Fox News only surfaced this week, though it pertained to documents from 2010 and 2011. At the time, federal prosecutors claimed Fox News correspondent James Rosen was a likely criminal "co-conspirator" as part of their case against an alleged leaker of sensitive material. They never charged Rosen, but used the claim to obtain access to his emails.
They also obtained phone records, including those for a number that matched the number of Rosen's parents.