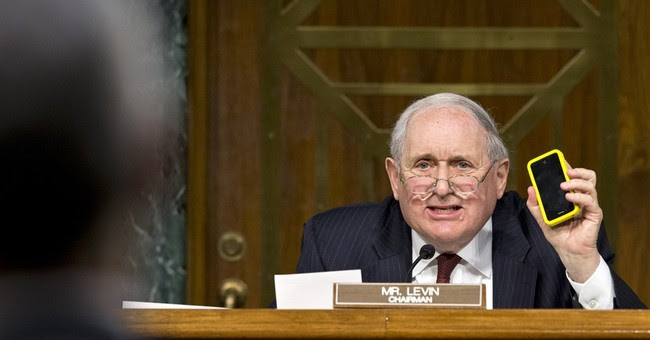 
We have truly entered the world of "Alice in Wonderland" when the CEO of a company that pays $16 million a day in taxes is hauled up before a Congressional subcommittee to be denounced on nationwide television for not paying more.
Apple CEO Tim Cook was denounced for contributing to "a worrisome federal deficit," according to Senator Carl Levin -- one of the big-spending liberals in Congress who has had a lot more to do with creating that deficit than any private citizen has.
Because of "gimmicks" used by businesses to reduce their taxes, Senator Levin said, "children across the country won't get early education from Head Start. Needy seniors will go without meals. Fighter jets sit idle on tarmacs because our military lacks the funding to keep pilots trained."
The federal government already has ample powers to punish people who have broken the tax laws. It does not need additional powers to bully people who haven't.
What is a tax "loophole"? It is a provision in the law that allows an individual or an organization to pay less taxes than they would be required to pay otherwise. Since Congress puts these provisions in the law, it is a little much when members of Congress denounce people who use those provisions to reduce their taxes.
If such provisions are bad, then members of Congress should blame themselves and repeal the provisions. Yet words like "gimmicks" and "loopholes" suggest that people are doing something wrong when they don't pay any more taxes than the law requires.
Are people who are buying a home, who deduct the interest they pay on their mortgages when filing their tax returns, using a "gimmick" or a "loophole"? Or are only other people's deductions to be depicted as somehow wrong, while our own are OK?
Supreme Court Justice Oliver Wendell Holmes pointed out long ago that "the very meaning of a line in the law is that you intentionally may go as close to it as you can if you do not pass it."
If the line in tax laws was drawn in the wrong place, Congress can always draw it somewhere else. But, if you buy the argument used by people like Senator Levin, then a state trooper can pull you over on a highway for driving 64 miles per hour in a 65 mile per hour zone, because you are driving too close to the line.
The real danger to us all is when government not only exercises the powers that we have voted to give it, but exercises additional powers that we have never voted to give it. That is when "public servants" become public masters. That is when government itself has stepped over the line.
View Full Article
http://townhall.com/columnists/thomassowell/2013/05/28/the-bullying-pulpit-n1607149?utm_source=thdaily&utm_medium=email&utm_campaign=nl
Posted by theodore miraldi at 9:15 AM