The stubbornness of Barack Obama

Why it’s always worked for him, and why it might not now.

By Chris Cillizza and Sean Sullivan


President Obama and his senior advisers are convinced that they are usually right and that Washington conventional wisdom — as voiced by members of Congress, reporters and the various political professionals in both parties — is usually wrong.
And for good reason. 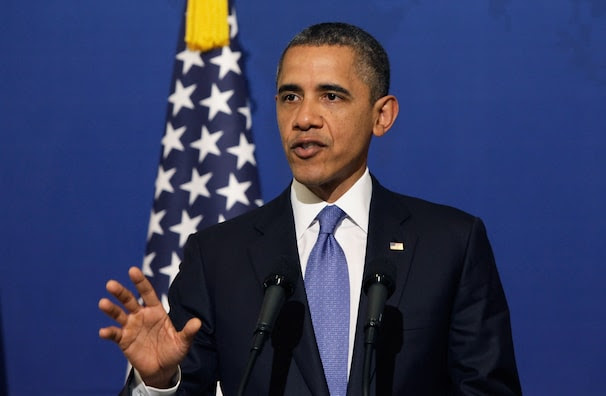 President Obama, not looking particularly stubborn. (Chung Sung-Jun/Getty Images)
When the political class said Obama wasn’t moving up fast enough in national polls in 2007, he and his team stubbornly stuck to its singular focus on Iowa. He/they were right.
When the economy sputtered and the political class said that a sluggish recovery would cost Obama a second term, the incumbent stubbornly stuck to the belief that the economy would start to get better and that the election wasn’t all about the economy anyway. He was right.
Go all the way back to Obama’s decision to run for the Senate in 2004, a too-soon move by a candidate considered the third or fourth most likely to wind up as the nominee, according to the political class. Obama stubbornly kept plugging away in the race, watched the top contenders implode and soared to the nomination. He was right.
On countless other occasions, both large and small, Obama and his inner circle have purposely ignored the chattering class, and nine times out of 10 they have been right.
Stubbornness in the defense of being right is no vice, Obama could rightly note looking back on his political career and most of his time in the White House.
And yet, Obama’s stubbornness regarding the ongoing controversy surrounding the Department of Justice and, in particular, Attorney General Eric Holder may not be his best strategy.
Through White House spokespeople, Obama has reiterated his confidence in Holder in the wake of the AG’s acknowledgment of his involvement in the investigation of Fox News Channel reporter James Rosen and Obama has rejected the idea of appointing a special counsel to investigate the IRS’ targeting of conservative groups despite the fact that 76 percent of Americans favor just such a move.
The mentality is simple: We are not going to cave to what political Washington demands because political Washington is often (always?) wrong.
True enough. But, there is one critical difference between all of the episodes we cited above of stubbornness working and the ongoing DOJ outcry: Those all happened to Barack Obama the candidate or the first-term president, not Barack Obama the second-term president.
For Obama, a second term means that his mind (and those of his advisers) turns not to how to win again — not possible — but rather to how he will be remembered by history. For everyone not named Obama in elected office — including, and maybe especially, his own party — Obama in a second term is someone who need not be followed in lockstep for fear of political retribution.
Those twin realities change the political equation for Obama. Whether or not he thinks the accusations against Holder are fair (he almost certainly doesn’t), he has to realize that a prolonged series of Congressional investigations centered on the IRS and the administration’s prosecution of leakers isn’t good news for his second-term agenda. And, Obama also has to realize that it is good politics for many people in his own party to break with him on such a high-profile series of issues. (Seven Democratic Senate seats up in 2014 are in states Mitt Romney won in 2012.)
The simplest solution then would be to jettison Holder — if not now then at some point in the not-too-distant future. While such a move surely wouldn’t placate some of the administration’s most vocal conservative critics, it would serve to take much of the air out of the balloon for a national audience and, in so doing, allow Obama to move on to other matters.
Short of that, Obama could aquiesce to calls for a special prosecutor to look into the IRS wrongdoing, a move that would both get him on the right side of public opinion on the matter and rob Republicans of the chance to continually bash him for allegedly side-stepping real action on the issue.
Obama certainly seems to have no plans to get rid of Holder. And, he is holding his ground on a special prosecutor. But what if his long-successful stubbornness strategy is a poor fit for his current circumstances?
DCCC hits six House Republicans on student loans: The Democratic Congressional Campaign Committee will launch ads in six college newspapers that single out Republicans on the issue of student loan rates. The ad news comes as Obama on Friday will warn against letting student loan rates double in July. House Republicans have passed their own plan to address the matter, but Democrats don’t approve of it.
The DCCC ads will target Reps. John Kline (R-Minn.), Gary Miller (R-Calif.),  Jaime Herrera Beutler (R-Wash.), Steve Southerland (R-Fla.), Rodney Davis (R-Ill.), and Joe Heck (R-Nev.).
Fixbits:
The FBI intercepted a letter addressed to Obama that may contain ricin.
House investigators reportedly intend to interview four IRS employees from the agency’s Cincinnati office.
“Moderate Republicans slowly were taken out of the party,” said newly minted Democrat Lincoln Chafee, the governor of Rhode Island.
Mitt Romney said the first 100 days of Obama’s second term lacked a clear agenda.
The fired former campaign manager to New Mexico Gov. Susana Martinez (R) was indicted on charges stemming from intercepting e-mails from Martinez and her staff.
On June 7, Rep. John D. Dingell (D-Mich.) will have served in Congress for 57 years, five months and 26 days, breaking the record of the late Sen. Robert C. Byrd (D-W. Va.).
Clay Schroers will manage Hawaii Democratic Sen. Brian Schatz’s 2014 campaign.
Get ready for a new political satire TV show.
http://www.washingtonpost.com/blogs/the-fix/wp/2013/05/31/the-stubbornness-of-barack-obama-why-its-always-worked-for-him-and-why-it-might-not-now/
Posted by theodore miraldi at 11:42 AM