Caught in a public relations crisis, the administration has released internal emails and details of closed-door discussions. But the sharing has still been selective. 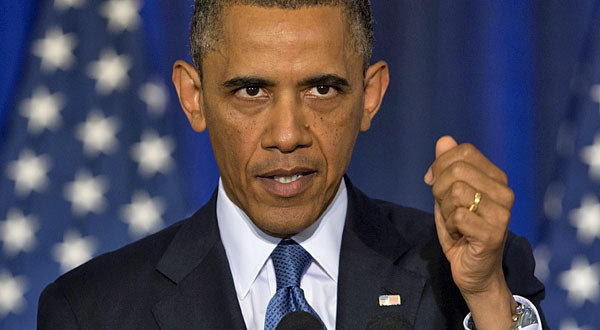 The Obama administration is caught in a public relations crisis, sharing too little and too late after a promise to be the most open presidency in American history. (Carolyn Kaster / Associated Press / May 23, 2013)


WASHINGTON — The White House decided to release internal emails about the deadly attack on the diplomatic compound in Benghazi, Libya — but only after summaries of the exchanges had leaked.
The president's spokesman disclosed details of closed-door discussions about a report that found the IRS targeted conservative groups — but did so in a drip-drip-drip fashion that only raised more questions.
And in a speech meant to expose the top-secret drone program to public examination, President Obama shrouded key details, such as whether the CIA would still use drones.
PHOTOS: President Obama's scandal-filled week
Caught up in a public relations crisis, White House officials have drawn open a few curtains, revealing once-secret documents and answering queries that they would ordinarily have dismissed with an eye roll.
But the sharing has been selective and done under duress. It has come in fits and starts to an administration that promised to be the most open in American history.
Many allies of the president think that with this burst of sunshine he has arrested the run of bad news and taken charge of the "narrative." Even in some Obama-friendly quarters, though, the sharing is seen as too little and too late, and all the more disappointing for the high hopes Obama had set for transparency at the outset of his presidency.
Civil liberties advocates are disappointed that Obama's drone speech glossed over some of the more difficult legal and moral aspects of targeted killings. The chairman of the Senate Finance Committee, a Democrat, questioned the candor of former officials at the Internal Revenue Service.
Lanny Davis, who handled scandals for the Clinton White House, has been critical of the Obama administration.
"The nontransparency instinct of the Obama White House is more about not understanding effective, proactive crisis management," said Davis, who remains an Obama supporter. "The idea is to inoculate by being transparent."
President Clinton survived scandals with the help of advisors known for strategically leaking information that was damaging. One tactic was a document "dump" delivered Friday evening in the hope the story would be old news by Monday.
"You help write bad stories," Davis said. "That's counterintuitive. But you know this stuff is coming out, so it's to your advantage to get it all out quickly, all completely, and make sure it's over and done."
Obama set out to do more than just play defense against scandal. Right after taking office, he sent a memo to federal agencies and promised an "unprecedented level of openness in government." His was the first modern administration to release White House visitor logs.
Before long, though, advocates for open government began to complain that the administration was resisting public records requests and going after whistle-blowers and leakers with vigor.
Then news broke that the Department of Justice had subpoenaed phone records of the Associated Press and emails of a Fox News journalist in pursuit of government leakers. The media peppered the White House with questions about its commitment to the 1st Amendment.
Obama aides went to work to allay concerns. They called in veterans of past administrations and campaigns to ask for advice. Democratic strategists say they talked about candor.
Tad Devine, senior advisor to former Democratic presidential nominees Al Gore and John F. Kerry, thinks the Obama team is embracing the idea. "They understand that by putting out a lot of information they reduce the risk that the Republicans can convince people and the press that they are hiding something," Devine said. "They also understand that time is their enemy in dealing with issues of this nature."
White House Press Secretary Jay Carney has recently entertained a much wider variety of questions, disclosing names of senior staffers involved in internal meetings and even talking about a conversation he had with Obama about media freedoms. He usually declines to "read out" such events.
Still, administration officials let their account of the IRS troubles evolve — particularly regarding the question of when the White House learned the agency was inappropriately targeting groups that sought tax-exempt status by singling out those with the words "tea party" or "patriots" in their applications.
The White House has struggled to "give accurate information on a timely basis," said Martha Joynt Kumar, a political science professor at Towson University who studies the White House and its relationship with media.
"In this case, you can see they've been slow to gather the facts, and it has damaged them," Kumar said. "It has kept the story rolling and makes it appears as though they're not on top of it."
With his administration's transparency under fire, Obama departed from his focus on drones in his speech last week to address it. He said he was troubled that leak investigations could chill the investigative journalism that holds government accountable.
But he also argued that openness isn't always the most important value — that sometimes the nation's security is at stake. The challenge, he said, is in "striking the right balance."
http://www.latimes.com/news/nationworld/nation/la-na-obama-transparency-20130526,0,947466.story
Posted by theodore miraldi at 8:33 AM