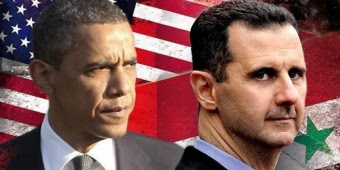 Editor’s Note: The following report is excerpted from Joseph Farah’s G2 Bulletin,
the premium online newsletter published by the founder of WND.

DAMASCUS, Syria – Against a backdrop of increasing dismay on the part of the Syrian opposition, Washington appears to be showing signs in discussions with the Russians that it could accept peace talks over Syria while embattled Syrian President Bashar al-Assad remains in power, according to a report in Joseph Farah’s G2 Bulletin.
This development has emerged as the U.S. Ambassador to Lebanon, Maura Connelly, was giving a lecture to the Association of Banks in Lebanon on how to avoid violating international and U.S. unilateral sanctions on Syria and Iran.
“It is not strange for the Americans to sell us out,” said a former French diplomat. “They are used to this,” referring to a possible shift in the U.S. position.
“If Bashar al-Assad wanted to invent an opposition that suits him,” the former diplomat said, “he would not find a better opposition than the one fighting him now.
“Through its fragmentation, and with its handing over the keys of the conflict to the jihadists of al-Qaida and al-Nusra Front, this opposition frustrated all the hopes that were pinned on it,” he said.
“And even if Israel prayed on the Wailing Wall for 20 centuries,” he added, “it would not get a better result than what it is now seeing in Syria, where the fighting has destroyed the structures of the state, exhausted the army, and entrenched sectarian strife.”
Germany, Belgium and Italy already are pursuing “under-the-table” contacts with Damascus.
They oppose the logic of arming the opposition, unlike France and Great Britain, which want the United Nations to rescind the arms embargo to the opposition and allow them to provide the weapons – something that amounts to more of an economic imperative than one out of conviction at this point.
In France, there is growing opposition to the French-Qatari alliance. The French people reportedly are suspicious of Doha’s role in financing extremists in Africa, Libya and Syria.
Damascus apparently had submitted to the United Nations a list of “terrorists” and “dangerous extremists” from 28 Arab and non-Arab countries, causing increasing concern in European capitals, which also are concerned about potential terrorist attacks.
Many of the submitted names already are on U.S. and European terror lists, according to sources.
The Syrian opposition believes that Washington now is attempting to make some kind of deal with Moscow, which they find troubling, these sources say.
They said that while the rhetoric against al-Assad will continue in public, under-the-table discussions will continue to allow him to remain in power at least until the end of his term in June 2014.
Even then, sources tell WND, al-Assad may seek reelection, and possibly could win, given the way politics in Syria go.
There also are rumors here that some American diplomats might have received large amounts of money from the Gulf Arab countries to continue pursuing al-Assad’s removal. However, WND could not confirm these rumors.
These sources say that any Washington-Moscow discussion on Syria has been moved to mid-June to give the Obama administration time to initiate what amounts to a public relations campaign to convince the American public on its shift in position toward seeking some kind of settlement with al-Assad.

Posted by theodore miraldi at 8:14 AM