17 Reasons the $17 Trillion Debt Is Still a Big Deal 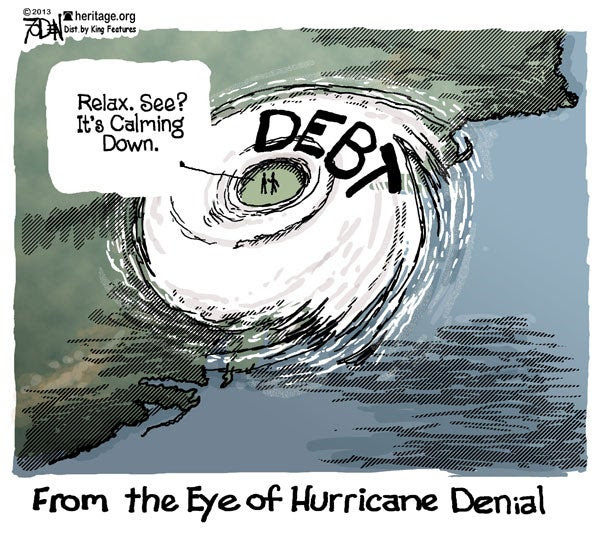 
Remember the debt? That $17 trillion problem? Some in Washington seem to think it’s gone away.
The Washington Post reported that “the national debt is no longer growing out of control.” Lawmakers and liberal inside-the-Beltway organizations are floating the notion that it’s not a high priority any more.
We beg to differ, so we came up with 17 reasons that $17 trillion in debt is still a big, bad deal.
1. $53,769 – Your share of the national debt.
As Washington continues to spend more than it can afford, every American will be on the hook for this massive debt burden. 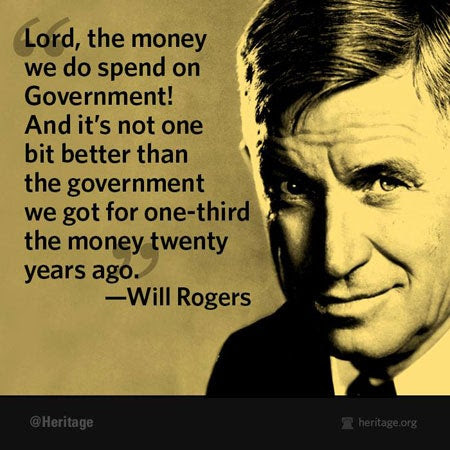 SHARE this graphic.
2. Personal income will be lower.
The skyrocketing debt could cause families to lose up to $11,000 on their income every year. That’s enough to send the kids to a state college or move to a nicer neighborhood.
3. Fewer jobs and lower salaries.
High government spending with no accountability eliminates opportunities for career advancement, paralyzes job creation, and lowers wages and salaries.
4. Higher interest rates.
Some families and businesses won’t be able to borrow money because of high interest rates on mortgages, car loans, and more – the dream of starting a business could be out of reach.
5. High debt and high spending won’t help the economy.
Journalists should check with both sides before committing pen to paper, especially those at respectable outlets like The Washington Post and The New York Times. A $17 trillion debt only hurts the economy.
6. What economic growth?
High-debt economies similar to America’s current state grew by one-third less  than their low-debt counterparts.
7. Eventually, someone has to pay the nation’s $17 trillion credit card bill, and Washington has nominated your family.
It’s wildly irresponsible to never reduce expenses, yet Washington continues to spend, refusing to acknowledge the repercussions.
>>>Watch this video to see how scary $17 trillion really is for your family.
8. Jeopardizes the stability of Medicare, Social Security, and Medicaid.
Millions of people depend on Medicare, Medicaid, and Social Security, but these programs are also the main drivers of the growing debt. Congress has yet to take the steps needed to make these programs affordable and sustainable to preserve benefits for those who need them the most.
9. Washington collects a lot, and then spends a ton. Where are your tax dollars going?
In 2012, Washington collected $2.4 trillion in taxes—more than $20,000 per household. But it wasn’t enough for Washington’s spending habits. The federal government actually spent $3.5 trillion.
>>> Reality check: See where your tax dollars really went.
10. Young people face a diminished future.
College students from all over the country got together in February at a “Millennial Meetup” to talk about how the national debt impacts their generation.
>>>Shorter version: They’re not happy. Watch now.
11. Without cutting spending and reducing the debt, big-government corruption and special interests only get bigger.
The national debt is an uphill battle in a city where politicians too often refuse to relinquish power, to the detriment of America.
12. Harmful effects are permanent.
Astronomical debt lowers incomes and well-being permanently, not just temporarily. A one-time major increase in government debt is typically a permanent addition, and the dragging effects on the economy are long-lasting.
13. The biggest threat to U.S. security.
Even President Obama’s former Chairman of the Joint Chiefs of Staff thinks so: 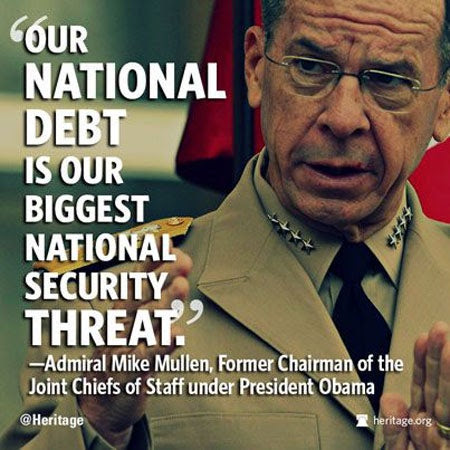 SHARE this graphic.
14. Makes us more vulnerable to the next economic crisis.
According to the Congressional Budget Office’s 2012 Long-Term Budget Outlook, “growing federal debt also would increase the probability of a sudden fiscal crisis.”
15. Washington racked up $300 billion in more debt in less than four months.
Our nation is on a dangerous fiscal course, and it’s time for lawmakers to steer us out of the coming debt storm.
16. High debt makes America weaker.
Even Britain’s Liam Fox warns America: Fix the debt problem now, or suffer the consequences of less power on the world stage.
17. High debt crowds out the valuable functions of government.
By disregarding the limits on government in the Constitution, Congress thwarts the foundation of our freedoms.
http://blog.heritage.org/2013/06/17/morning-bell-17-reasons-the-17-trillion-debt-is-still-a-big-deal/?utm_source=heritagefoundation&utm_medium=email&utm_campaign=saturday&utm_content=130622newtemplate
Posted by theodore miraldi at 4:42 PM