‘Door of No Return,’ a disputed memorial to the slave trade 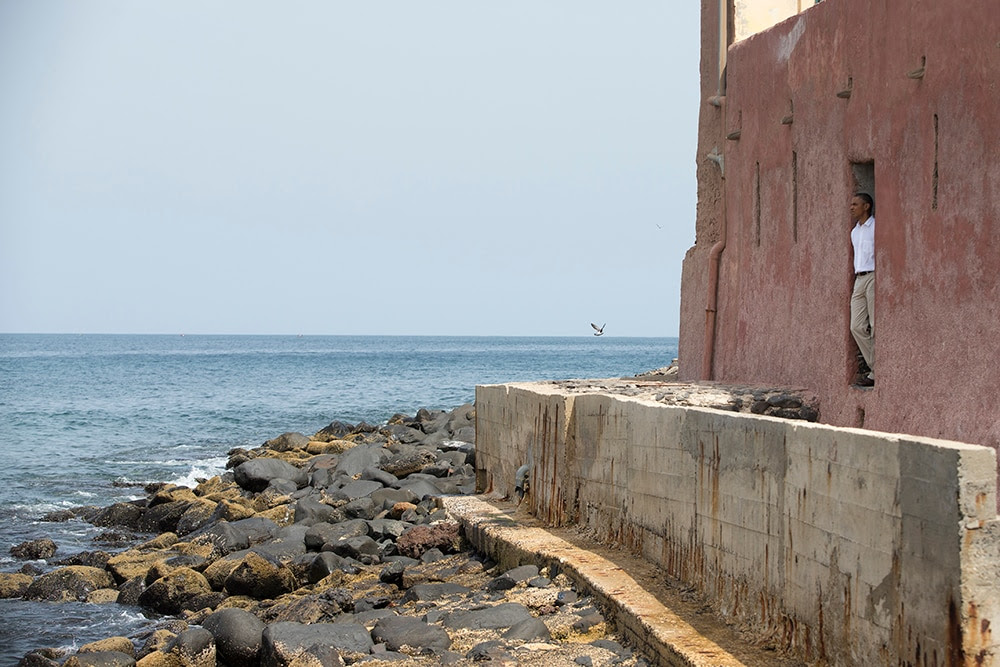 President  Obama looks out of the “door of no return” during a tour of Goree Island. (Evan Vucci/AP)
By Max Fisher
When President Obama visited Senegal’s Goree Island on Thursday, pausing for a moment to gaze West across the Atlantic Ocean from the “Door of No Return,” a famous symbol of the slave trade, you could almost hear the echoes of a quote from Martin Luther King Jr. that he often cites: The arc of the moral universe is long, but it bends toward justice.
Obama, speaking to reporters after the rare moment of solemnity, said it had been “very powerful” for him to see the world-famous site, which helped him “fully appreciate the magnitude of the slave trade” and “get a sense in an intimate way” of the hardships slaves faced. He called the trip a reminder that “we have to remain vigilant when it comes to the defense of human rights.”
“This is a testament to when we’re not vigilant in defense of human rights, what can happen,” he said. “Obviously, for an African American, an African American president, to be able to visit this site, gives me even greater motivation in terms of human rights around the world.”
The door was the point out of which many, perhaps millions, of African slaves took the final step from their home continent and onto the slave ships that would bring them to the new world, if they even survived the journey. Or that’s the story according to Goree Island official history, anyway. The truth may actually be far more complicated.
No one doubts the vast scale or horrific consequences of the trans-Atlantic slave trade, which destroyed countless communities in Africa, tore families apart, forced millions into bondage and killed perhaps one in 10 just during their voyage across the ocean. But it turns out that Senegal’s famous Door of No Return might not actually have played a very significant role in that story. And the wide gulf between the myth of the door and its reality may actually be, in itself, a revealing symbol of our relationship to this dark chapter in world history. What Obama really saw at Goree Island’s famous, pink-walled building may not have been a monument to slavery’s history so much as its haunting legacy and ineffable memory.
If you ask the stewards of this museum on Goree Island what happened there, they’ll likely refer you to the plaques on the wall, which say that millions of slaves passed through the building that Obama visited Thursday, now called the House of Slaves. That’s been the story for years. In 1978, the United Nations cultural body formally named it as a world heritage site, explaining that “From the 15th to the 19th century, it was the largest slave-trading centre on the African coast.” When Nelson Mandela visited in 1991, a tour guide told him that a hole beneath some stairs had been used as a cruel holding cell for disobedient slaves; Mandela insisted on crawling inside. It was also visited by Pope John Paul II, Presidents Bill Clinton and George W. Bush and many African heads of state.
But if you ask Africa scholars, they’ll tell you a very different story. “There are literally no historians who believe the Slave House is what they’re claiming it to be, or that believe Goree was statistically significant in terms of the slave trade,” Ralph Austen, who as a professor emeritus at the University of Chicago has written several academic articles on the subject, told the Associated Press.
Historical studies, according to Austen and other academics who spoke to the AP, suggest that 33,000 slaves were transferred from Goree Island – a huge number to be sure, but a tiny fraction of what the island’s official history claims. And, of those, perhaps zero were moved from the House of Slaves or out of its Door of No Return. “Historians say the door faced the ocean so that the inhabitants of the house could chuck their garbage into the water,” the AP says. “No slaves ever boarded a ship through it.” The historian Ana Lucia Araujo told the news agency, “It’s not a real place from where real people left in the numbers they say.”
Historians first uncovered the apparent truth about Goree in the 1990s. But almost 20 years later, the site’s emotional power is still strong – as is its prominent place in a history that it actually had very little to do with. But that might be about something much bigger than just the persistence of myth or the challenge in overturning a too-good-to-be-true story.
As academics downplayed the historical role of Goree in past centuries, a very different kind of scholar began to study its significance today, for Africans and members of the African diaspora. Katharina Schramm, in a book on the role of history in African ideologies today, called the Door of No Return a symbol of “the cultural amnesia and sense of disconnection that slavery and the Middle Passage stand for.” The door, she wrote, has become increasingly associated not just with its largely fictional past but with its very real present as a place of historical “healing and closure,” sometimes now described as a “Door of Return” out of slavery’s shadow.
Dionne Brand, a Canadian poet and novelist who often writes about race, explored the symbolic power of Goree’s sites at length in a 2002 book on identity and history, “A Map to the Door of No Return: Notes to Belonging.” She wrote that the door, whatever its role in past centuries, is today “a place to return to, a way of being” for people, like her, struggling to confront the role of slavery in her family’s past. Dionne writes, in a passage that might have resonated with Obama as he looked through the door and over the Atlantic:

The door signifies the historical moment which colours all moments in the Diaspora. It accounts for the ways we observe and are observed as people, whether it’s through the lens of social injustice or the lens of human accomplishments. The doors exists as an absence. A thing in fact which we do not know about, a place we do not know. Yet it exists as the ground we walk. Every gesture our bodies make somehow gestures toward this door. What interest me primarily is probing the Door of No Return as consciousness. The door casts a haunting spell on personal and collective consciousness in the Diaspora. Black experience in any modern city or town in the Americas is a haunting. One enters a room and history follows; one enters a room and history precedes. History is already seated in the chair in the empty room when one arrives. Where one stands in a society seems always related to this historical experience. Where one can be observed is relative to that history. All human efforts seem to emanate from this door.

Historians, since realizing the banal truth of Goree Island in the 1990s, have been struggling with how, or whether, to reconcile their accounting with the island’s power today, how to square what actually happened at this house in Senegal and the Door of No Return as it is today felt and perceived by visitors from Nelson Mandela to Obama. If no slaves ever actually stepped through the door, can it still be a symbol of the slave trade that did in fact reshape entire continents, of slavery’s still-unfolding legacy? In 1995, as an early iteration of this still-going debate raged on an e-mail listserv for Africa scholars, the scholar John Saillant, then of Brown University, argued that Goree could still matter, even if it turned out that millions of slaves hadn’t really moved through it. “We can understand Goree as important & interesting without extravagant claims about numbers,” he wrote.
http://www.washingtonpost.com/blogs/worldviews/wp/2013/06/28/what-obama-really-saw-at-the-door-of-no-return-a-debunked-memorial-to-the-slave-trade/?hpid=z2
Posted by theodore miraldi at 2:22 PM