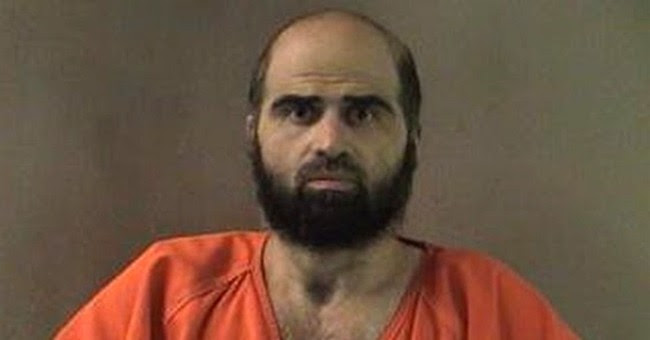 
A federal judge has finally selected a trial date for accused Fort Hood mass-murderer Nidal Malik Hasan -- July 9. We'll see if it actually happens. If you've forgotten that mass shooting, then the media had scored a point for President Obama. The Pentagon dismissed the terrorist attack as "workplace violence," the Obama media nodded in agreement and the massacre vanished from public memory.
Hasan went on his deadly rampage, killing 13 and wounding another 32, on Nov. 5, 2009. By the beginning of 2010, the networks were already in "sleep" mode. On the one-year anniversary, only NBC filed a story (that completely avoided the word "Obama"), while CBS had a single anchor brief. Amazingly, ABC offered nothing.
In the 2012 re-election year, this was the totality of news coverage of Nidal Hasan up to the third anniversary: nothing on ABC, one brief on NBC, and one news story on CBS. Coverage of this brutal terrorism on our shores would upset the heroic Obama-beat-Osama narrative, so the "new" media "reported" virtually nothing.
It's not that there weren't news events happening. At the end of January 2011, Hasan was judged to be sane for trial by an Army board. He was formally arraigned on July 20, but he did not enter a plea. The judge then set a trial date of March 5, 2012. Then Hasan switched lawyers, pushing that date back further to allow the lawyers to prepare some kind of defense. All of these developments qualified as stories; they generated seconds -- if anything.
Then in July 2012, a judge held the "alleged" killer in contempt for refusing to shave his beard for alleged religious reasons. That legal mess went on until September, when it was ruled it was not a violation of Hasan's religious freedom to be shaved. Then Hasan's defense lawyers filed two appeals. In mid-October, an appeals court ruled Hasan could be shaved. And the defense lawyers filed an appeal to the appeals court! Thus they prevented any trial before Election Day.
Break out the "Mission Accomplished" banner. But journalists couldn't find the time to ask, "How long does this mass-murderer get to delay his own trial?" It almost makes you wish the police had better aim during the crossfire.
The pattern continued. On Dec. 4, another court vacated Hasan's contempt-of-court convictions and removed the judge, Col. Gregory Gross, claiming he had not shown the "requisite impartiality" toward the mass murderer. Then they named a new judge, Col. Tara Osborn. This entire morass went ignored by most of the major media, kept firmly secured in the national memory hole. (You follow the news. Do you know that narrative?)
http://townhall.com/columnists/brentbozell/2013/06/26/fort-hood-justice-delayed-and-ignored-n1627684?utm_source=thdaily&utm_medium=email&utm_campaign=nl
Posted by theodore miraldi at 11:20 AM