can be forced to testify in targeting probe 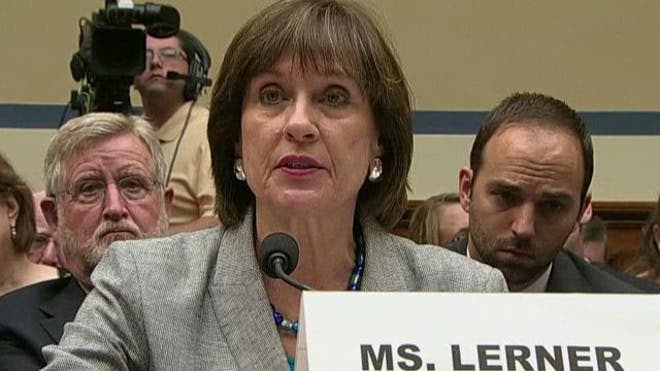 A House Republican-led committee approved a resolution Friday declaring that high-ranking IRS official Lois Lerner waived her Fifth Amendment right against self-incrimination by delivering a statement before the committee in May.
Lerner used to oversee the IRS division that targeted groups for additional scrutiny when they applied for tax-exempt status. At a May 22 hearing, she invoked her right not to answer lawmakers' questions after declaring in an opening statement that she had done nothing wrong.
Members of the House Oversight and Government Reform Committee voted along party lines Friday morning, with 22 Republicans saying she waived the Fifth and 17 Democrats arguing she did not. Lerner remains under subpoena, and the committee believes it could bring the long-time IRS official back and compel her to testify.
Rep. Darrell Issa, R-Calif., chairman of the committee, said at the opening of Friday's meeting that "I believe Lois Lerner waived her Fifth Amendment privileges."
"She did so when she delivered an opening statement," Issa said.
Rep. Trey Gowdy, R-S.C., reiterated Issa's argument, delivering a fiery speech about Lerner's attempt to protect herself under the Fifth.
Gowdy said Lerner made nine separate assertions, with the advice of counsel, and then authenticated a document.
"That's not how the Fifth Amendment works," Gowdy said. "You're not allowed to just say your side of the story ... She could have sat there and said nothing."
Democrats, meanwhile, like Rep. Gerry Connolly, D-Va., challenged Gowdy's argument, calling attempts to block Lerner's invoking of the Fifth Amendment "an egregious abuse of power that tramples the Constitution and serves no valid legislative purpose."
Connolly said that "the majority has brought us to a point where we risk allowing this committee to be transformed into a Star Chamber proceeding that establishes future Legislative Branch precedent where any chairman -- whether a Democrat or a Republican -- is free to compel an American invoking their constitutional right against self-incrimination to physically appear before the Committee for no other reason than to be pilloried, delayed, embarrassed, and burdened into unknowingly, unintentionally, and ironically, forfeiting the very sacred constitutional right that is intended to protect every American against forced self-incrimination by the government."
"You may make a small-term political gain," Connolly warned Republicans, but "at a long-term political cost."
The committee is scheduled to vote Friday on whether Lerner waived her Fifth Amendment right not to answer questions by making an opening statement.
Legal scholars have differed in their views on the committee's case against Lerner, who the IRS has placed on administrative leave.
Lerner's lawyer, William Taylor, said he disagreed with the committee's claim.
"There was nothing voluntary about her statement," he said in a statement. "She had informed (the) committee that she would invoke and requested to be excused and (the) committee ordered her to appear and invoke her rights in public.
"It went so far as to serve a subpoena on her to assure that she would be compelled to attend, unlike other witnesses who appeared voluntarily.  In any event, protesting your innocence and invoking the right not to answer questions, which is what she did, is not a waiver."
Fox News' Chad Pergram, Cristina Corbin and the Associated Press contributed to this report.