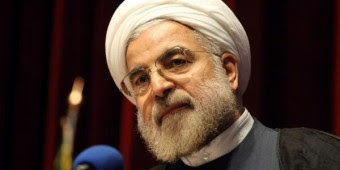 Iran’s newly elected president, Hassan Rohani, attributed his victory in the June 15 voting to the 12th Imam, Mahdi, a statement with ominous overtones in the Islamic regime’s quest for nuclear weapons.
The Shiites believe that at the end of times, the 12th Imam, a 9th-century prophet, will reappear with Jesus Christ at his side, kill all the infidels and raise the flag of Islam in all four corners of the world. Many analysts believe Iran is seeking nuclear capability to bring on that Armageddon.
“This political [election] was due to the kindness of the last Islamic messiah [Mahdi],” Rohani said Friday.
Kayhan newspaper, the main media outlet of the regime and the mouthpiece of the supreme leader, Ayatollah Ali Khamenei, ran a centerpiece headline Saturday reporting Rohani’s statement: 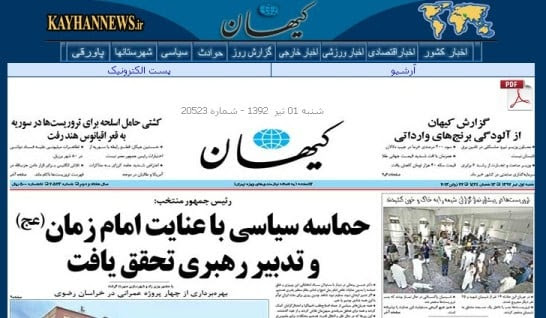 “This victory and the epic saga is without a doubt due to the special kindness of the Imam Zaman (Mahdi) and the measures taken by the supreme leader, especially his guidance and words. … Without his management then it was not clear if the people of Iran would witness such a day filled with joy,” Rohani said.
“I am so happy that there is a feeling of joy in our society and that the election took place in the month of Shaban [the 8th Islamic month, representative of courage and blessings], which is the month of victory,” he said.
Become a part of the investigative reporting team uncovering the truths about Iran, and get author Reza Kahlili’s “A Time to Betray” about his life as a double agent inside Iran’s Revolutionary Guards.
Much of the Western media in reporting on the election results proclaimed that Rohani is a “moderate and reformist” cleric.
An op-ed in the Los Angeles Times by David Horsey, for example, called Rohani’s election good for America and bad for the “neocons.” A piece in the Huffington Post by Flynt and Hillary Leverett, long-time supporters of dialogue with the Islamic regime, urged President Obama to approach Rohani as this represents a new opportunity, but the U.S. must accept the legitimacy of the Islamic Republic. A third op-ed, in the Christian Science Monitor by Scott Peterson, called Rohani a “diplomat sheikh” and claimed that he has shown flexibility and a willingness to compromise when he served as the regime’s nuclear negotiator.
An exclusive WND report on June 16, however, showed that Rohani has been a major player in the regime’s deceitful policies. He was put in charge of Iran’s nuclear team in 2003 by Khamenei and the so-called moderate president at that time, Mohammad Khatami. He succeeded in preventing further U.N. resolutions by agreeing to suspend parts of Iran’s nuclear activity, but, as the International Atomic Energy Agency indicated, Iran’s nuclear program never truly stopped.
In 2008, Abdollah Ramezanzadeh, the former parliamentary speaker and secretary of the Iranian government during Khatami’s term, revealed that while Khatami was president and through Rohani’s efforts, “We had an agreement for the suspension of enrichment, but we were importing all the necessary parts for our nuclear activity. We were conducting our policies on two fronts: one to continue negotiations openly and keep the Americans away from such negotiations, and the other to continue our nuclear activities in secret.”
Previous statements by the president-elect clearly show his radical views. Rohani had called the 2009 Iranian protesters of corrupt elections “thugs” and said that, “If the regime had not acted, the revolutionary forces (plainclothes police) would have put the protesters in their place.”
In 2009, millions of Iranians protested against the election fraud that gave Mahmoud Ahmadinejad a second term. Thousands were arrested and many tortured, raped and executed.
Rohani made a similar statement about the 1999 student uprising: “These students are so despised and inferior that they could not be labeled as a movement to change the regime. If the officials had not prohibited (the students from rioting), our people would have cut them in pieces.”
A Revolutionary Guard intelligence analyst who has defected to a Scandinavian country predicted the selection of Rohani as the next president one week before the election and said the regime constantly creates an image of division within its political system between so-called conservatives and moderates. The aim of tapping the perceived moderate Rohani as the winner was to deceive the West yet again by creating new hope that there could be meaningful negotiations over Iran’s illicit nuclear program, he said, while buying even more time to develop nuclear weapons and thereby becoming untouchable by the West.
The fact that Rohani served as the representative of the supreme leader to the Supreme National Security Council since 1989, the defector said, shows that the supreme leader regards him as one of the regime’s most trusted figures. But more importantly, since all of the regime’s actions, from its nuclear activity to arming terrorists and its terrorist activities, are decided by that council, there is no doubt that Rohani participated in all of its terrorist decision-making.
Some of those decisions include the 1994 Jewish Community Center bombing in Buenos Aires, the 1996 Khobar Tower bombings in Saudi Arabia and the 2012 Burgas, Bulgaria, bus bombing.
Ayatollah Movahedi Kermani, in his Friday prayer speech last week congratulating Rohani for his election, stated that, “Before the reappearance of Imam Zaman [Mahdi], the struggle will reach its peak … in that fight there won’t even be mercy on the womb in the mother’s belly.”

Read more at http://www.wnd.com/2013/06/new-iran-president-thanks-messiah-for-victory/#JVRtoMq1EPqQGMgB.99
Posted by theodore miraldi at 4:38 PM