Tell prosecutors charges should include 'war crimes, crimes against humanity' 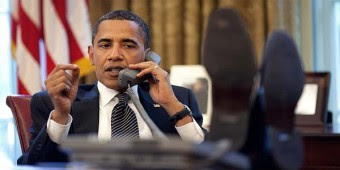 President Obama has appointed Muslims to high U.S. government positions, once declared America no longer Christian, is working on direct talks with the Taliban and has plans to hand over weapons to Muslims in Syria.
He has also advocated for the “Arab Spring” movement that has put hard-line Islamic leaders in power in the Middle East.
None of that, however, is good enough for a Muslim Lawyers Association based in South Africa.
Members there are taking that nation’s National Prosecuting Authority to court for refusing to make plans to arrest Obama when he visits South Africa in a few weeks. The Africa trip is expected to cost U.S. taxpayers $60 million to $100 million
In a report by The Citizen, Muslim Lawyers Association attorney Yousha Tayob said, “We will ask the court to review the decision neither to investigate or prosecute and to order them to commence a full investigation.”
MLA officials believe Obama’s drone program, through which he has ordered the deaths of numerous suspects overseas, is reason enough for him to be “investigated, charged, arrested, and tried in a South African court for war crimes, crimes against humanity, and genocide.”
The Citizen said the allegations come through the Rome Statute of the International Criminal Court.
“The [drone] program is responsible for extra-judicial killings of both innocent civilians as well as U.S. citizens abroad. The drone strike policy has continued unabated with total disregard for territorial sovereignty and this is cited as the primary reason that Obama should be investigated,” the MLA told the news outlet.
The National Prosecuting Authority said it had received the demands from the Muslims, but Tayob said the organization was not going to investigate.
Nor was it going to arrest Obama, the report said, a plan that had been endorsed by the Media Review Network.
Executive Director Iqbal Jassat told The Citizen that Obama’s visits will be protested because of his failure to halt the “occupation” of Muslim nations.
“We have rallied behind these actions. Levels of pressure developed by civil society would force the U.S. government to review the purpose of this visit and possibly lead to the cancellation,” Jassat told the news outlet.
“Obviously all his appeasement and accommodation of Muslims has won him no hearts or minds among the MLA of South Africa,” noted Islam expert Robert Spencer at JihadWatch.

Read more at http://www.wnd.com/2013/06/now-its-muslim-lawyers-demanding-obamas-arrest/#YGqRV1ObZU7CYuI0.99
Posted by theodore miraldi at 10:18 AM