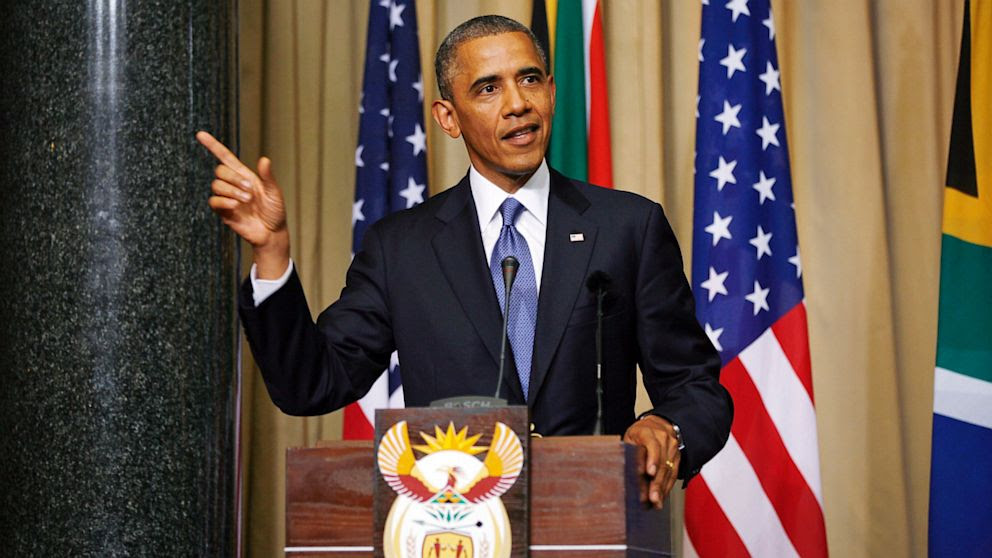 Although President Obama will not get a chance to see Nelson Mandela on his trip to South Africa, he is using his historic visit to pay tribute to the man he calls a hero to the world and will meet today with the Mandela family.

At a joint press conference with South African President Jacob Zuma this morning, President Obama spoke extensively about Mandela's legacy.
"Our thoughts and those of Americans and people all around the world are with Nelson Mandela and his family and all of South Africans," Obama said. "The struggle here for freedom, Madiba's moral courage, this country's historic transition to a free nation has been a personal inspiration to me, an inspiration to the world, and it continues to be."
Obama's two-day visit to South Africa -- and his entire week-long visit to the continent -- has been dominated by the Mandela vigil, giving Obama to speak about what Mandela means to Africa and the rest of the world.
"The outpouring of love that we've seen in recent days shows that the triumph of Mandela and this nation speaks to something very deep in the human spirit," Obama said. "That's what Mandela represents, that's what South Africa can represent to the world and what brought me back here."
Later, when asked about his policy toward Africa, Obama again returned to Mandela.
"Mandela shows what was possible when a priority is placed on human dignity, respect for law, that all people are treated equally," Obama said.
"And what Nelson Mandela also stood for is that the well-being of the country is more important than the interests of any one person," Obama continued. "George Washington is admired because after two terms he said enough, I'm going back to being a citizen. There were no term limits, but he said I'm a citizen. I served my time. And it's time for the next person, because that's what democracy is about. And Mandela similarly was able to recognize that, despite how revered he was, that part of this transition process was greater than one person."
At the joint press conference, President Zuma offered an update on Mandela's health -- saying there has been no change in his health but that he hopes he will be able to leave the hospital soon.
"The position of former president Mandela, he remains critical but stable," Zuma said. "Nothing has changed so far. We are hoping that he is going to improve. With all the prayers and good wishes that have been made, everyone is wishing Mandela well. The doctors who are tending to him are doing everything -- these are excellent doctors. We hope that very soon, he will be out of hospital."
Visiting with Mandela's Family
Obama will not visit the hospital to meet Mandela "out of deference to Nelson Mandela's peace and comfort and the family's wishes, [the president and first lady] will not be visiting the hospital," the White House said.
The president and first lady will, however, meet privately with members of the Mandela family "to offer their thoughts and prayers at this difficult time."
Obama spent about 25 minutes meeting with the Mandela family at the Nelson Mandela Center of Memory in Johannesburg.
He also spoke, via telephone, with Mandela's wife Graca Machel, who is with her husband at the hospital.