Not individualism, but the reaction against it, paved the path for marriage equality. 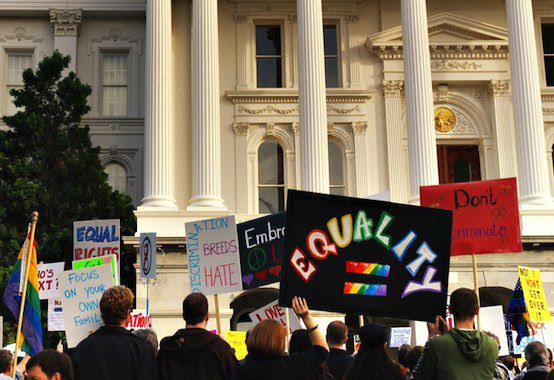 Rod Dreher recently set the marriage debate in its broadest possible moral context: “Gay marriage signifies the final triumph of the Sexual Revolution and the dethroning of Christianity because it denies the core concept of Christian anthropology.” “Very near the center” of that Christian culture, he says, citing sociologist Philip Rieff, was its “rejection of sexual individualism,” a rejection that allowed Christianity to displace the “sexual autonomy and sensuality of pagan culture” and substitute its own morality as the operational value system of the West.
The problem today is that “the myth of individual freedom” has by now torn “away the last vestiges of the old order, convinced that true happiness and harmony will be ours once all limits have been nullified.” Gay marriage is individual freedom’s “decisive blow” because it destroys the last communal restraint: traditional marriage. Since every culture “imposes a series of moral demands on its members for the sake of serving communal purposes,” the lack of these limits in contemporary America portends the end of Western culture and represents its final “deconversion” from Christianity.
Dreher’s case that the battle over traditional marriage and family morality has been won by the left, especially among America’s young, is persuasive. But his description of how this happened is almost backwards: freedom and individualism are not to blame. And before retreating to the catacombs, it is well to look more closely at Rieff’s assumptions, which Dreher did warn were those of an unbeliever.
To Rieff, “the essence of any and every culture” is “what it forbids.” Modern freedom has “inverted the role of culture” by “releasing [us] from the old prohibitions” and grasping at “sexual expression and assertion,” which is “how the modern American claims his freedom.” Supporting gay marriage is the final logical result. But is Christianity’s role to support a culture, to serve communal rather than individual purposes, to set a culture’s prohibitions, even to support family?
Indeed, where did the subversive “myth of individual freedom” come from? It was Jesus himself who separated the individual from Caesar, reinforcing this with a remarkably un-communal statement: “Do you think I came to bring peace on earth? No I tell you but division. From now on there will be five in one family divided against one another, three against two and two against three” (Luke 12:49-53). When his disciples were confronted by potential converts who would not adopt the broadly Jewish cultural practices of the early Christian community, Peter, Paul, James, and the others freed the pagans from these cultural practices (Acts 15: 1-21). Paul went to the extent of freeing Christians from the restrictions of the Law itself (Gal: 3:23-29) and added “when Christ freed us, he meant us to remain free” (Gal: 5:1).
As the conservative thinker Frank Meyer emphasized, by freeing the individual, Christianity created a tension between its high standards—to be perfect as the Father is perfect, to turn the other cheek—and the impossibility of achieving them. This tension is the source of the energy that would make the West the world’s dominant civilization, but it also unleashed the impulse to impose a “human design of perfection upon a world by its nature imperfect.” No culture was safe from the potential excesses of utopianism once Christianity opened Pandora’s Box, unless it was restrained by the faith’s new commandment of love.
Ancient civilizations were communal, with sexual institutions that often included polygamy or concubinage. Homosexuality always existed too. These were defended by their supporters as traditional rather than as libertine practices. As Dreher notes, Christianity’s liberation of women and slaves from the “sexually exploitive Greco-Roman culture” was one secret of its success. Ancient sexuality was firmly controlled by a rigid patriarchal social order, which was not undermined until Pope Gregory I forbade marriage to close kin in the 6th century AD. Before this, marriage was between families, not individuals. It was Christianity that made marriage more of a free individual choice.
Dreher and Rieff are correct in a strange way when they find it “pathetic” to consider Christianity “a therapeutic adjunct to bourgeois individualism.” But Christianity is in fact the source of individualism, which simply did not exist before. Almost everything BC was clan, cult, tribe, and state.
If freedom is the problem, Christianity is the culprit for “inverting” the role of culture and freeing the individual to question tradition. Citing Europe’s history of war and unrest, no less a critic than Rousseau concluded that Christianity’s dual forms of loyalty to church and state were “clearly bad” because they “destroy social unity” and civic peace. Rousseau’s solution was that the “sovereign fix the articles” of a new civic religion that would provide for order, welfare, morality, and even freedom properly understood—that is, freedom as defined solely by the state.
The whole modern project has been an attempt to control the freedom unleashed by Christianity’s dual loyalty, to re-create the conformity to “traditional” culture that predated the Christian moral liberation. What we see today in the success of gay marriage is not really freedom run amok, but the result of turning the power to define morality over to the state, or to the dominant group representing it.
People pretty much absorb the prevailing cultural stereotypes generated by the media, as Walter Lippmann taught us. And what finally persuaded a mass public—by way of constant reinforcement from TV news, sitcoms, and in every classroom—was changing the argument from freedom to “marriage equality.” In fact, the American people were told that allowing equality in marriage was the moral thing to do. This assertion of cultural and political power, not the individual freedom arising from Christianity, is what has truly led to what Dreher calls the “final triumph of the Sexual Revolution.”
http://www.theamericanconservative.com/articles/same-sex-marriage-isnt-about-freedom/

Posted by theodore miraldi at 10:49 AM