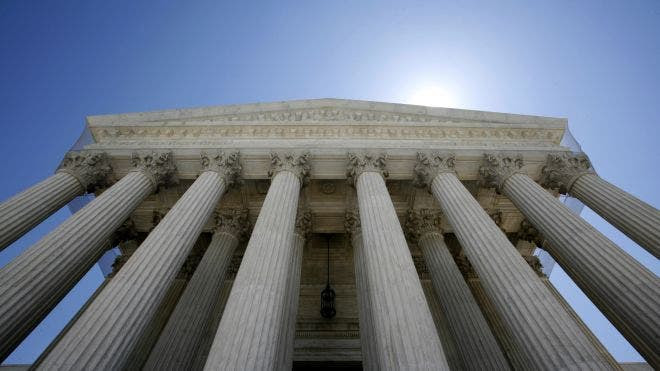 
In its first ever case on the issue of gay marriage, the Supreme Court has struck down a federal law barring the recognition of same-sex marriage in a split decision, ruling that the law violates the rights of gays and lesbians and intrudes into states' rights to define and regulate marriage.
Justice Anthony Kennedy, the court's conservative-leaning swing vote with a legal history of supporting gay rights, joined his liberal colleagues in the decision, which will dramatically expand the rights of married gay couples in the country to access more than 1,000 federal benefits and responsibilities of marriage previously denied them.
DOMA seeks to injure the very class New York seeks to protect. By doing so it violates basic due process and equal protection principles applicable to the Federal Government.
The case is Windsor v. United States, a challenge to the federal 1996 Defense of Marriage Act (DOMA), which prohibits the federal government from recognizing same-sex marriages even in the 12 states and District of Columbia that allow them. DOMA extends to more than 1,000 federal laws and statutes, including immigration, taxes, and Social Security benefits.
Eighty-three-year-old New Yorker Edith Windsor brought the suit after she was made to pay more than $363,000 in estate taxes when her same-sex spouse died. If the federal government had recognized her marriage, Windsor would not have owed the sum. She argued that the government has no rational reason to exclude her marriage of more than four decades from the benefits and obligations other married couples receive.
DOMA was signed into law by President Bill Clinton in 1996.
Kennedy authored two of the most important Supreme Court decisions involving, and ultimately affirming, gay rights: Lawrence v. Texas (2003) and Romer v. Evans (1996). In Romer, Kennedy struck down Colorado's constitutional amendment banning localities from passing anti-discrimination laws protecting gays and lesbians. In Romer, Kennedy invalidated state anti-sodomy laws, ruling that gay people have a right to engage in sexual behavior in their own homes.
The Bipartisan Legal Advisory Group (BLAG) has defended DOMA since the Obama administration announced they believed the law was unconstitutional in 2011. (Chief Justice John Roberts criticized the president for this move during oral arguments in the case, saying the president lacked “the courage of his convictions” in continuing to enforce the law but no longer defending it in court.)
http://news.yahoo.com/blogs/news/supreme-court-strikes-down-doma-140330141.html