Bad news is good news for the Obama economy

The Obama administration is stuck in a surreal world, where bad news is good news for the economy it has created. Trickle down from the stock market and artificially low interest rates are the only drivers of the economy. The second-estimate gross domestic product report this week will be vital to the life-support system that President Obama has constructed for the 1 percent.  If the revised GDP numbers are good – relatively speaking – it will suggest that bond-buying by the Federal Reserve will be tapered in the near future.  If the tapering begins, the stock market is going to fall.  If the stock market falls, the wealth effect and the trickle-down that stock market boom has produced are going to dry up.
Obviously, an economic crash would be terrible, but so would a slowing down of the conveyor belt of money between Washington and Wall Street, which is fueling what little growth we have.
This puts Democrats in an odd position; right now the only thing worse than trickle-down economics is no trickle-down economics. 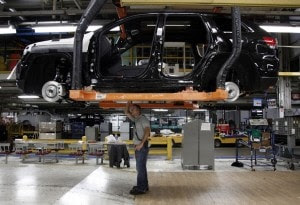 
Another disappointing earning cycle is behind us, which confirmed that there is no top-line growth almost anywhere in this economy.  And in case you needed more bad news, the Wall Street Journal noted today that durable-goods orders dropped 7.3 percent in July, almost double the estimated drop.
Suffice it to say, GDP growth is only about 40 percent of what the administration promised during Obama’s reelection campaign. It’ll be interesting to see if the Democrats begin to panic or if they’ll be willing to stay the course through the midterm elections.
And, oh by the way, why does it appear that there are only two choices for the president to consider for the position of Federal Reserve chairman? Why not appoint someone a little new and different? Who says the Federal Reserve chair has to be a dry academic/economic theoretician/political retread?  What if President Obama appointed someone like David Smick, author of “The World is Curved,” who has proved he is one of the world’s foremost economic fortune-tellers?  Or what about John Taylor from Stanford, who is so smart that Obama should overlook the fact that he’s a Republican? Or Ken Chenault, CEO and chairman of American Express? Or Mark Gallogly, who is a serious investor and someone the president has expressed confidence in in the past?  Or the president could even try to talk Jack Welch into taking the job.  Don’t tell me the savvy former chairman and CEO of General Electric doesn’t have sufficient economic credentials – and he is nothing if not independent.
This administration is stale and failing.  It needs to look for fresh approaches wherever it can.
http://www.washingtonpost.com/blogs/post-partisan/wp/2013/08/26/the-insiders-bad-news-is-good-news-for-the-obama-economy/
Posted by theodore miraldi at 4:19 PM