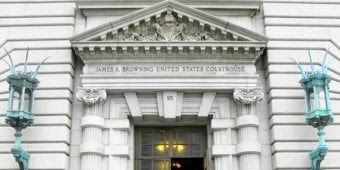 Bob Unruh
The 9th U.S. Circuit Court of Appeals has decided to censor some licensed therapists in California, including pastors, by upholding a ban on “change therapy.”
The ruling today will prevent minors who want counseling regarding unwanted same-sex attractions, behavior or identity from getting that help.

“Nor will licensed counselors be permitted to offer such counsel, despite the fact that their clients are currently benefiting from such counsel,” according to Liberty Counsel, which brought the case on behalf of minors who now are “significantly benefiting” from the counseling.
Also on the list of plaintiffs was the National Association for Research and Therapy on Homosexuality, or NARTH, and the American Christian Counseling Association.
Late last year, Liberty Counsel obtained an injunction from the appeals court to block implementation of the law, but the 9th Circuit decided today that California “has authority to prohibit licensed mental health providers from administering therapies that the legislature has deemed harmful.”
Liberty Counsel argued that no study has been done on the effect of change therapy on minors.
“California has no compelling or empirical reason to justify banning change therapy, especially when the client seeks such counsel,” said Liberty Counsel founder Mat Staver.
“The minors we represent do not want to act on same-sex attractions, nor do they want to engage in such behavior. They are greatly benefiting from this counseling. Their grades have gone up, their self-esteem has improved, and their relationships at home are much improved,” Staver said.
Staver said legislators and judges in California essentially have “barged into the private therapy rooms of victimized young people and told them that their confusion, caused by the likes of a Jerry Sandusky abuser, is normal and they should pursue their unwanted and dangerous same-sex sexual attractions and behavior, regardless of whether those minors desire their religious beliefs to trump their unwanted attractions.”
“This law is politically motivated to interfere with counselors and clients. The law is an astounding overreach by the state,” said Staver. “Under the law, counselors would be required to provide, and clients to receive, the viewpoint that same-sex attractions are normal and good. Any counsel to reduce or eliminate same-sex attractions is now banned in California.”
Brad Dacus, president of the Pacific Justice Institute, called the decision a “dark day for those who believe in the First Amendment and the rights of parents over the proper upbringing of their children.”
“Make no mistake, we are not finished in our efforts to overturn this outrageous legislation,” he said.
California was the first state to approve such First Amendment limitations, and now New Jersey has followed, prompting WND columnist Matt Barber to express concern.
“The connection between homosexual abuse and ‘gay identity’ is undeniable. Consider this: Researchers from the Centers for Disease Control and Prevention (CDC) have found that homosexual men are ‘at least three times more likely to report CSA (childhood sexual abuse)’ than heterosexual men,” he wrote. “Moreover, the Archives of Sexual Behavior – no bastion of conservatism – determined in a 2001 study that nearly half of all gay-identified men were molested by a homosexual pedophile: ’46 percent of homosexual men and 22 percent of homosexual women reported having been molested by a person of the same gender. This contrasts to only 7 percent of heterosexual men and 1 percent of heterosexual women reporting having been molested by a person of the same gender’ noted the study.”
He said besides the fact the laws violate the Constitution, the underlying claim isn’t true.
“For instance, both New Jersey Democrats and [Gov. Chris] Christie cited the American Psychological Association, or APA, as justification for this gross infringement on the right of self-determination. Although, no doubt, the highly liberal APA supports this and similar Sandusky Laws for political reasons, the group’s own task force on change therapy – led entirely by members who themselves are ‘gay’-identified or known political activists – has had to admit, nonetheless, that homosexuality itself ‘refers to feelings and self-concept,’” he explained.
“Here’s the kicker: The APA also acknowledged that there is no evidence whatsoever that change therapy harms minors,” he continued.
Liberty Counsel earlier had told the appeals court such limits on speech are prohibited.
It was last year when California lawmakers adopted a bill to ban medical and counseling professionals from engaging in “change therapy,” a practice utilized to reduce homosexual urges in those who don’t want them.
The bill would provide that any sexual orientation change efforts attempted on a patient under 18 years of age by a mental health provider be considered unprofessional conduct, subjecting the provider to discipline by his licensing entity.
Liberty Counsel argued: “A viewpoint-based speech restriction has never been upheld by the Supreme Court or any court. … S.B. 1172 is viewpoint-based because it allows counselors to discuss and clients to hear about the subject of sexual orientation, behavior, or identity (hereafter SSA), but precludes a particular viewpoint on that subject, namely that SSA can change. S.B. 1172 silences one viewpoint (change) on an otherwise permissible subject (SSA). Sexual orientation change efforts (SOCE) in S.B. 1172 are defined as counseling that seeks to ‘eliminate or reduce sexual or romantic attractions or feelings towards individuals of the same sex.’”
The law was adopted by majority Democrats in the state legislature and signed by Democrat Gov. Jerry Brown.
S.B. 1172 is from a legislature that also demanded that school children “celebrate” the life of homosexual activist Harvey Milk.
The state’s lawmakers also recently adopted a requirement that schools allow students to have access to gender-specific facilities, such as locker rooms and rest rooms, according to their “gender identity.”
California has adopted numerous sexual indoctrination bills, including S.B. 48, which requires positive portrayals of lesbian, gay, bisexual and transgender persons in public school social studies and history classes.
Others cited by SaveCalifornia.com include:
Read more at http://www.wnd.com/2013/08/court-censors-licensed-california-therapists/#vODpwzrXqsRmQkrU.99
Posted by theodore miraldi at 5:56 PM