If US is serious about Syria we must target Assad 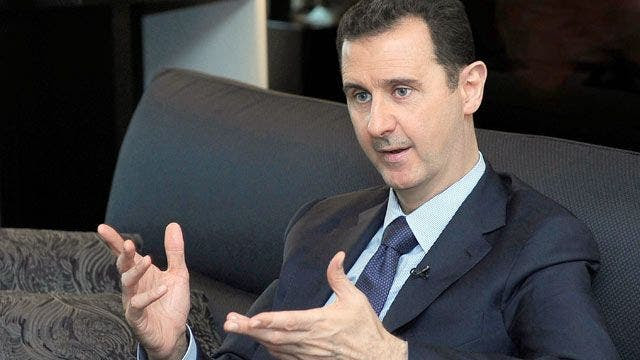 A headline the other day called President Obama a “reluctant warrior.” It was half-right. He’s reluctant, but not much of a warrior.

His feckless, indulgent dithering while Syria burns would be the low point of his foreign policy except for the fact that it is alarmingly typical. The president from the faculty lounge is proving again that he is simply no match for determined adversaries, terrorists and genocidal maniacs.
From the upheavals of the so-called Arab Spring to the “reset” with Russia to the “engagement” with Iran, Obama’s sophomoric habit of leading from behind has reduced the planet’s lone superpower to a paper tiger and emboldened those who would do us harm.

Reuters
ENOUGH: UN inspectors take samples yesterday from a Damascus site believed hit by chemical weapons.
Nearly five years into his presidency, it is still Amateur Hour in the White House.
The debacle in Syria illustrates what’s wrong with his worldview. While the president was busy apologizing for America, Syria exploded into a civil war that is spreading into other countries and could destabilize the entire region. Believing his rhetoric and pique would pass for a policy, Obama backed himself into a corner with no good options.
We can’t know what would have happened if America had played from its strengths. We only know disaster has followed his reckless decision to abdicate our leadership position.
Recall that after Bashar al-Assad opened fire on peaceful demonstrators in March 2011, then- Secretary of State Hillary Rodham Clinton called him a “reformer” and expressed confidence that he was no Moammar Khadafy. As the bodies piled up, Obama himself switched course, saying Assad must go.
He kept saying that as whole cities were leveled amid reports of torture, atrocities and slaughter. His warnings ignored, a year ago, Obama upped the ante, saying Assad’s use of chemical weapons would be a “red line” for action.
Assad crossed the red line twice — and still, the president hesitates. It’s not that he is going wobbly. Obama is wobbly.
Even now, as Washington and the world expect a military strike, its purpose is shrouded in a fog of half-measures, media leaks and political posturing.
White House officials promise to “punish” Assad while also insisting the aim is not “regime change.” The leakers helpfully include a list of possible military targets, vow the attacks will last “no more than two days” and be finished “before the president leaves for Russia next week.”
http://www.foxnews.com/opinion/2013/08/29/stop-dithering-mr-obama-if-us-is-serious-about-syria-must-target-assad/
Posted by theodore miraldi at 2:08 PM