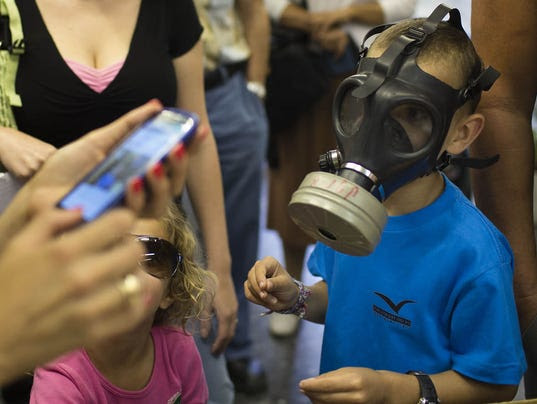 An Israeli child tries on a gas mask at a distribution center on Aug. 26 in Tel Aviv.(Photo: Uriel Sinai, Getty Images)
By Michele Chabin
JERUSALEM — Israel on Wednesday called up reserve soldiers with expertise in homeland defense while urging an increasingly nervous public to go about their daily lives amid threats of an attack from Middle East adversaries who vow to target Israel if the United States strikes Syria.
Israel's security Cabinet approved the call-up of "hundreds" of reservists on a day when Prime Minister Benjamin Netanyahu held consultations at the Defense Ministry, according to Haaretz newspaper.
Netanyahu, however, said in a statement that the risk of an attack on Israel was "low" and assured Israelis that the Israeli Defense Forces was prepared for any threats made by Syria and Iran.
"There is no reason to change daily routines," Netanyahu said. "We are prepared for any scenario. The IDF is ready to defend against any threat and to respond strongly against any attempt to harm Israeli citizens."
MORE: Britain seeks U.N. resolution
At the Supersol supermarket in the Talpiot industrial zone in south Jerusalem, shoppers were starting to stock up on ingredients for the Sabbath and the Jewish New Year's holiday which is next week.
In contrast to "war" shopping, customers carts were loaded with fruit, meat and honey cake – a traditional holiday dessert – not packages of bottled water, batteries, large number of cans or rolls of tape, the latter to be used to seal a room against a possible chemical weapons attack.
Still, the gas mask distribution center just across the street was overflowing with anxious people waiting for protective gear for their families, according to news reports. People waited in lines for hours as postal workers did their best to keep up with the demand.
Rina Ne'eman, an Israeli-American translator based in New Jersey, who is currently visiting Israel with her two grown children, decided Wednesday to relocate from Jaffa, just south of Tel Aviv, to a hotel in Jerusalem.
"We were in an apartment in Tel Aviv and in light of our complete inability to procure gas masks for my kids, who are not Israeli citizens, and the fact we had no secure space or shelter, we felt the proactive thing to do would be to move to Jerusalem, where common wisdom has it that people are safer during missile attacks," she said.
Although the Israeli government made some masks available to visiting foreigners during the Gulf War, the current shortage would seem to make that unlikely.
Ne'eman said that she and her children took a vote on whether to instead leave Israel. They decided against it.
"You go outside and know what's going on, know the anxiety level is ratcheted way high, but you don't see it in the street. We're here because Israel is an important part of us," Ne'eman said.
Traditionally, a large-scale call-up of reservists has been a signal for the Israeli public to prepare for some kind of military action.
Israel also said it is deploying all of its missile defenses to prepare against possible Syrian retaliatory attacks should Western powers carry out threatened strikes on Syria over its alleged use of chemical weapons against rebels seeking to topple the regime of President Bashar Assad.
Army Radio did not say how many of its air defense batteries meant to knock out incoming missiles were mobilized, according to the Jerusalem Post. The missile defenses include the short-range Iron Dome, the mid-range Patriot and the long-range Arrow II, the newspaper reported.
Damascus and Tehran have said Israel would be targeted if the West attacks Syria, even though Israel has not taken an active role in the civil war there. Israel has been attacked in the past when Western militaries have taken action in the Middle East. Iraq fired Scud missiles at Tel Aviv during the 1990-1991 U.S-led Gulf War.
"In light of the recent occurrences in the region, the IDF is taking the necessary defense measures to safeguard the state of Israel," the Israeli military told the Post.
Nachman Shai, an Israeli parliamentarian, told IBA news that, due to budget cuts, the country has a severe shortage of masks for the public.
"Forty percent of the public isn't protected," Shai said.
Shai, who played a key role in keeping the public calm during the Gulf War, predicted that "if it comes to it, Israel will retaliate" if attacked.
The public, he believes, is prepared for military action.
"Psychologically, the public is ready to see missiles enter the country," he said, adding that it is important for parents and teachers "to tell school kids what to do, so they will be prepared."
http://www.usatoday.com/story/news/world/2013/08/28/israel-syria/2712607/
Posted by theodore miraldi at 1:08 PM