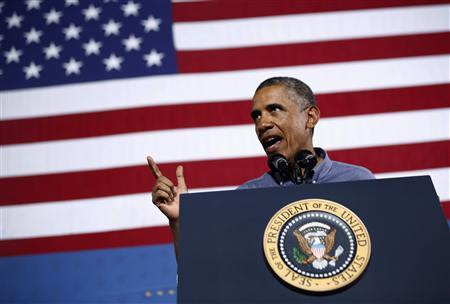 U.S. President Barack Obama delivers remarks on affordable education at Henninger High School in Syracuse, New York, August 22, 2013. Credit: Reuters/Jason Reed
By Jeff Mason and Matt Spetalnick
AUBURN, N.Y./WASHINGTON (Reuters) - President Barack Obama said in an interview broadcast on Friday that the United States must tread cautiously in response to an apparent poison gas attack in Syria even as his aides debated over the options for possible military action against the Syrian government.

In his first public comments since Wednesday's attack in the Damascus suburbs, Obama called the incident "very troublesome" and a "big event of grave concern" but made clear he was in no rush to get war-weary Americans entangled in another Middle East conflict.
Obama's wary response, which underscored a deep reluctance by Washington to intervene in Syria's 2-1/2-year-old civil war, came as senior U.S. officials weighed choices ranging from increased diplomatic pressure to the use of force, including possible air strikes on Syrian President Bashar al-Assad's forces, administration sources said.
A high-level meeting including members of Obama's National Security Council, the Pentagon, State Department and intelligence agencies was held at the White House late on Thursday but made no decisions on what to recommend, officials said, and further discussions were planned.
"What we've seen indicates that this is clearly a big event, of grave concern," Obama said in an interview on CNN's "New Day" program that aired as Assad's opponents braved the front lines around Damascus to try to deliver tissue samples to U.N. inspectors from victims of Wednesday's apparent poisoning.
But when pressed about his comment a year ago that chemical weapons use in Syria would be a "red line," Obama - who was on a two-day bus tour of the Northeast - expressed caution.
"If the U.S. goes in and attacks another country without a U.N. mandate and without clear evidence that can be presented, then there are questions in terms of whether international law supports it, do we have the coalition to make it work, and, you know, those are considerations that we have to take into account," Obama said.
"The notion that the U.S. can somehow solve what is a sectarian complex problem inside of Syria sometimes is overstated," he said.
MOUNTING PRESSURE
Though the White House has made clear that any U.S. response must await confirmation of the alleged chemical attack, pressure is mounting at home and abroad for Washington to act.
Obama's failure to confront Assad with the serious consequences he has long threatened would likely reinforce a global perception of a president preoccupied with domestic matters and unwilling to act decisively in the volatile Middle East, a picture already set by his mixed response to the crisis in Egypt.
The consensus in Washington and allied capitals is that a concerted international response can only succeed if the United States takes the lead.
But Obama has shown no appetite for intervention. Polls by Reuters/Ipsos and others have indicated that Americans are increasingly aware of the conflict in Syria, but as the news has worsened, opposition to intervention may actually be growing.
Obama called on Assad - whose government has denied carrying out a chemical attack - to allow a full investigation by United Nations inspectors already on the ground in Syria, but admitted he did not expect that cooperation.
Obama said it would be "very troublesome" if there is proof of a chemical weapons attack.
"That starts getting to some core national interests that the United States has, both in terms of us making sure that weapons of mass destruction are not proliferating, as well as needing to protect our allies, our bases in the region. This is something that is going to require America's attention and hopefully the entire international community's attention," he said.
But he stressed the importance of international law in responding to the incident and said he was wary of the financial and human costs of getting involved in complex foreign disputes. After extracting U.S. forces from Iraq, Washington is struggling to withdraw from Afghanistan after more than a decade of war.
"Sometimes what we've seen is that folks will call for immediate action, jumping into stuff that does not turn out well, gets us mired in very difficult situations, can result in us being drawn into very expensive, difficult, costly interventions that actually breed more resentment in the region," he said.
At Thursday's White House meeting, which lasted more than three hours, Obama's aides had a "robust discussion" of the diplomatic and military options at the president's disposal, an administration official said.
The official said there was spirited debate over the "pros and cons" but denied a New York Times report that the attendees were sharply divided among those who wanted to send Assad a harsh message and those who argued that military action would be reckless and ill-timed.
There have been significant disagreements within Obama's national security team in the past over how to respond to Syria's civil war, including over whether to arm Syrian rebels.
Among the military options now available for Obama's consideration are targeted missile strikes on Syrian military units believed responsible for chemical attacks or on Assad's air force and ballistic missile sites. Seen as more risky would be a sustained Libya-style air campaign against Assad's forces.
Obama has ruled out sending U.S. ground forces into Syria, and Thursday's White House meeting also steered clear of the idea of enforcing a "no-fly" zone there, the official said.
(Reporting by Jeff Mason and Matt Spetalnick; Additional reporting by Roberta Rampton; Editing by Vicki Allen and Eric Beech)
http://www.reuters.com/article/2013/08/23/us-syria-crisis-obama-idUSBRE97M0E420130823