The Bureaucracies That Ate Obama

The president's scandals are symptoms of a government too complex for anyone to control—including conservatives. 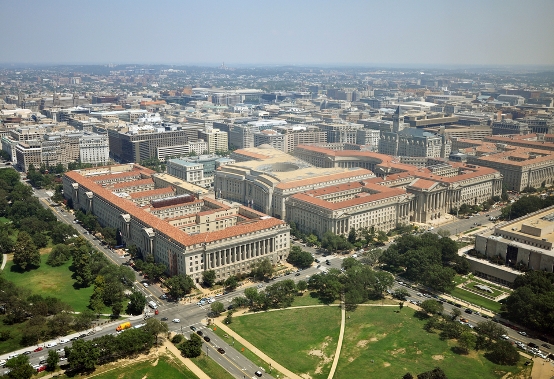 It has been great fun this summer watching the intelligentsia rebuking President Barack Obama for “acting like some bloke on a bar stool getting his information from the evening news” rather than like a good take-charge progressive president, as the Washington Post’s uber-liberal columnist Dana Milbank complained recently.
President Obama will accept “no control over the actions of his administration,” ignoring the Justice Department’s monitoring of AP reporter conversations, fumbling the responses to the Benghazi consulate assault and the Egyptian coup, and downplaying the IRS targeting of political groups. Yet the truth is too bitter for progressives to face since it undermines their central myth—that Washington experts efficiently manage pretty much everything. Conservatives should know better. Yet a Wall Street Journal editorial took a tone similar to Milbank’s, asking “if the president doesn’t run the government, then who does?” Charles Krauthammer went so far as to question whether “anyone is stupid enough to believe” that the IRS targeting was not planned from the top.
In fact, every serious student of public administration knows the federal government is unmanageable, a fact verified even by the progressive experts at the National Commission on the Public Service itself. The commission has proposed reforms for years—usually inadequate—but even they are routinely ignored by left and right. Its experts dare not question adding new ungovernable programs like Obamacare, but deep down they know the present system is already too bureaucratized, and adding large new programs must make things worse.
The dirty secret is that no one at the top runs these programs. The president has little idea what the two million person bureaucracy below him does. Poor Hillary Clinton was criticized for signing official cables on the Libyan fiasco, when everyone who knows anything knows no secretary of state ever sees 99 percent of what she signs. Krauthammer may not believe that relatively low-level IRS agents could decide to go after enemies all on their own. But many there actively supported Obama, and even the higher-ups named so far, with one possible exception, were liberal career employees. As far as the AP leaks, what Attorney General under attack, as Eric Holder has been, would dare question subordinates who invoke “national security”? What about the bureaucratic leaks if he did not signed off?
Ignoring that the bureaucratic forces and commitment necessary do not exist, neoconservatives keep demanding the U.S. save more failed states such as Syria. Oops—now it is Egypt again. Where did that come from? Some social conservatives want more power for the Department of Health and Human Services to “support families,” even though its bureaucrats are to the left of the IRS. Many economic conservatives supported the Treasury and Federal Reserve architects of the Wall Street bailout, when their bureaucrats have positive distain for the market. But the strangest bedfellow demanding bureaucratic help is the libertarian. He relies on judicial experts, especially those Ivy League-only stewards sitting on the Supreme Court.
Libertarians placing their hopes on nine old wizards from our elite universities, appointed for life and responsible to no one, confuse means and ends. Such libertarians want freedom as the end but do not want anyone outside the judicial system to be free to contradict the beliefs of the court when it comes to important matters like rights, which these days cover just about everything. Not being able to sue the feds because of sovereign immunity and judicial deference, these activists mainly go after the easier target of local government. The problem is that in targeting local abuses they inadvertently increase national power by nationalizing the local issues.
Even in the 2005 Kelo v. New London case brought against the taking of Susette Kelo’s beachside house and the transferring of it to a private developer—which did prompt many states to somewhat narrow their takings criteria—the unfortunate result was a 5-4 decision that expanded the 5th Amendment’s “public use” definition nationwide. In another Connecticut case, dentists pressured local officials to allow only licensed dentists to give advice on the use of teeth-whitening pastes, even though they are available to anyone over the counter. A suit was filed against this ridiculous, self-interested law, which after being lost was appealed to the feds as a violation of the U.S. Constitution. Is there some section there on teeth whitening?
Suits against local or state licensing restrictions have been filed regarding eyebrow threading, vending, hair braiding, limousine services, florists, interior designers, sign bans, yoga studios, tour guiding, and animal massages, among other things. All of these rules are undoubtedly frivolous and self-interested—but cannot local governments make and correct mistakes of their own without their betters in Washington telling them what they can and cannot do? The bottom line is that federal court decisions are a victory for centralization every time.
And the basic fact is that the national bureaucracy is sclerotic: it cannot act in a rational manner. It is overwhelmed, and even President Obama understands this. At the press conference that so irritated his liberal pals when he tried to explain the “glitches and bumps” reported about Obamacare, his explanation was unintentionally revealing: “Oh look, this thing’s, you know, not working the way it’s supposed to, and this happened and that happened. And that’s pretty much true of every government program that’s ever been set up.”
Every government program! The most important social-science lesson of the 20th century was revealed by economists F.A. Hayek and Ludwig von Mises, when they demonstrated that social life is too complex to be understood by—much less be managed by—any central political authority. We are all blokes sitting on bar stools. Private and public decentralization is the only rational solution. While commentators like Joseph Baldacchino of the National Humanities Institute are correct that decentralization without the local moral fiber to support it will fail, the only way to find out if there is still enough local fiber left is to attempt it.

Posted by theodore miraldi at 6:52 PM