A Funny Definition of Anarchy 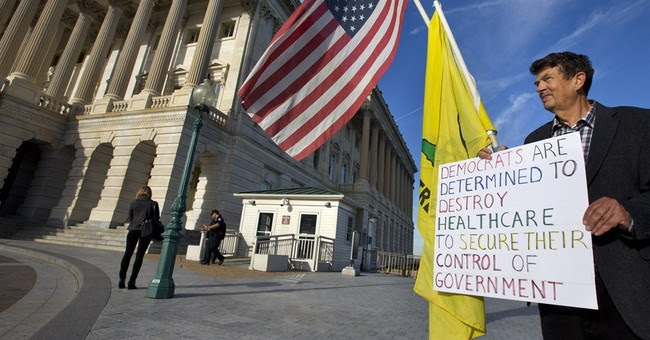 Jonah Goldberg
"It's the law of the land."
This is rapidly becoming the preferred shorthand argument for why criticism of Obamacare is just so, so wrong. It also serves as the lead sentence of a larger claim that all attempts to overturn the Affordable Care Act are really symptoms of a kind of extremist right-wing lunacy.
For instance, here's Senate Majority Leader Harry Reid, who walked out of the painting "American Gothic" to deliver this homespun wisdom: "We're not going to bow to Tea Party anarchists who deny the mere fact that Obamacare is the law. We will not bow to Tea Party anarchists who refuse to accept that the Supreme Court ruled that Obamacare is constitutional."
Where to begin? For starters, I know a great many self-described members of the Tea Party, and I've yet to meet one who would not acknowledge -- admittedly with dismay -- that Obamacare is the law. Nor have I met one unwilling to concede that the Supreme Court ruled that Obamacare is constitutional. Though from my informal polling, I can report that most think the court's reasoning left much to be desired (logic, persuasiveness, consistency, etc.).
Lurking beneath such lazy rhetoric is a nasty psychological insinuation that there's something deranged not just about opposing Obamacare, but about being a conservative. This is an ancient smear, used to discredit conservatives in order to avoid debating them.
Reid is a dim and sallow man whose tin ear long ago started to rust. But it's worth pointing out that "anarchy" is not defined in any textbook or dictionary I can find as "the absence of Obamacare." While, yes, it's true, most "Mad Max," zombie and other post-apocalyptic films are set in worlds without Obamacare, that's really not the most salient factor.
More to the point, petitioning Congress to repeal a bad law through formal procedures is not the kind of behavior educated people normally associate with anarchism.
Indeed, the hypocrisy of liberals who find it somehow "extreme" for citizens to organize peacefully to overturn a law they consider bad and unjust is a marvel to behold. The Fugitive Slave Act was once the law of the land. So was the Defense of Marriage Act. Were those determined to overturn them anarchists?
On an almost daily basis, I get a fundraising e-mail from a Democrat or from liberal outfits begging for help to overturn Citizens United, which in case you hadn't heard is the law of the land. Why won't these anarchists and extremists accept that the Supreme Court has ruled? I cannot wait for the Supreme Court to overrule Roe v. Wade, just to hear liberals announce, "Well, the fight is over. The Court has spoken."
Nearly the whole story of American liberalism is a story of dedicated ideologues seeking to overturn what they consider to be bad laws and replace them with good ones. Sometimes those efforts were laudable, as when they fought to overturn the doctrine of "separate but equal" (despite fierce opposition from Democrats). And sometimes they were lamentable, as when they routinely labor to overturn or deny school choice laws, consigning underprivileged children to horrible schools just to placate teachers unions. But when conservatives try to do the exact same thing, they can't simply be wrong, according to liberals. They must be demented extremists, anarchists and -- another favorite epithet these days -- nihilists.
The hypocrisy goes deeper though. Yes, Obamacare is the law of the land. But it is President Obama -- who is legally and constitutionally required to faithfully execute the law -- and not Republicans who has openly defied it. He has unilaterally and often with no statutory authority opted to waive and delay the parts of the Affordable Care Act that are politically inconvenient to him (or that his administration has been too incompetent to implement).
Obama has declared that in states setting up their own exchanges, no one will have to prove their income in order to sign up for subsidies. He is so desperate to get the subsidies rolling -- and hence, he hopes, buy support for the unpopular law -- he's willing to let people skip the part in the law where it says they have to prove they qualify for the goodies. He delayed the requirement for large businesses to comply with the law, because the initial turmoil of having millions kicked off their insurance plans was more than he could bear politically.
While this is closer to anarchy than anything the tea partiers have pushed for, anarchy still isn't the right word for it. Because President Obama still believes people should obey the law of the land -- when it pleases him, that is.
http://townhall.com/columnists/jonahgoldberg/2013/09/27/a-funny-definition-of-anarchy-n1710813/page/full
Posted by theodore miraldi at 8:10 AM