As Congress fights over the budget, agencies shop

As Congress fights over the budget, agencies go on their ‘use it or lose it’ shopping sprees 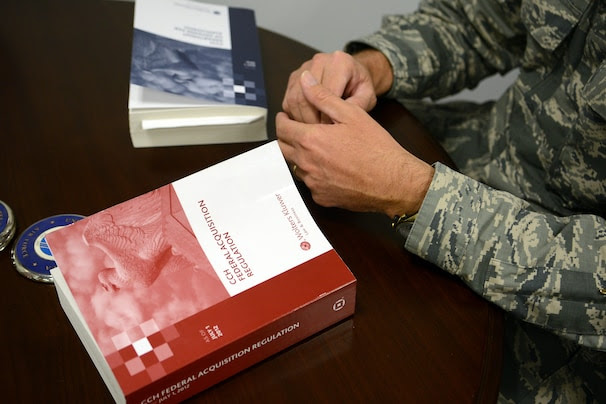 (Astrid Riecken/ For The Washington Post ) - Air Force Col. Kurt A. Bergo, director of contracting at Joint Base Andrews, speaks about the importance of using the Federal Acquisition Regulation manual.
By David A. Fahrenthold
This past week, the Department of Veterans Affairs bought $562,000 worth of artwork.
In a single day, the Agriculture Department spent $144,000 on toner cartridges.
Government shutdown 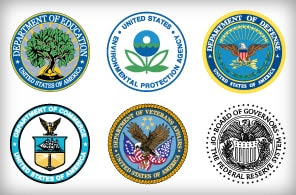 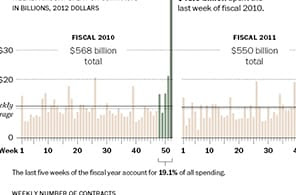 Agencies are rushing to spend their remaining budget before Sept. 30.
And, in a single purchase, the Coast Guard spent $178,000 on “Cubicle Furniture Rehab.”
This string of big-ticket purchases was an unmistakable sign: It was “use it or lose it” season again in Washington.
All week, while Congress fought over next year’s budget, federal workers were immersed in a separate frantic drama. They were trying to spend the rest of this year’s budget before it is too late.
The reason for their haste is a system set up by Congress that, in many cases, requires agencies to spend all their allotted funds by Sept. 30.
If they don’t, the money becomes worthless to them on Oct. 1. And — even worse — if they fail to spend the money now, Congress could dock their funding in future years. The incentive, as always, is to spend.
So they spent. It was the return of one of Washington’s oldest bad habits: a blitz of expensive decisions, made by agencies with little incentive to save.
Private contractors — worried that sequestration would result in a smaller spending rush this year — brought in food to keep salespeople at their desks. Federal workers quizzed harried colleagues in the hallways, asking if they had spent it all yet.
“The way we budget [money] sets it up,” said Sen. Tom Coburn (R-Okla.). “Because instead of being praised for not spending all your money, you get cut for not spending all your money. And so we’ve got a perverse incentive in there.” But, Coburn said, “nobody’s talking about it but me and you.”
Coburn said he had meant to mention it in his floor speech Wednesday. Then, when he got to the podium, he forgot.
“Use it or lose it” season is not marked on any official government calendars. But in Washington, it is as real as Christmas. And as lucrative.
And — it appears — about as permanent.
“We cannot expect our employees to believe that cost reduction efforts are serious if they see evidence of opportunistic spending in the last days of the Fiscal Year,” President Lyndon B. Johnson wrote to underlings in May 1965. Even then, Johnson said an end-of-year binge was “an ancient practice — but that does not justify it or excuse it.”
Today, government spending on contracts still spikes at the end of the fiscal year on Sept. 30.
In 2012, for instance, the government spent $45 billion on contracts in the last week of September, according to calculations by the fiscal-conservative group Public Notice. That was more than any other week — 9 percent of the year’s contract spending money, spent in 2 percent of the year.
Much of it is spent smartly, on projects that had already gone through an extensive review.
But not all of it.
In 2010, for instance, the Internal Revenue Service had millions left over in an account to hire new personnel. The money would expire at year’s end. Its solution was not a smart one.
The IRS spent the money on a lavish conference. Which included a “Star Trek” parody video starring IRS managers. Which was filmed on a “Star Trek” set that the IRS paid to build. (Sample dialogue: “We’ve received a distress call from the planet NoTax.”)
http://www.washingtonpost.com/politics/as-congress-fights-over-the-budget-agencies-go-on-their-use-it-or-lose-it-shopping-sprees/2013/09/28/b8eef3cc-254c-11e3-b3e9-d97fb087acd6_story.html

Posted by theodore miraldi at 8:04 AM