Aaron Klein
JERUSALEM – An adviser to the Department of Homeland Security has used his Twitter profile to defend the Muslim Brotherhood while accusing Egypt’s persecuted Christian minority of inciting against Islam.
Earlier this month, Mohamed Elibiary, who was appointed to the Department of Homeland Security Advisory Council by then-secretary Janet Napolitano in 2010, tweeted that he was reappointed and even promoted.

The Investigative Project on Terrorism reported Elibiary’s tweets about Egypt’s Coptic Christians.
“For decade since 9/11 attack extremist American #Coptic activists have nurtured anti #Islam & anti #Muslim sentiments among AM RT wing,” Elibiary wrote.
Earlier, Elibiary attacked the U.S. Coptic community for its protests against a wave of Muslim attacks on their relatives in Egypt. 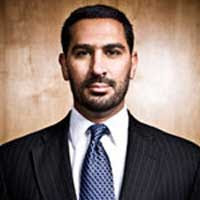 Mohamed Elibiary
“Good read by @mwhanna1 on need to reform #Coptic activism in #US including stop promoting #Islamophobia,” he wrote Sept. 14.
Michael Meunier, president of Egypt’s Al-Haya Party and a Coptic activist, reacted to Elibiary’s tweets.
“I think the Obama administration should be ashamed to have had someone like this in their administration,” he said. “This underscores the thinking inside the Obama administration.”
WND further found Elibiary tweeted in defense of the Muslim Brotherhood and its U.S. offshoots in an exchange with the Investigative Project.
“I treat MB objectively & w/ nuance. You define MB term too broadly, advocate 4 shutting down US Muslim orgs &treat all as ‘FACSISTS,’” he wrote.
Supporter of radicals
Elibiary is a strong supporter of the radical Islamist theologian who calls for “war” with the non-Muslim world and whose teachings inspired and continue to govern al-Qaida and Islamic terrorist organizations worldwide.
As WND reported, he spoke at a conference that honored the anti-U.S. founder of the Iranian Islamic revolution, Ayatollah Khomeini.
Elibiary has strongly criticized the government’s persecution of fundraisers for Hamas and is a defender of the Council on American-Islamic Relations.
He fervently endorses the teachings of Egyptian writer Sayyid Qutb, who is widely considered the father of the modern Islamic terrorist movement. Osama bin Laden and jihadist groups worldwide rely on Qutb for their fatwas and ideology.
Elibiary, meanwhile, has criticized the U.S. government’s prosecution and conviction of the Holy Land Foundation and five former officials for providing more than $12 million to Hamas, depicting the case as a defeat for the United States.
He wrote an op-ed in the Dallas Morning News suggesting the convictions were part of a U.S. government policy of “denying our civil liberties and privacy at home” while pursuing anti-terror policies that have “left thousands of Americans dead, tens of thousands maimed, trillions of taxpayer dollars squandered and our homeland more vulnerable than ever.”
The Homeland Security Advisory Council, part of the executive office of the president, was formed by an executive order by President Bush in 2002.
Qutb, executed in 1966 on charges of attempting to overthrow the Egyptian government, called for the creation of a worldwide Islamic state.
Qutb declared: “There is only one place on earth which can be called the home of Islam (Dar-ul-Islam), and it is that place where the Islamic state is established and the Shariah is the authority and God’s limits are observed.”
Qutb labeled the non-Muslim world the Dar-ul-Harb – the house of war.
“A Muslim can have only two possible relations with Dar-ul-Harb: peace with a contractual agreement, or war,” wrote Qutb.
“A country with which there is a treaty will not be considered the home of Islam,” he said.
Elibiary has regularly upheld the teachings of Qutb. He writes that he sees in Qutb “the potential for a strong spiritual rebirth that’s truly ecumenical allowing all faiths practiced in America to enrich us and motivate us to serve God better by serving our fellow man more.”
After Dallas Morning News editorial page editor Rod Dreher criticized Qutb’s writings, Elibiary engaged in a lengthy, published email debate in which he repeatedly defended Qutb.
In one exchange, Elibiary wrote, “I’d recommend everyone read Qutb, but read him with an eye to improving America not just to be jealous with malice in our hearts.”
Speaker at Khomeini conference
In 2004, as WND reported, Elibiary was one of seven advertised speakers at an Irving, Texas, conference titled “A Tribute to the Great Islamic Visionary,” celebrating the 16th anniversary of Khomeini’s death. Under a heading “Selected sayings of Holy Prophet,” one advertisement read: “Allah has made Islam to prevail over all other religions.”
In an interview with WND at the time, Elibiary claimed he was not aware of the event’s general theme and “tribute” to Khomeini.
WND directed him to an ad for the seminar posted on the Metroplex Organization of Muslims in North Texas website, which included a photo of Khomeini alongside a message speaking of “Islamic revolution.”
The leader of Iran’s Islamic revolution in 1979, Khomeini famously viewed the U.S. as the “Great Satan” and said, “Islam makes it incumbent on all adult males … to prepare themselves for the conquest of countries so that the writ of Islam is obeyed in every country in the world.”
Elibiary insisted it was the first time he had seen the flyer and, when asked, said he disagreed with the thrust of the message, a declaration of Islamic supremacy over the world.
It read:

“Neither east nor west” is the principal slogan of an Islamic revolution in a world of hunger and oppression and outlines the true policy of non-alliance for the Islamic countries and countries that in the near future, with the help of Allah SWT, will accept Islam as the only school for liberating humanity and will not recede or sway from the policy even one step.

“I don’t know what they mean by revolution,” Elibiary commented to WND, “but I see myself as a Westerner.”
Asked his view of Khomeini, Elibiary, reared in the U.S., said he didn’t know much about the Shiite leader and his revolution.
“All I know is what I grew up learning about it, the hostage crisis,” he said. “All I know about him is negative stuff. I have never read his writings. I never bothered to learn any positive stuff about his history.”
One speaker at the conference, reported Dallas–Fort Worth TV station KTVT, was a Washington, D.C., imam, Mohammad Asi, known for his radical views. Asi issued a strongly worded anti-American, anti-Jewish speech in which he said American imperialism and pro-Israel Zionism are “diabolical, aggressive, bloodthirsty ideologies that are trying to take over the world and destroy Islam.”
Another speaker at the conference, a 10-year-old boy, opened the tribute by praising Khomeini for reviving “pure” Islamic thinking and saving the religion from being conquered by the West, reported CBS-11. The boy called President Bush “the greatest enemy of the Muslim Ummah,” or community, KTVT reported.

Read more at http://www.wnd.com/2013/09/dhs-adviser-to-persecuted-christians-you-incited-muslims/#WIAlui7tu6bBg5hk.99
Posted by theodore miraldi at 7:46 AM