Jobs recovery is nowhere near where it should be 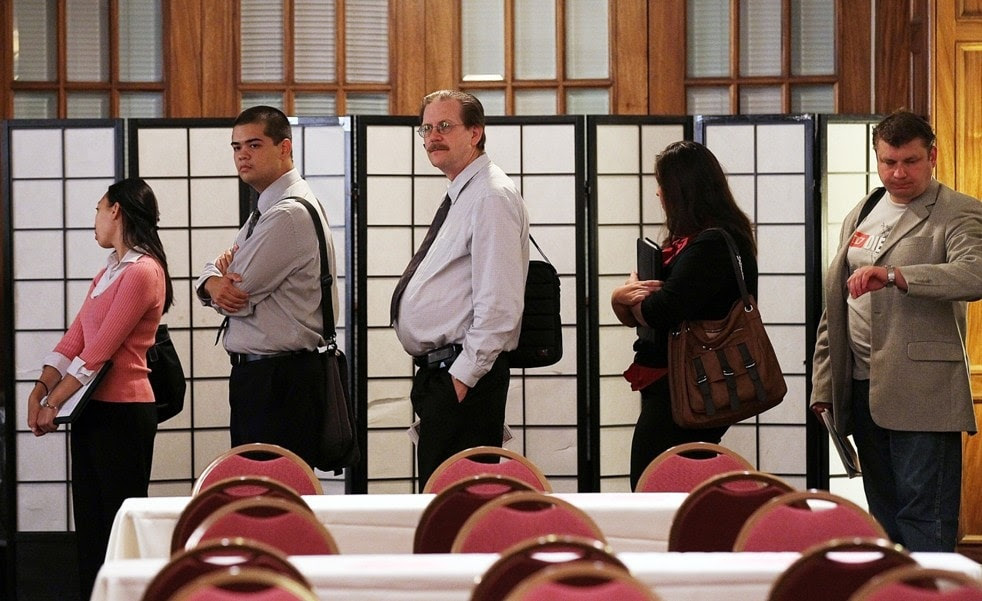 Job seekers meet with recruiters at a job fair in San Francisco. (Credit: Justin Sullivan/Getty.)
By Niraj Chokshi
Only one state is adding jobs faster than it’s adding people.
That state is, you guessed it, oil-rich North Dakota. Every other state in the nation has what economists call a jobs deficit—a shortfall between where the economy is and where it should be.
It’s true that Friday’s monthly state unemployment numbers had some good news. Unemployment fell in 17 states from July to August, according to that Labor Department data. But it also rose in 18. And, yes, 36 states saw unemployment fall from August 2012 to August 2013. But states have a long way to go to recover what was lost in the recession while keeping pace with population growth.
“It matters how many jobs you’re creating in what context. You need to know how many jobs you should have created just to sort of stay at neutral,” says Doug Hall, director of the Economic Analysis and Research Network—a group of state and local policy organizations—at the liberal Economic Policy Institute. “You’re really only doing well if you’re actually ahead of that benchmark.”
Nevada, for example, has the biggest jobs deficit, according to EARN data shared with The Washington Post. The state was hit hard by the housing crisis and remains nearly a fifth—18.4 percent—short of where it should be on jobs in order to be fully recovered from the recession while keeping pace with population growth..
Florida, another state stung by the housing crisis, was next with a 12.8 percent jobs shortfall. Hawaii, Arizona and Wyoming followed with employment at 12 percent, 11.1 percent and 11 percent short of where it should be, respectively.
At the other end of the spectrum is North Dakota, the one state where jobs are being added faster than the population is growing. The state has 9.7 percent more jobs than it needed to both recover from the recession and keep pace with population growth.
West Virginia has the smallest shortfall of any state at 1.3 percent, followed by New York at 1.5 percent. Vermont has a 1.9 percent deficit, while South Dakota is next at 3 percent.
Economists debate what constitutes a full recovery or whether we should even expect one. Some have argued that the so-called natural rate of unemployment—there should always be some people out of work or waiting for the right job—may have shifted up because of the recession. Though the consensus appears to be that it hasn’t changed.
And while 49 states have a jobs deficit, there are also questions about the value of the jobs being added.
“We don’t know anything about the quality of jobs that are created,” Hall says.
Women, for example, have a lower unemployment rate than men, but much of those gains appear to have come from low-paying jobs such as waiting tables.
In other words, it’s not clear the quality or quantity of jobs being added at the state level is where it needs to be.