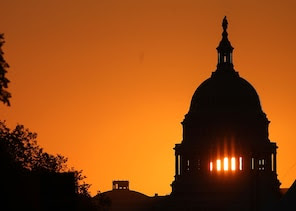 
By Karen Tumulty and Paul Kane


With little more than a week to go before a potential government shutdown, Washington feels like a car without a driver on a road without a guardrail.
As it hurtles toward the edge, no one — conservatives, GOP leadership, congressional Democrats, the White House — seems to have a way to stop it.
Lurching from near-calamity to near-catastrophe has become a way of life in the capital, which has stood at the edge of a financial precipice at least four times since the end of 2010.
What makes these crises all the more exasperating is that none of them seem to resolve the political and ideological disputes that cause them. All they do is put both sides on a course toward the next disaster zone.
The one immediately ahead arises from the fact that the fiscal year will end on Sept. 30without Congress having passed any of the spending bills needed to keep the government in operation going into 2014.
Without at least a stopgap funding bill,most nonessential federal operations will come to a halt.
Benefits payments, such as Social Security checks, would still go out, and critical functions such as national security would continue. But military pay would probably be delayed, hundreds of thousands of federal employees would be furloughed and attractions such as national parks would close.
“After five years spent digging out of crisis, the last thing we need is for Washington to manufacture another,” President Obama said in his weekly address Saturday, noting the fragility of the economic recovery. “But that’s what will happen in the next few weeks if Congress doesn’t meet two deadlines.”
The most pressing issue is a demand by conservative groups and tea party lawmakers that any spending measure include a provision that would strip funding for the health-care overhaul, which is set to kick into gear on Oct. 1.
The Republican-led House has passed a bill that would accomplish that, but it stands no chance in the Senate, which is virtually certain to send it back “clean,” meaning with full funding for the law that is known as Obamacare.
Even if they figure a way around this stalemate and keep the government open, a graver crisis is coming up quickly on its heels as the government hits the limit of its borrowing authority some time in mid- to late October. If Congress does not raise the debt ceiling, it could force the nation into default and the global financial markets into chaos.
Conservatives and tea party activists insist that Republicans will be rewarded for going to the barricades to stop the health-care law.
And just about every poll shows that, three years after its passage, Obamacare remains unpopular with voters. In the latest Washington Post-ABC News poll, 52 percent said they disapprove of the law; only 42 percent said they support it.
But Americans are even less enchanted with the idea of bringing the government to a halt as a means of blocking Obamacare.
The Republicans’ own numbers show that. In a recent survey conducted by David Winston, a pollster who advises the House GOP, 71 percent said they opposed “shutting down the government as a way to defund the President’s health care law.” Only 23 percent approved.
http://www.washingtonpost.com/politics/as-shutdown-and-default-loom-crisis-mode-becomes-washingtons-new-normal/2013/09/21/dd06feae-21fe-11e3-966c-9c4293c47ebe_story.html
Posted by theodore miraldi at 10:48 AM