'One takes a deep breath and reboots the entire system' 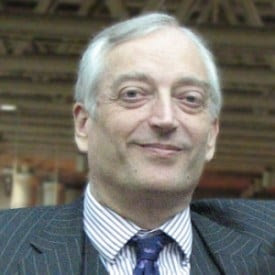 John Griffing
Christopher Monckton of Brenchley – who advised Prime Minister Margaret Thatcher, wrote for the Yorkshire Post, was managing editor of the Telegraph Sunday Magazine and is now a columnist for WND – long has warned that the West is on a terminal financial course, from which recovery eventually will not be possible.
In a recent commentary, he wrote that it’s not a matter of “whether but when.”

More than a year ago, he told WND that the financial collapse of the West was plausible based on its path at the time. He then adjusted the forecast from “plausible” and “likely” to “imminent.”
Specifically, he believes President Obama’s financial policies of unprecedented borrowing and spending, trillion-dollar deficits and massive outlays for social engineering are an “existential threat.”
“The gravy train has now tipped into the gulch. The cash for such criminal indulgences has run out. It is now time for governments everywhere to get a grip on the costs inflicted upon taxpayers by governmental employees at every level. Unless this is done, and very soon, the West will fail,” he said.
Now he’s moved beyond.
“Forget the dollar. It is finished. America needs a sound currency. The easy option would be to adopt the Canadian dollar, for hard-headed, common-sense Canada avoided the foofaraw of nonsensical credit-default swaps and dodgy derivatives that brought down the sillier banks,” he said in a recent interview.
Monckton doesn’t stop with suggestions of Canadian monetary integration, however. He suggests a complete “reset” of the American financial system.
“There is a more dirigiste solution, which I prefer much less than the free-market solution. … It is possible simply to cancel all public and private debt and tell everyone to start again. One takes a deep breath, presses the RESET button and reboots the entire system,” he said.
“The Emperor Augustus did this in ancient Rome, and the result was 400 years of prosperity, notwithstanding the flashy and often spectacularly incompetent absolute tyrants who succeeded him,” he said. “Again, the more recent precedent is in postwar West Germany in 1948, when Mr. Erhardt, then the finance minister, waited until the occupying Allied commanders were away for a weekend’s shooting and called in the Reichsmark, replacing it with the Deutsche Mark. Everyone was given 50 new Deutsche Marks and told to get on with it.”
Financial analysts are aghast at the idea, but Monckton dismisses such concerns, again reaching into history.
“When Gen. Clay, the U.S. commander of the occupying forces, got back after his weekend and found out what had been done [in Germany], he called at the Finanzministerium and said, ‘Herr Erhardt, my advisers tell me you’re making a terrible mistake.’ Erhardt’s famous reply: ‘Don’t worry, general: mine tell me the same.’ Again, the rest is history. Germany, even after enduring the staggering cost of rebuilding East Germany upon the happy reunification of the nation, remains Europe’s economic powerhouse.”
In addition to advancing currency reset as a serious option to save the American economy, Monckton also cautions average Americans that their government is not being honest about the implications of its lopsided financial relationship with China.
As Monckton explains, America’s present position is that of foreclosure, and the bank is repossessing.
“The mandarins of Peking know that there is a growing likelihood – make that a near-certainty – that any money they now lend to the United States will never be repaid. In the commercial world, when it becomes clear that a debtor may never be able to repay, the creditor demands a debenture by way of fixed and floating charge over the entire assets and undertaking of the debtor. Has Obama granted to China a debenture over the assets and undertaking of the United States?”
The Chinese central bank already is taking action, forming bilateral currency swap arrangements with other trade partners, drastically reducing the number of dollars that will be used in global commerce.
Russia also has been reducing its reserve holdings of dollars for some time and is publicly advocating, along with China, international control of the dollar’s value or that some international monetary unit be devised to replace the dollar.
Total net American liabilities to the rest of the world now stand at more than $80 trillion. At the same time, the Net International Investment Position (NIIP) now stands at negative $2 trillion.
WND has reported that China now owns significant public infrastructure in the contiguous United States and has requested public land and “special economic zones” free from U.S. labor controls as collateral on future loans.
Gao Xiqing, head of the largest Chinese public owner of U.S. debt, had this to say in the wake of the 2008 financial collapse, echoing Monckton’s sentiments: “I have great admiration for the American people. Creative, hard-working, trusting, and freedom-loving. But you have to have someone tell you the truth. And then, start realizing it. And if you do it, just like what you did in the Second World War, then you’ll be great again. … But many people are betting on the other side.”
Gao, president of China Investment Corp., recently told Atlantic Monthly: “Think about the way we’ve been living the past 30 years. Thirty years ago, the leverage of the investment banks was 4-to-1. …Today, it’s 30-to-1. …This is a change of fundamental thinking. People, especially Americans, started believing that they can live on other people’s money. … First, other people’s money in your own country. And then the savings rate comes down, and you start living on other people’s money from outside. …Okay, we’d love to support you guys – if it’s sustainable. But if it’s not, why should we be doing this?”
Monckton ultimately believes that whatever the fate of the U.S. dollar, and whatever solution America adopts, the real problem is not economic or political but moral.
“The crisis of the West is not primarily a financial crisis, or a crisis of democracy, though these crises are real and existential. It is, above all, a crisis of morality.”