'Next time, let it be your sons and daughters' 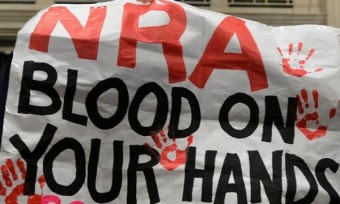 A University of Kansas journalism professor who suggested that the sons and daughters of National Rifle Association members would be good targets for a crazed killer has been suspended.
According to a report Friday at Campus Reform, which first uncovered the comment, school officials suspended David Guth in an announcement by KU Chancellor Bernadette Gray-Little.
The statement said, “In order to prevent disruptions to the learning environment for students, the School of Journalism and the university, I have directed Provost Jeffrey Vitter to place Associate Professor Guth on indefinite administrative leave pending a review of the entire situation.”
The statement said Guth’s classes will be taught by others.
The school also now is taking a position on Guth’s comment, which he made on a private Twitter account earlier in the week after a dozen people were shot at killed by a gunman at the Washington Navy Yard.
“#NavyYardShooting The blood is on the hands of the #NRA,” tweeted Guth, part of the university’s William Allen White School of Journalism.
“Next time, let it be YOUR sons and daughters,” he continued. “Shame on you. May God d— you.”
Said the university, “The contents of professor Guth’s tweet were repugnant and in no way represent the views or opinions of the University of Kansas. [I]t is truly disgraceful that these views were expressed in such a callous and uncaring way. We expect all members of the university community to engage in civil discourse and not make inflammatory and offensive comment”
Commenter “AJ” responded to the professor’s tweet, “Shame on you. I bet you think of yourself as a Christian while you are asking God to d— people and wishing their children dead.”
Campus Reform caught the statement, and writer Katherine Timpf said when Guth was contacted about it, he not only confirmed he made it, he doubled down.
“Hell no, hell no, I do not regret that tweet,” he told Campus Reform. “I don’t take it back one bit.”
In fact, after “AJ” criticized his statement, Guth said, “That moronic logic defies description,” and “God’s justice takes many forms.”
The school’s website notes Guth is an associate professor in the William Allen White School of Journalism and Mass Communications. He holds a bachelor’s degree from Maryland and a master’s degree from North Carolina-Chapel Hill.
“He served associate (sic) dean of the school from July 2004 to July 2009 and as chair of the school’s Strategic Communication track from January 2000 to August 2003.”
It lists several awards he’s been given, including the “Del Brinkman Teaching Award.”
Guth previously was a public information officer for the North Carolina prison, probation and parole system, a broadcast journalist and private public relations consultant.
Campus Reform reported that Guth continued the conversation on his personal blog, Snapping Turtle.
“I don’t wish what happened today on anyone,” he said on the site. “But if it does happen again – and it likely will – may it happen to those misguided miscreants who suggest that today’s death toll at the Navy Yard would have been lower if the employees there were allowed to pack heat.”
In his interview with Campus Reform, Timpf reported, he wished “a pox on our Congress and a pox on the NRA” for failing to have more gun control.

Read more at http://www.wnd.com/2013/09/professor-crazed-shooters-should-target-these-kids/#7yjDBcOXMbZTCwII.99
Posted by theodore miraldi at 3:40 PM