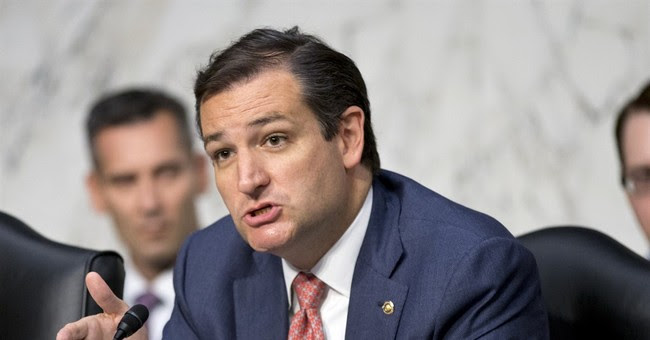 Jonah Goldberg
Ted Cruz is no Joe McCarthy, as so many liberals bizarrely claim. But he might be the conservative Barack Obama.
The charge that he's the new McCarthy is something of a compliment from liberals. It means they don't like him, can't really explain why and need to demonize him instead. In other words, he must be doing something right.
For conservatives, the comparison to Obama probably stings more than the McCarthyite smear.
But think about it. Both men have impeccable educational credentials. Obama went to Occidental College, transferred to Columbia University and got his law degree from Harvard. Cruz went to Princeton University, where he was a national champion debater, and got a law degree from Harvard. Cruz's legal career was objectively more impressive than Obama's. He clerked on the appellate court and for Chief Justice William Rehnquist on the Supreme Court. He held numerous prestigious jobs in and out of government. Like Obama, he taught law, but Cruz was also the solicitor general of Texas and argued before the Supreme Court nine times.
National Review editor Rich Lowry identified one plausible source of elite liberal hatred for Cruz: betrayal. "Cruz is from the intellectual elite, but not of it, a tea party conservative whose politics are considered gauche at best at the storied universities where he studied. He is, to borrow the words of the 2009 H.W. Brands biography of FDR, a traitor to his class." (I hate to correct my boss, but Brands didn't coin that phrase).
What liberals hate in Cruz, they love in Obama: a product of an elite education who confirms all their feelings of superiority. Obama took the desiccated ideas of campus liberalism and made them seem vibrant, stylish and even populist.
There are other similarities. But the most relevant one comes in their similar approach to politics (not political philosophy, where they are light years apart).
Both landed in the U.S. Senate, running with larger ambitions in mind and promising to be unstinting champions of their party's principles.
Moreover, both grasp that historically the Senate whittles away presidential timber. Like John F. Kennedy, Obama was there just long enough to run for president. And while Obama was there, his chief goal was burnishing his presidential image, not racking up legislative accomplishments. Cruz has been a senator for eight months, and he already looks like a presidential contender.
In 2012, Obama said the "most important lesson" of his first term was that "you can't change Washington from the inside." You need populist pressure from the outside. This was an odd claim on two counts. First, it's not true. His signature achievement, the Affordable Care Act, was an entirely inside affair, an ugly partisan one involving mercenary horse-trading and countless backroom deals with industry and unions. Second, Obama, the community organizer, always believed salvation lay in organizing a movement. It was the premise at the heart of his 2008 campaign in which he told adoring throngs, "We are the ones we've been waiting for." It says something about Obama's arrogance that his biggest lesson from his first term was that he was right all along.
Still, this conviction led Obama to turn his presidential campaign into a private political army intended to rally his base for his legislative agenda. That effort has failed utterly. Organizing for Action couldn't even organize a congressional vote on gun control, never mind a win.
Cruz's fight to defund Obamacare rests on a similar outsider approach using the Tea Party and allied groups. As he recently told radio host Hugh Hewitt, "The strategy on this all along has been directed not towards Washington but towards the American people. It has been directed towards building a grassroots tsunami."
If Cruz's effort fails -- and I fear it will -- it will be for the same reasons that Obama's second term has been such a legislative dud. The way you bring change to Washington is through elections. After the elections, change comes from the unsightly process of consensus-building (aka sausage-making). Both Cruz and Obama have shown little interest in that approach.
Of course, there are huge differences between Obama and Cruz -- the most important is that they have completely divergent philosophies. That matters most, but it isn't everything. The inside game matters too. Cruz likes pointing out Obama's failures; he should also learn from them.
http://townhall.com/columnists/jonahgoldberg/2013/09/25/ted-cruz-the-gops-obama-n1708863/page/full
Posted by theodore miraldi at 8:12 AM