In the zoo, they speak animal 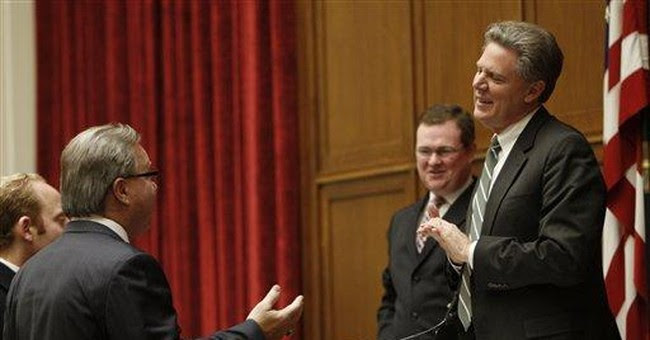 "I will not yield to this monkey court or whatever it is" -- Frank Pallone (D) from New Jersey used a word that only a democrat is allowed to use in Washington during hearings to get to the bottom of the Obamacare exchange fiasco.
His ire and that of some of his colleagues belies his basic obligation as a lawmaker to protect Americans, not ideologies or failed websites that mask failed policy.

This has been one of those weeks. Rep. Grayson of Florida sends out an email with a burning cross that compares the Tea Party to the Ku Klux Klan. I hadn't heard monkey court before, but there were a lot of animal sayings that come to mind when thinking about the behavior of Democrat lawmakers this week.
Other animal sayings that we happen to be familiar with:
That comment was certainly a rabbit punch, illegal in civil society and an evil accusation.
President Obama not demanding an apology is like an ostrich with his head in the sand, but since he has orchestrated the public relations war against that grass roots organization, the Commander in Chief was probably happy as a clam.
If there were proper media coverage, perhaps an apology would be forthcoming, but it would be crocodile tears, so why bother except that's what human beings do.
Grayson is a wildcard, and we know leopards can't change their spots, but this guy is kicking up a hornet's nest.
Some see Grayson and Pallone as bold as coots, just strained at the leash, but the anger and hate they supposedly decry drips off them in plain sight. They cannot be written off as bats in the belfry.
In the end, chickens always come home to roost, and this law is a disaster. The greater disaster is the unrelenting campaign to rip America apart. The hatred in the air is deliberate and stinks.
But we should never forget a fish rots from the head down. Some think President Obama's real legacy goal is the comeuppance of the "haves" through a campaign of contained rage and fanning of fear and anger. By allowing this kind of language and divisiveness, the White House turns all of Washington into a kangaroo court.
He cannot continue to be an innocent bystander, occasionally trying to break up the fight he instigated in the first place.
I don't think these guys could hit an elephant at any distance in an intellectually honest environment, so it's hateful imagery and buzzwords.
In the end, Obamacare-to quote President Obama-is more than a (failed) website. It's an idea never fully thought out, rammed through Congress against time and rules and now being foisted upon an unsuspecting public. It's all going to come out in the end, and that's not too far from where we are now. As the hits keep coming President Obama will be a broken but noisy lame duck, watching his signature achievement become his swan song.
In the final analysis, if you wonder when the top dog will issue a real mea culpa, his answer is ... when pigs fly. So we'll play this wild goose chase game of hearings and finger pointing and blame until the cows come home.
News Flash: The Obamacare exchange clocked in at over $1,000,000,000 ... cat got your tongue?
The Market
I have a news flash, despite one business network that's completely in the tank for President Obama, the market was never spooked by the government shutdown. There was angst over the debt ceiling forcing resolution in Washington, but the market had no issue with cutting non-essential workers. In the end, they got a paid vacation and many unemployment checks as a bonus. That's not going to hurt the economy, and the stock market knows as much. Right now the market is moving on to better corporate earnings and, for now, to a lesser extent to a friendly Federal Reserve.
Rocking on earnings after the bell:

* Amazon (AMZN) revenue: $17.09 billion consensus $16.77 billion
* Microsoft (MSFT) earnings per share: $0.62 beat street by $0.08
* Zynga (ZNGA) loss $0.02; Street looking for double
* Deckers (DECK) beat by $0.23
* Calloway Golf (ELY) beat by $0.10
The better news is all these companies say business will continue to do well. In an underperforming economy it speaks volumes that business keeps finding ways to stay afloat and churn out products and services we like.
http://finance.townhall.com/columnists/charlespayne/2013/10/26/in-the-zoo-they-speak-with-animal-words-and-phrases-n1732170/page/full
Posted by theodore miraldi at 10:27 AM